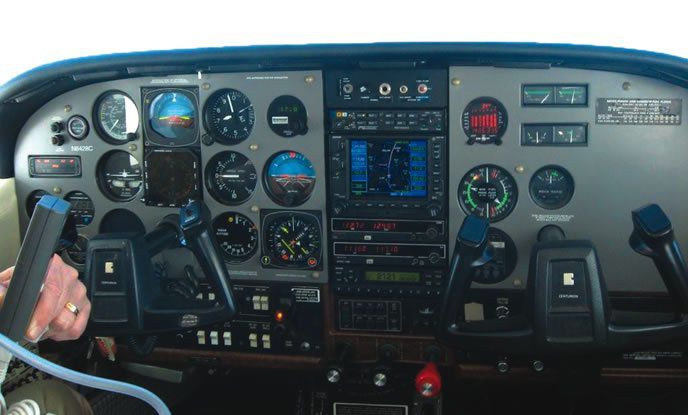 On page 14 of the February issue (“Glass Panel Scans“), you state that “a case can be made” for flying track instead of a heading assigned by ATC. This I have to hear.

When a controller assigns me a heading, that is what he wants me to do, and doing something else would seem to constitute failure to follow an ATC instruction. Your thoughts?

That depends how literally you follow the the reg about ATC instructions. They say “heading” but they’re trying to achieve course, which is track.

If it’s a busy terminal environment with lots of traffic and a controller calling the same heading again and again, they’ve probably got the wind correction dialed in. But that’s not usually the case. More often they use a standard, no-wind heading and then watch your progress and correct with heading changes. If you fly track, they never need to correct. We’ve done it many, many times and never had a controller complain.

I had to write to tell you how much I liked “Flying With a TAA Mindset” (March 2010 IFR). Your description of understanding the big picture, maintaining multiple options and negotiating with ATC en route correlated perfectly with my own experience.

My “TAA” is a 33-year-old 182, but I have a Garmin GNS 530W for navigation and XM weather on a GPSMAP 396 for “strategic planning.” I wrote up a couple of flights on my blog last summer that were flyable only because of the capability inherent in this equipment.

I love the pub. Keep up the great work.

I love the publication and the color is great. I just wanted to remind you that not everyone has a “TAA” or a G1000. I notice that more and more of the articles and color pictures are of “glass.”

There are still some of us that are using (and, I would venture to say, “most of us”) the now infamous “steam gauges.” Please don’t forget about us!

Don’t worry, we’ll try to curb our excitement about showing NEXRAD in full color. Look for some old-school IFR articles in coming issues.

It’s the Clouds that Matter

In the February 2010 IFR “What is Minimum Fuel?“, The author states, “As an instrument pilot on an IFR flight plan, you’re mandated by FAR 91.167 to take off with enough fuel to fly to your destination, fly to an alternate airport, and then fly for an additional 45 minutes at cruising speed.”

You are only mandated by FAR 91.167 in IFR conditions—this should be “IMC,” but I’m quoting the reg here—not just being on an IFR flight plan as the author indicated. An IFR flight plan and IMC, as we know, are not the same.

Let me add that I really like the new colors and format of IFR. Kudos for a job well done.

Switching on the Fly

During a recent IFR cross-country with my instructor, I ran into a dilemma on the proper way to create a new flight plan while en route on an existing flight plan. We had filed two IFR flight plans prior to departing, one for the trip from Carlisle, Penn., (N94) to Johnstown, Penn., (KJST) and another for the trip back from Johnstown to Carlisle.

We originally planned a full stop at Johnstown after several practice approaches but decided that neither of us needed to stop and we would just request our clearance back to Carlisle while in the air.

We went missed on our final approach at Johnstown and were navigating to the MAP (LEDBE) as published. Once we contacted Cleveland Center, we requested clearance back to Carlisle. We received “cleared as filed,” and this is where the question begins. Since the GPS (a Garmin 430W) was being used to navigate to the MAP, what is the best method to put the new flight plan in? We did not enter it previously and save it in the flight folder, which would have helped, but this same situation would arise if we had to go missed for real and divert to an alternate.

Hopefully this is clear enough of an explanation. I enjoy IFR magazine and look forward to new issues.

You have several options, depending on what you want to do. The easiest is to go direct to the fix in your flight plan or the new destination (with the direct-to button) and then delete the flight plan. The system will retain the direct-to fix and you can make a new one from there.

You could also build a flight plan as a stored plan and activate it when you’re ready. This helps if you’re holding at the current fix and it’s more than just direct-to navigation. You can also use crossfill after building a flight plan on a second GPS if you have two installed.

Flying without a Plan?

In “The Parenthetical Fix” (February 2010 IFR), I found an interesting discussion, but one that may miss the point. What is a CFI doing taking a student across the mountains VFR at night without having done full research about his route and how to identify it?

I fly a Cirrus with the new R9 avionics, and the airways and all waypoints on them are automatically entered on my flight plan. But, I never depart without being familiar with any significant detail, such as a turn in the mountains at night. What was he/she thinking? I hope you scolded the letter writer.

Thanks for providing a though-provoking publication,

In “Hocus Focus in Vermont” (March 2010 IFR), the author states, “the LOC Z requires the CHITT FIX minimums to be increased for an inoperative MALSR,” and again, “The lower altitude and visibility is why you must have a working MALSR.”

I’ve briefed the LOC Z approach until my eyes blurred (I like Hocus Focus exercises), but can’t find a specific reference to “MALSR out” in the minimums section. I do see split visibility minimums in LOC Z for “ALS” out (add 1/4 mile, which curiously doesn’t apply to “RAIL” out, which is a component of MALSR), but no reference to a different minimum MDA(H) altitude dependent on “MALSR.”

Did I miss something? Please help me out here so I can keep my confidence level high enough to continue to safely fly challenging approaches in IMC.

Love your magazine. I always find my brain working hard to keep up with your detail level as you consider many interesting ramifications of flying IFR in IMC on intense approaches.

On NACO plates the changes is referenced in the notes section at the top of the plate when it’s non-standard. Jeppesen lumps the MALSR into the category “ALS out” in the minimums section. The article mentions it separately because it was originally written with NACO plates but it was switched near the print deadline. We didn’t get to rewording it.

Got sumptin’ you want to say? Send it our way at