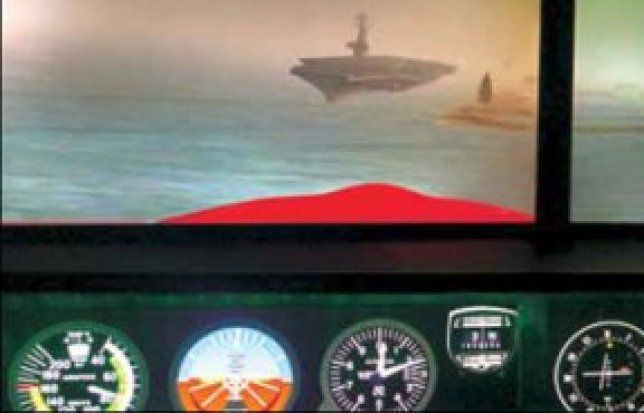 Landing Downwind?
Have any other nitpickers written about the illustration on page 15 of your November 2014 issue accompanying the “Simulators Are Not Airplanes” sidebar? The author of the very good article writes about how “we developed our own VOR approach to a carrier in San Francisco Bay.” And the illustration shows a small plane at 200 feet and 75 knots airspeed, headed straight for a carrier deck, apparently on final approach.

However, any old Navy man like myself knows that the superstructure on an aircraft carrier is always on the starboard side and that this aircraft is about to land in the wrong direction, bow to stern. Maybe this wrong-way approach was part of some teaching process, but there’s no indication in the article that anyone knows what’s up.

No, uh, you’re the first nitpicker, Neil. From the author:

Ha! I regret that my ignorance of carrier operations showed; we were just looking for a fun way to expand the training envelope. Thanks for the correction. While our intent isn’t to train carrier pilots, but to illustrate the requirements for a stabilized approach, I must apologize to the U.S. Navy for any negative training.

I Have To Report That?

I liked Evan Cushing’s article “Required Reports” in October, 2014.
When holding during training the dialog with ATC usually goes something like this:

Me: “Approach, Cessna 80872, we’d like to make a couple turns in the hold on this missed approach for training.”

Approach: “Roger, let us know when you are done with the hold.”

This is all basic stuff that makes sense so far, including the required report entering the hold. After a couple turns, the student says he’s seen enough and we should now go shoot the ILS.

At this point, I’d like to just read back the vector and altitude, and start turning to the heading. But I have learned that the student is ready to pounce with a self-satisfied smirk and an admonishment that leaving the hold is a required report. So now to keep peace I always start with “Approach, Cessna 80872, leaving the hold.”

What does ATC want? Seems to me that just reading back the vector tells them I’m leaving the hold. Seems to me that because I’m still in radar contact the controller is not going to vector me into a hill.

You ask a valid question, and it illustrates only one of probably thousands of inconsistencies or disconnects between strict regulatory compliance and practical, everyday operations.

OK, you’re in the hold. You know it. The controller knows it. Everybody’s happy. You now ask to leave the hold and the controller gives you a heading and altitude. Does he know you’re leaving the hold? Of course—that’s the point of the whole conversation. However, the regs are clear—you report leaving the hold.

Similarly, say you’ve been at cruise at 11,000 for the last few hours and you get a descent. The regs require, even in radar, you to report leaving that assigned altitude. Almost nobody does and probably fewer even care.

The controller knows what’s up. Nonetheless, it’s still a good habit to make those reports, even leaving altitudes, entering and exiting holds, etc. as required. Much of the time you’ll get a rather bewildered “Uh, thanks,” in response. Once, when asking a controller if he cared about those reports, his reply was a simple “Nope.”

The following question came up recently at our flight school, and the AIM is a little less than direct in its answer. When making a tear drop entry to a DME hold, should the entry leg be flown for 1 minute or the DME distance mandated by the hold?

The protected airspace for a hold is positively enormous, so from a safety standpoint, it likely doesn’t matter. However, the precision involved in a properly executed DME hold is far higher than with a timed hold. Since the rest of the hold will be flown using distance as the measure, it doesn’t make much sense to start off using time. You’ll get a much closer/better initial inbound leg if you use the leg distance as the distance of your teardrop entry.

What’s Different?
I hope you can shed some light on a question I have regarding the KSBY ILS or LOC Runway 32 approach. The procedure includes an alternate missed approach fix, yet it shows the same fix as the regular missed approach, and it includes exactly the same fix identification information. All I see is extra clutter that tells me nothing new, what gives?

The alternate missed approach fix and procedure are designed so the underlying approach doesn’t become NA when an otherwise non-essential navaid goes INOP.

Both of these require the SBY VOR to be in service. But, what if it goes INOP? This is why there’s an alternate procedure. In this unusual case, the alternate uses the same procedure and the same fix, but shows two more ways to identify COLBE: I-SBY @ SWL R-021 and I-SBY @ SBY D6.6. Noting that DME can remain operative while the VOR is INOP, this alternate procedure fulfills the requirement.

There is one more note about this approach that’s probably worth mentioning. This approach doesn’t require DME because COLBE can be identified using SWL. If SWL went INOP, you’d probably see a NOTAM requiring DME for this approach, as distance would be the only way to identify COLBE.