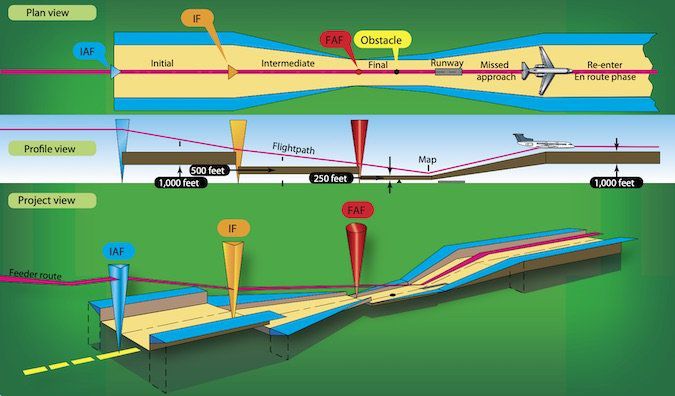 With winter flying in full swing, I wanted to share some thoughts I share with other pilots.

1. If you don’t get IFR (“The magazine for the accomplished pilot”), you should. It keeps the juices flowing and is chock full of insights mainly for instrument flying.

2. I think we get the instrument rating mainly to learn more about weather flying (beyond scud running in marginal VFR, or worse). Once we have “learned” a lot about weather and how to safely get through the clouds on the way up and then again on the way back down, we learn how to carefully plan an IFR flight, and how to work with ATC to make that plan work quite well most of the time. Only then, do we know so much we don’t scud run anymore, and don’t fly in really bad weather anymore either—sometimes scared to make iffy trips because we now know more about “ice” and other bad stuff.

3. The article on Page 9 of the November issue (“TERPS 101”) is full of detail about how approach charts are created. Even admitting that sometimes rare chart mistakes occur (pilot beware!), mostly, we can fly the charts down to a safe landing, assuming our plane’s equipment is all working, but we should be aware—very aware—that there might be obstacles just below us in the clouds, so don’t push it.

These words at the end sum up the article’s intent: “…the critical point to take away is that every one of the details that are found on those forms and our approach charts is there for a reason. For instance, if you notice something different about a procedure, such as an ILS that doesn’t have a 200-foot decision height, or a missed approach point some distance from the runway, that should be a cue to you that something is going on behind the scenes. “

” …the backstory about how those details are determined and how much obstacle protection you’re afforded will make it easier to blindly trust the procedure next time you’re in the soup, and make you think twice about second guessing it.”

I noted an interesting change to the Instrument Rating ACS released back in June last year. It used to be that per the ACS, a circling approach required a heading change of at least 90 degrees from the final approach course to the landing runway. That requirement is now gone, replaced with the requirement to “Visually maneuver to a base or downwind leg appropriate for the landing runway and environmental conditions.” Also, new language was added saying the pilot must not bank over 30 degrees.

I believe these are positive changes that you might want to know about.

But, I Fly at Night

Thanks for “TERPS 101” in the November issue. But I’m still seeking a clue as to why all approaches are NA at night to KLNS Runway 13 and 31. An unlit obstruction? Non standard runway markings? The local controllers and a local FAASTeam rep are wondering too.

Thanks. Keep up the great work.

We asked our resident TERPSter. He dug into it and replied:

“This is due to multiple unlit 20:1 visual area penetrations (trees) off the ends of those runways. One possible way to mitigate that could be to require use of the VGSI. That requires the VGSI surface to be clear, and for the operation to be approved by Flight Standards.”

So, if you want an approach at night, chop down those trees!

I’ve been a long-time subscriber and endured more than a few articles about the Skew-T chart. I’ve spent many hours trying to get them. I still don’t.

Am I your only reader who just doesn’t understand these charts?

I get that they’re probably a useful tool to use before a flight to get a good understanding of what to expect. But, even with the chart in one hand and multiple articles in the other, it takes me longer to get anything out of these charts than the flight would take.

How about Skew-T for the non-meteorologist? And if that doesn’t work, stop teasing me with articles about a cool tool that I can’t use.

By the way, I’ve never had a Skew-T discussion with a fellow pilot when considering a flight. So, I don’t think I’m in the minority here.

Yes, the Skew-T Log P diagram is a dense presentation of a lot of information. You are not alone in not understanding it, or not understanding it well. Because of your note, our resident meteorologist will take another stab at it with a working title of “Skew-T Simplified.”

As you can see from “Just Ahead” on Page 2, this is slated for next month. It looks like it’ll be a two-part article, with the first part going over the basics again, and the second part a step-by-step on how to apply it—kind of a “see this, expect that” approach. We hope this proves more helpful.

But, please understand that this isn’t a diagram you can glance at and instantly get an idea of the weather; it does take practice and some analysis.