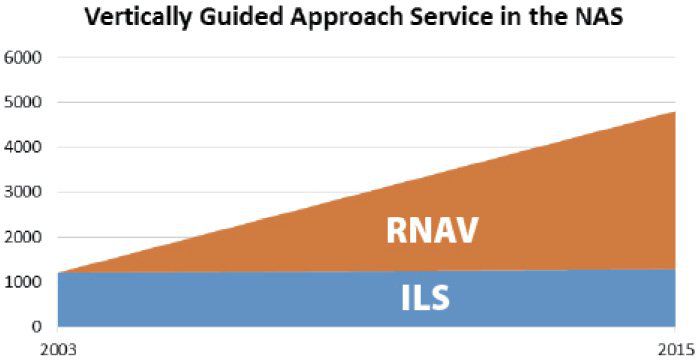 First, the FAA decommissioned 479 NDB procedures in 2005, saving around $8 million a year. The under-300 associated stations owned by the FAA were far beyond their planned 20-year service lives. Then they implemented the VOR Minimum Operational Network (MON) Program to retask and reshape Victor airways into a downsized backup network should GPS fail. That plan will decommission 311 VORs by 2025.

The FAA wants as many approaches with vertical guidance as possible. Statistics show that a pilot is four times more likely to have a CFIT accident flying a non-precision approach than one offering vertical guidance. Having trimmed the low-hanging fruit, the FAA is looking at the Sacred Cow, the ILS.

First deployed in 1938, the ILS has become the global gold standard of instrument approaches. There are 1550 Category I ILS approaches in the U.S. at this writing. About 1700 localizer-only procedures are also on the block.

More than 70 percent of the ILS equipment is beyond its 20-year service life. Most are Thales Air Traffic Management (TATM) Mark 20A’s, the only certified unit until 2005 when the FAA contracted with TATM to develop a new version. In 2014 the FAA ordered five new ILS-420s, under a new five-year contract.

The contract won’t add more systems, but will replace systems damaged or broken beyond repair. About five new systems per year are needed. The FAA must justify each one by a cost-benefit analysis. For example, sustainment expenditures are calculated to last 20-30 years from the last swap date for each ILS considered.

The Case for LPVs

An LPV is a software construct. It’s not free, but it’s much less expensive than an ILS. An LPV is a one-time expense plus a minimal cost to manage it. As an FAA engineer told me, “It’s all in the math.”

Perhaps its greatest virtue is that it makes possible high-quality vertically guided approaches at thousands of airports where an ILS is too pricey. LPVs make it possible for smaller and especially remote communities to receive reliable air service and help knit those communities into the air transportation fabric.

GPS approaches evade all the expenses that plague a ground-based navaid. An ILS has a high initial cost with its accessories and critically, antennas. An airport must allocate real estate. Someone must appropriately site each component and provide for power. The system, especially the antennas, constitute surface obstructions near a runway.

Virtual approaches have no depreciation, need no power (or backup), have no operation or on-site maintenance expenses that lengthen downtime. There is no expensive two-year mandatory flight inspection since only ground-based navaids are flight inspected.

The DoD and the FAA centrally monitor GPS and WAAS, respectively. Indirectly they watch all LPVs, obviating the need for costly remote control and monitoring of all ILS equipment. Should an ILS component fail, it flags us in 8-12 seconds. An LPV flags in 6.2 seconds or less.

We rarely consider the adverse attributes of ILS because we uncritically accept its shortcomings as “it is what it is.” Take a fresh look, and you can see all the extra care and caution an ILS requires compared to an LPV.

Operationally, there is no problem with active LPVs at both ends of a runway, whereas an ILS cannot be used simultaneously at both ends due to possible interference. Nor is there a back course localizer and its awkward away-from-the-needle correction. Gone is the detritus of a bygone era: dashes and dots, compass locators, and marker beacons, to name a few.

All the ILS course distortions we live with vanish when there is no signal to distort. False glideslope signals on either a localizer back course or a front course approaching glidepath intercept cannot occur on an LPV. ILS occasionally fools pilots with bogus courses and reverse sensing at angles well above the published glidepath.

Nor is there an ILS critical area when the weather is below 800-2. No more do we have to cope with unmonitored critical areas at nontowered airports where vehicular traffic could cause needles to wobble and the autopilot to deviate if flying a coupled approach.

LPV approaches provide range information natively. But an ILS requires a low-power DME, and not all are so equipped—nor are many GA aircraft.

A point favoring ILS is that if the glideslope fails, the pilot can sometimes opt for the localizer approach. With an LPV, it’s all or nothing.

Pilots get the message. LPVs are designed to fly like an ILS. If there is a choice between the ILS and the LPV, more and more of us opt for the LPV.

In 2015, the FAA began looking to “rationalize” ILS approaches. In this context, “rationalize” means “cut.” The following year, the FAA developed a cost/benefit quantitative model and conducted an analysis at about 2900 airports with few or no RNAV SIDs or STARs. The finished product was a plan to decommission Cat I ILS approaches at some of these airports between 2020-2030. Before a decision was reached, the project was shelved in 2017.

Early in 2019, plans were drawn to restart the program with a strategy decision late that year. As of mid-December 2019, there was no public announcement. Once announced, it will appear in the Federal Register for comments and feedback. The FAA says that discussions with stakeholders will be critical. Timewise, site identification could start this year and might extend beyond 2032 as larger airports are “rationalized.”

The FAA said in early 2019 that ILS approaches could even be discontinued this year. But the longer it takes the FAA to make its decision, publish it, evaluate comments and respond, the later cutting can begin.

The 132 ILS approaches in the VOR Minimum Operational Network will remain until a seamless NextGen replacement is flightworthy. Development, let alone deployment, won’t even begin until 2026-2030. MON ILS approaches will be with us for a long time.

The scope of the project includes rationalizing ILS only at airports where an LPV approach provides redundancy. ATC keeps a record of approaches flown under IFR, but not practice approaches. The FAA can decommission an ILS if it turns out that the LPV is the primary approach in use. No vertical guidance will be lost, as that would be contrary to the FAA’s goal of adding approaches with vertical guidance.

Before rationalization halted in 2017, the FAA analyzed 402 ILS/LOC approaches at GA airports. The estimate for removal ranged from 167 to 292. Total savings would be $246M to $430M, respectively, over 20 years.

There will be no wholesale shutdown of ILS approaches in the foreseeable future. The numbers imply that if enough pilots fly LPVs, the LPV could move from being secondary to the ILS to become the primary approach, and the ILS would become, well, redundant.

To give you an idea of annual traffic volumes needed for retention, analysis of these 402 approaches called for 6200-plus flights using an ILS to be worth keeping. The possibly retained ILS approaches required about 2000, and the removal zone was around 1400. Perhaps this means that if we want to save an ILS, then we must fly it more—under IFR if we want it to count.

The numbers drill down to estimate whose ox gets gored. If the FAA removes an ILS and 25 percent of users lose vertical guidance, that speaks strongly in favor of keeping it. The FAA might retain the ILS if 21 percent lose the horizontal needle, a considerable difference for only a few percent. In the remove category, only eight percent would lose out.

The attractiveness of ILS lies in the relative economy of its equipment costs, and its pervasive worldwide endorsement. Advances in technology over many years have yielded significant improvements in accuracy, dependability, and maintainability. The fact that ultra-precise ILS Cat II and III approaches use essentially the same system is a tribute to its sturdy simplicity and the genius of its designers.

Even so, this dog has had its day. The operational and financial benefits of LPV are compelling. The FAA will likely cut 200-plus ILS approaches over the next five years. After more than 80 years of robust service, it’s the beginning of the end for ILS.

Fred Simonds, CFII, has gone over to the dark side and now cherishes those newfangled LPVs.