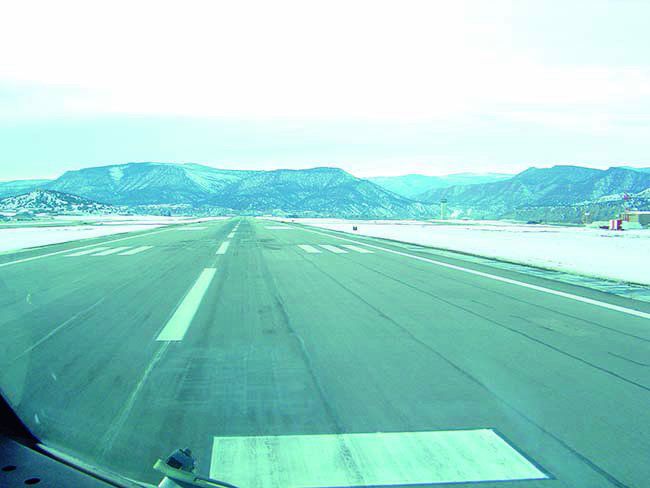 Like Mr. Smith, I am a professional and I would never tell anyone to be below minimums, in IMC conditions, relying on a VFR chart to avoid obstacles, all while trying to fly a single-engine profile. Encouraging pilots to accept this risk is irresponsible. The chance you’ll go single-engine at the moment you rotate into IFR conditions is indeed slim, but I can think of few other times when the consequences of poor decision making could be so dire.

I didn’t intend to come off as cavalier, simply realistic. In the article I acknowledge the fact that the likelihood of having to deal with such a situation is extremely low, yet non-zero. It is therefore up to the individual pilot to balance the risk vs. benefit.

For instance, when I flew freight a few years ago, most of my time was in the single-engine turboprop Cessna Caravan. If you tank an engine in that, obviously you won’t be making any kind of positive climb gradient. Does that fact imply that IMC departures in that aircraft are inherently irresponsible? All aircraft operations come with some risk, and the most important job of professionals is to properly manage that risk.

Some minor points on Lee Smith’s otherwise excellent article, “Over the Line With eAPIS” (December 2009 IFR).

First, as far as prefiling eAPIS, CBP does not care if you’re late taking off as long as it’s “same day, same way.” If you file for 9 a.m. and won’t be airborne until 11, they don’t need a new filing. But if you’re going slide to tomorrow, you must refile. Just make sure that before you take off, you call the arrival CBP office to give your real ETA, no matter what you filed on eAPIS.

The FAA and CBP just don’t care about FCC licenses. FAA Inspectors are specifically enjoined not to check radio licenses, and to hand them back to the pilot unexamined if presented without request. CBP officers have told me that radio licenses are not on their list of items to check, but pilot and aircraft registration certificates are. Neither Canada nor the Bahamas require the radio licenses, so you can go there and back without them. Beyond the Bahamas, I know for sure that the Turks and Caicos requires and checks radio licenses (pilot and aircraft).

Finally, if you’re pressed for time on the CBP decal, some CBP airport offices have them on hand for over-the-counter sale. If they do, you can pick one up on the way out or even inbound, but you must call ahead to confirm availability. The CBP guide for aviators (see the AOPA website for the link) has the phone numbers.

Please make clear to everyone that eAPIS is for the benefit of the U.S. only. Yes, you have to file a manifest both inbound and outbound but this system does not notify Customs in other countries. You must still notify them directly by phone or other means.

Travelers to Canada arriving in private, company-owned, or charter aircraft carrying no more than 15 people (including the crew), must call the telephone reporting centre (TRC) to get authorization from CBSA to enter or return to Canada. The number is 1-888-226-7277 (1-888-CAN-PASS).

You Can Go a Lot Lower

In “Missed at the Beach,” (November 2009 IFR) Dan Lawson says, “Do the PAPI and runway-edge lights constitute enough to drop 100 feet below the MDA when there’s nothing but grey just beyond …”

If the author is referencing 91.175, please note that operation below MDA based on visible and identifiable runway characteristics is 100 feet above TDZE, not 100 feet below MDA.

You produce a great magazine. Thanks.

You’re right. On a full 200 and 1/2 ILS or LPV those numbers would be the same (well, 100 feet below DA actually) but for most other approaches 100 feet above TDZE would be significantly lower than 100 feet below MDA.

In the November 2009 IFR Readback “A Problem with Direct,” a reader wants to know if he is required to do the published hold for course reversal. I have found that approach controllers will vector me to the approach but will not declare that they are providing vectors to final.

A few years ago I was IMC and doing one of my first GPS approaches so when I got to the initial approach fix I entered the hold and proceeded outbound. ATC contacted me with, “Where are you going?” or something like that. I realized later that ATC was actually providing vectors and the intercept was inside the initial approach fix, which caused the GPS to sequence to the final approach fix when I was not expecting that to happen. The point is you can be receiving vectors to final without it being stated.

Why do we call GPS approaches RNAV? When GPS approaches started coming out, we called them GPS. Then all of a sudden, they became RNAV (GPS) and now I have to continuously clear up the confusion with my instrument students.

The FAA is actually being forward-thinking here. The idea is that the approach as charted will work for any aircraft that has appropriate Area Navigation (RNAV). Right now the only approved RNAV for the approach is GPS, hence “RNAV (GPS).” But in the future other systems could be approved for the same procedure without having to create a whole new approach. There are already approaches that say RNAV (RNP) ,meaning they can be flow by any system that meets the Required Navigation Performance, or RNP.

My ILS Got Elitist

The FAA broke my local ILS 24 approach at KSGH when they revised it so that the FAF requires either DME or RADAR to identify it instead of the crossing radial we had before (and still on the VOR 24). I’m an old /U.

You would think that the designation as RADAR would take care of this but when I asked Approach if they would call it for me, they said, “Only on a workload permitting basis.” AIM 5-4-7 (g) says, “Pilots should not rely on radar to identify a fix unless the fix is indicated as RADAR on the IAP.” What should I expect? Do I have to ask whether they can call the FAF before I start the approach?

Thanks for an outstanding rag.

DME/RADAR is only required to identify JENAT and COBAG. You’d only need those fixes to fly the full procedure or the localizer-only approach. If you’re getting vectors for the ILS, then you can fly the approach without DME or ATC’s further assistance. You would need DME or get ATC to call the fixes for you if the glideslope was out or you flew the procedure turn, and ATC is under no obligation to do so if they’re too busy.