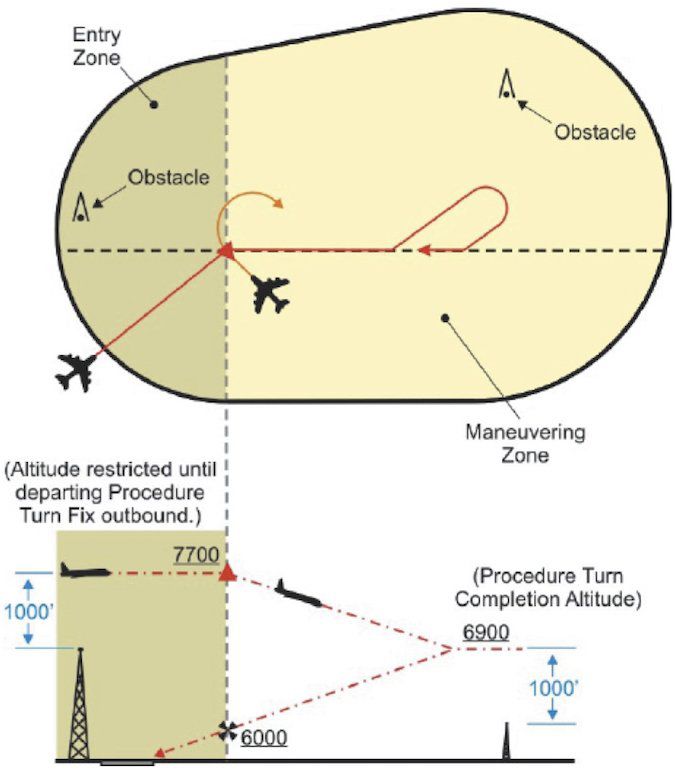 You’re flying your Turbo Bugsmasher on a dreary flight to an out-of-the-way country airport. The controller doesn’t seem to be the chatty type and clears you direct to the IAF/IF and issues your approach clearance. There’s a procedure turn depicted at that fix, but your course to the IAF/IF is close to the final approach course. Do you fly the procedure turn or just turn onto final and get in five minutes earlier?

This scenario would likely get a heated discussion among instrument pilots at your next hangar-flying session. One camp says that the procedure turn should be flown since that’s what that the regs indicate. The other camp says that’s a waste of time since it would take more work and maneuvering to turn around than just make the slight turn onto final. Both sides make a reasonable case, so what should you do?

Procedure turns have existed mostly in their current form since the earliest days of instrument flying—they were used on four-course radio-range approaches—and they’re not terribly complicated. Much of the confusion has come from vaguely worded and occasionally conflicting regulations over the years. This provides a perfect opportunity to create the old wives tales and hearsay so common in hangar flying. Let’s dig in and set the record straight.

Looking Under the Hood

Course reversals come in three flavors: the traditional procedure turn, the hold-in-lieu-of procedure turn (HILPT), and the teardrop (or penetration) turn. Regardless of the type of course reversal used, they all exist for the same basic reasons: allowing arriving aircraft, when necessary, to reverse direction and get established inbound on an initial, intermediate, or final approach course. They also give arriving aircraft an opportunity to lose excessive altitude while remaining within a defined area.

Teardrops are pretty rare (See “Driving All Night,” October 2017.) and permit aircraft to reverse course and lose a significant amount of altitude within a defined area (these are often found at military or joint-use airports). These are entered at the initial fix, proceeding outbound on the defined radial, and initiating a turn inbound at the defined point or distance. Think of it as a conventional procedure turn, but usually much larger and with explicitly defined segments.

The type of course reversal used depends on the constraints and objectives of the procedure. When a HILPT or teardrop is used, it must be flown exactly as charted. The traditional procedure turn, however, provides a bit more flexibility for both the designer and the pilot, so it’s our primary focus here.

Procedure turns are designed in two pieces. The maneuvering area gives obstacle clearance in an area defined by the maximum entry altitude and the procedure-turn distance. Usually any entry altitude is permitted, but restrictions can allow for a smaller protected area. (Pay attention if there are entry altitude restrictions.) The standard distance is 10 NM, but can be as large as 15 NM (usually for Category E aircraft), or as small as 5 NM (restricted to Category A).

Entry from the en-route environment is somewhat variable based on the details of that particular approach and your direction of flight. In general, though, it’s as simple as flying to the procedure turn fix either directly or via a feeder route, then turn outbound (often over 180 degrees). The rest of the procedure is as charted.

A common notion about procedure turns is that pilots are permitted to fly the course reversal however they choose, so long as they remain within the procedure-turn distance. Unlike HILPT or teardrop course reversals, pilots are given discretion in how they fly a traditional procedure turn. The 45/180 reversal is what’s depicted on government and Jeppesen charts, but other common variations include an 80/260 reversal, a teardrop, or a racetrack. These are certainly allowed, but the rules aren’t quite as lenient as they might seem.

AIM 5-4-9 .a.1 states “the point at which the turn may be commenced and the type and rate of turn is left to the discretion of the pilot (limited by the charted remain within xx NM distance).” That’s pretty straightforward, right? It sure sounds like as long as you stay within an area having a radius equal to the procedure turn distance centered around the procedure turn fix, you can maneuver however you want. That’s not entirely accurate though.

In a related note, many CFIIs teach instrument students to time the legs of a procedure turn (for example, two minutes outbound, one minute on the barb). Once licensed, these former students may want to continue to follow this technique. Timing of procedure turns can be a reference for spacing, but should not be followed blindly. Higher performance aircraft, strong winds aloft, or a shorter than usual procedure turn distance can cause a timed procedure turn to depart the protected airspace. Also keep in mind the speed restriction of 200 KIAS after passing the procedure turn fix.

To PT or NoPT

The rules are actually pretty clear about when to fly the thing. We’re told by 14 CFR 91.175(j) that a procedure turn is not allowed without ATC clearance when receiving radar vectors to the final approach course or fix, making a timed approach from holding, or when the procedure specifies “NoPT.” “Ah ha! It doesn’t say we need to fly it in the first place, just when we don’t have to fly it,” you might be thinking. But wait; there’s more.

AIM 5-4-9 tells us “the procedure turn or hold-in-lieu-of-PT is a required maneuver when it is depicted on the approach chart, unless cleared by ATC for a straight-in approach.” That’s pretty straightforward. If a procedure turn is published and you don’t fall into one of the buckets defined in 14 CFR Part 91.175(j) or receive a straight-in approach clearance, you’re expected to fly it.

As we’ve shown, there are cases where a procedure turn is required but doesn’t make sense given the orientation of the aircraft to the procedure turn course. In these cases, hopefully ATC would have given you a straight-in clearance, but if they haven’t, just ask. Either you’ll get it, or you’ll find out why they want you to jump through an additional hoop.

In both cases, everybody will be on the same page, which is the most critical part. Similarly, if you have a lot of altitude to lose but are arriving on a NoPT segment or on a straight-in clearance, just request approval to fly the procedure turn, explaining you need the extra time and distance to descend.

So an ATC clearance in the form “cleared straight-in VOR/DME Runway 30 approach” tells us not to fly the procedure turn. Unfortunately that introduces yet another potential for confusion.

What if you were planning to circle to another runway at the completion of the approach? That would make the clearance “cleared straight-in VOR/DME Runway 30 approach circle to Runway 12.” It makes sense if you parse it out, but if you’ve got your hands full flying the airplane, having “straight-in” and “circle” in the same clearance seems like it’s asking for trouble. Again, if it’s confusing, clarify with the controller.

One last frequent point of confusion: When ATC clears you for the approach, they instruct you to “report procedure turn inbound.” When is that exactly? Some say it’s when you complete the course reversal; others say it’s when you’re established on the inbound segment.

A quick check of the Pilot/Controller Glossary settles this by defining it as “that point of a procedure turn maneuver where course reversal has been completed and an aircraft is established inbound on the intermediate approach segment or final approach course.” So ATC wants to know when you’re established on the inbound course with positive course guidance, not when you’re maneuvering during the reversal.

Hopefully this settles the debate about how procedure turns are intended to be flown, and gives you some basis for educating pilots at your next hangar-flying session. Keep in mind though that pilots and controllers are all human, and not everyone does things exactly by the book all the time. This is why 91.123(a) has the catch-all, “When a pilot is uncertain of an ATC clearance, that pilot shall immediately request clarification from ATC.” If there’s any doubt, it’s our responsibility to clarify what is expected of us.

When preparing to fly a procedure turn, there are a couple critical pieces of data that should be briefed, since there can be quite a bit of variation in how procedure turns are defined. Here’s a handy decoder ring.

First, note where the thing starts. Look at the profile view to see where the descending outbound line begins. The line also contains the outbound course. This tends to be better than looking at the plan view because in some cases the way the barb is drawn can make it difficult to tell where it originates. Occasionally procedure turns have minimum (line at the bottom) and/or maximum (line at the top) entry altitudes defined, which will be shown near the start point on the profile view.

Last, look for where the thing ends. The procedure turn completion altitude is found at the end of the descending inbound line. (Not shown here.) This will usually be at the final approach fix, but could also be at the intermediate fix. This is the lowest altitude to be flown once you have positive course guidance inbound. The inbound portion can also have stepdown fixes with required altitude restrictions before reaching the completion altitude. Note that although most procedure turns are completed at the fix or point where they began, this isn’t always the case.

In short, the easiest way to brief a procedure turn is to simply follow the descending line on the profile view, it’ll make sure you hit all the stuff that you need to know to fly it.