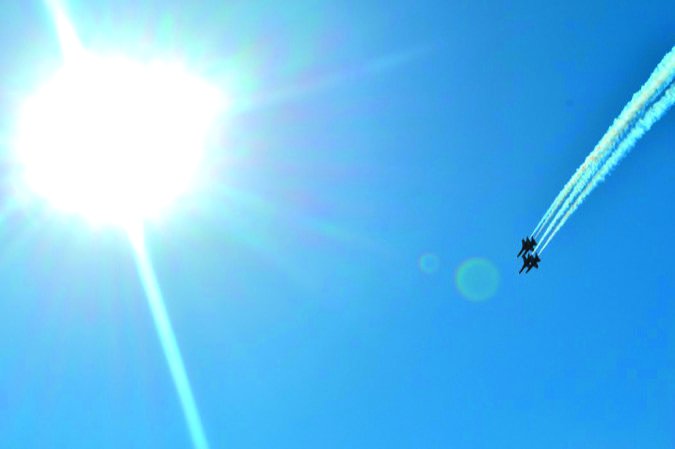 When average Americans wake up and go to work every day, they expect to see mostly the same faces, same routine, the same stuff—like the expression “same stuff, different day” suggests. When pilots and air traffic controllers go to work, it’s often the same coworkers in the room or cockpit, but we both work with people on a daily basis that we have most likely never met. In fact, the chance that a center controller has met a pilot that they talk to on the radio is miniscule. Tower and TRACON controllers might have a somewhat higher chance.

That being said, how well does each of us work with all these “new” guys. A few of us adapt quickly, but some of us really struggle with the relationship with an unknown person on the other end of the radio. Pilots who adapt quickly often have a good understanding of the role of ATC and their myriad, often confusing, procedures.

Of the controllers who adapt quickly, many are pilots themselves, like me. In the tower, more than once, I’ve checked landing gear because someone else was not. When I asked why they weren’t, I was told, “Well they are going to land one way or another right?” That’s not the kind of all-in-this-together attitude I like to see.

You might assume that a large number of controllers are also pilots. If so, you’d be wrong; we’re a significant minority. Those of us who are active pilots and controllers connect with the voices of pilots, understanding the needs and stress being experienced up there. But, if not…

Tension or conflict between a controller and a pilot happens more often than you think. From time to time we get that one person who woke up on the wrong side of the bed. Plus, occasionally there’s a pilot or controller who acts exempt from the rules. Clearly, all this is unprofessional but it happens. The result is to create greater tension than the situation itself would merit. On rare occasions, this tension, this minor disagreement, can elevate to open conflict—on either side—that can easily affect safety. Sometimes a pilot will simply get my goat and I might yell at him, but off frequency so only my bemused coworkers hear me.

We each have our important roles. Even if you’re just flying for your own purpose, that purpose is important to you. Of course, professional pilots are responsible to move massive amounts of cargo (human and material); and ATC exists to facilitate all those flights in a safe, orderly, and (believe it or not) expeditious manner.

Controllers, be they tower, radar, or center, all have the same duty when they plug in—get people and goods from Point A to Point B safely, even if it occasionally means someone has to go to Point C first. When a pilot whines or, worse, argues, it does not help get the job done, and most of the time simply sounds childish. The same goes for the controller who scolds a pilot on frequency for an innocent mistake or misunderstanding.

Any time I come across a fellow pilot or controller who seems especially intolerant or is acting superior, I gently try to remind them (offline, of course) that they should rethink that attitude—we all make mistakes. Again, it’s not worth it for someone to lose their life or for a controller to go to prison (it’s possible).

I personally make more mistakes than I can count, but as long as I adapt to the mistakes I make, it’s more natural to work better with pilots. For example, I’ve often reminded pilots to set the transponder to “ALT” on departure and have been reminded by pilots in my pattern if I forgot about something. “Tower are we cleared to land?” I was recently training an experienced controller who transferred to my facility. His flow was excellent until one of the student solos stopped responding to radio calls. My trainee focused all his attention on the NORDO, ignoring the other six. I stepped in, worked all the aircraft and gave the NORDO a green light to land.

I discussed this with my trainee. “Surely you understand that radios break sometimes, and you still have to keep the big picture.” It turns out he’d never been in a small plane, and indeed didn’t really understand what pilots must handle with any kind of failure at all, let alone a comms failure like this pilot was handling (better than my trainee, as it turns out). After some persuading, we went flying, and he now has a much better understanding of what goes on up there.

Ultimately, of course, everyone’s goal is a safe outcome. However, within that, pilots and controllers often have different needs, different objectives that they’re each trying to meet. A center controller, for example, typically must sequence traffic to a given terminal with specified spacing, preassigned speeds, and on a designated route, regardless of how that pilot might wish to get there.

The pilot, of course, is usually trying to minimize time and costs, or has training objectives, all of which might not smoothly fit into the controller’s requirements. All these potentially conflicting objectives can occasionally rise to hostility—hostility that often originates from everyone doing their job but not understanding the other. That’s where these articles come in handy so you understand a bit about how ATC operates.

A controller who knows nothing of flying is at a disadvantage, being unable to really understand some of the stresses in the cockpit and how some of the controller’s instructions can add to that stress. In the extreme, one might even create a hazard that needn’t have been there. A controller who understands pilots is better able to work with the pilots to achieve smother operations on both sides, and ultimately a safer environment.

In reality most controllers do have a good idea of what pilots do and are quite adept at working with a pilot whenever possible. Similarly, most pilots have a reasonable understanding of the demands of air traffic control and do their best to be part of the system, not part of a problem.

We’re In This Together

Where is this all going? This is not intended to sound negative, but it is intended to point out that both pilots and controllers can get so focused on their own immediate objectives that they lose sight of the bigger picture involving the other participant in this orchestra of air traffic. If we’re able to develop more of a rapport, more of an understanding of the overall need for that safe, orderly, and expeditious flow of traffic, the whole system might work better. It’s like that old Native American saying about walking a mile in another man’s moccasins.

While we have one of the world’s safest systems, any accident at all that could have been prevented, should be. Some accidents are simply human error, such as a stall close to the ground or a controller turning someone the wrong way. As a controller, I could not live with myself knowing that I could have done something more to prevent an accident. As a pilot, if I survived an accident, I sure hope it wasn’t a controller’s fault, and that nobody on the other end of the radio could have done anything differently to improve the outcome.

Every pilot should have at least one friend who’s a controller, and vice versa. Don’t know a controller? Go meet one. In most ATC facilities, the FAA permits, even encourages, tours for individuals and groups. Don’t have a group? Try just phoning your local facility and asking if you can come visit. We love visitors.

You could start with the nearest tower. Most GA towers have a rather relaxed pace and welcome visitors. Got a busy tower with a TRACON or a center nearby? Better yet, but that might need a bit more coordination to get in for a visit.

Enjoy the tour and be engaging. Ask a lot of questions and bring up some war stories. Perhaps you’ll hit it off with one of the controllers and find a new friend. Offer to take him or her flying. It’s guaranteed that you’ll both learn a lot.

Another avenue is to phone the facility and ask if someone can talk to your group. Ask that controller to talk about problems they see at their facility and ask how you can better work together to enhance the “safe” and “orderly” part of everyone’s job and maybe even re-interject a little of that expeditiousness.

Been There … Done That

With experience on both sides of the microphone, I’m often able to bridge the knowledge gap between pilot friends and my controller co-workers. The biggest problem I run into is when one or the other acts like they’ve reached the pinnacle of their profession and there’s nothing left to learn. Another hurdle I’m tired of jumping is keeping the peace between pilots who fly the heavier iron and controllers who are just trying to do their jobs and keep them safe.

We see this all the time, although this example is more blatant than most. Due to a combination of circumstances having nothing to do with either aircraft, we had a fast mover sequenced behind a slower aircraft. Upon telling the fast mover to slow and sequence behind the slow mover, the pilot of the fast mover objected and was even reluctant to comply. After a lot of grumbling on frequency, it was his turn to land. But in his frustration he’d not maintained adequate spacing behind the slower aircraft. He was too close to land.

Tower told him to go around. Again, he objected. Again the go-around instruction was given. After his reluctant go around and subsequent landing, he called Tower to find out why he received “bad” service. Tower was having none of his attitude and pointed out that there were three possible outcomes to this situation. First, the controller could have let the original spacing dissipate and allow him to land, potentially resulting in a collision on the ground. Second, the pilot could have complied with the original instruction to slow for adequate spacing and would have landed without the go around. Finally, having ignored the sequencing instruction, his impatience was rewarded with a practice circuit of the traffic pattern. Tower also pointed out that landing safely and going home to his family shouldn’t be defined as “bad” service just because he wasn’t first.

The pilot pressed the point, saying he flew bigger airplanes and was the reason the controller had a job. There is only so much that one person can do to contain a vigorous, um, “discussion” so Tower let it go. The more reasonable view of aviation is that pilots transport the world and controllers coordinate the activities of all those pilots, helping them arrive safely.

The best outcomes are achieved by working cooperatively, playing our part, and understanding that we all have much more to learn, maybe even today.

At an early age, Elim Hawkins was conflicted. He wanted to work in those awesome towers at the airport, but also wanted to be flying. So, with the help of the military, he did both. Now he enjoys training controllers and helping pilots understand the intricate workings of ATC.