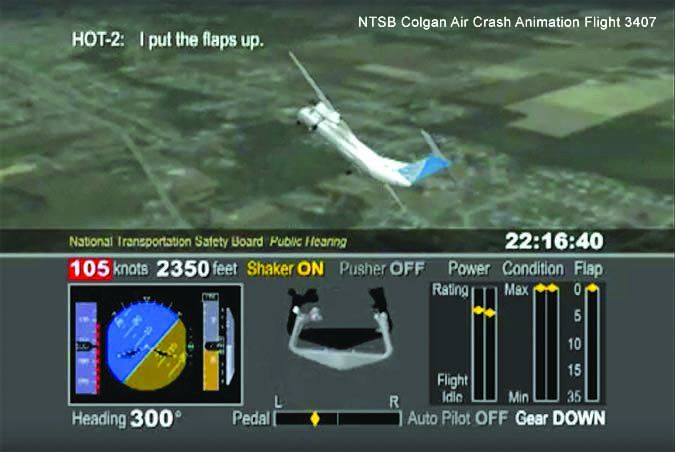 In the 1968 classic science fiction movie “2001: A Space Odyssey,” a computer named HAL operated and monitored a spaceship bound for Jupiter. Everything was fine until the autopilot (HAL) went berserk and killed all but one of the crew. That crewmember survived by killing HAL.

To assume that an aircraft automation system has a will of its own and will try to kill us would be anthropomorphic. Autopilots and other automation systems have not reached that stage of sophistication. Not yet.

What can—and too often does—happen, however, is that flight crews turn the flying duties over to the autopilot and relax. With frightening repetition, this ends in disaster.

When I started working at the corporate pilot training center, the flight crew positions were identified as Pilot Flying (PF) and Pilot Not Flying (PNF). Pilot Not Flying seemed to imply that this “other” pilot did not have any responsibility. He was just along for the ride.

What did not happen, apparently, was explaining to the PM exactly what the PM was supposed to do. As a result, most of the time the PM just handles communication with ATC, tunes the radios, watches for traffic, and generally acts as a helper for the PF.

Consequently, there is no monitoring of the status of the aircraft. As a result, there have been numerous accidents where the flight crew simply assumed that the autopilot was going operate the aircraft safely, and failed to intercede when it didn’t.

This has been a problem for decades. On December 29, 1972, an Eastern Air Lines Lockheed L-1011 crashed at Miami, FL, resulting in 101 fatalities. The probable cause according to the NTSB was, “the failure of the flight crew to monitor the flight instruments during the final four minutes of the flight, and to detect an unexpected descent soon enough to prevent impact with the ground.”

On December 20, 1995, an American Airlines, Boeing 757, crashed into mountainous terrain 38 miles north of Cali, Columbia. The accident investigation determined that among the probable causes of the accident were, “The lack of situational awareness of the flight crew regarding vertical navigation, proximity to terrain, and the relative location of critical radio aids.” In other words, the crew did not monitor the position of the aircraft.

On February 12, 2009, a Colgan Air, Inc., Bombardier DHC-8-400, crashed into a residential area in Clarence Center, NY. The NTSB said the probable cause was, “…the flight crew’s mismanagement of the airplane’s descent during the visual approach, the pilot flying’s unintended deactivation of automatic airspeed control, the flight crew’s inadequate monitoring of airspeed…”

On July 6, 2013, an Asiana Airlines Boeing 777-200ER, crashed on approach to Runway 28L at San Francisco, CA. Among the probable causes was: “…the pilot monitoring/instructor pilot’s inadequate supervision of the pilot flying…” We might add, “failure to monitor the airspeed.”

In all of these accidents, people died and aircraft were destroyed because the flight crew simply did not pay attention to what the airplane was doing. They failed to monitor the status of the aircraft.

On one level, none of this applies to the typical general aviation aircraft operated under IFR. There’s only one pilot, so the pilot-in-command (PIC) acts as both the PF and the PM.

“Monitoring” oneself seems like a bit of a schizophrenic impossibility, until you reflect on the nature of monitoring.

The monitoring concept is more interesting and useful if we think about the autopilot as the PF. If the autopilot is engaged shortly after takeoff, the pilot should actively watch for changes in the airspeed, vertical speed, navigation system, and altitude to make sure that the airplane is doing what the pilot wants it to do. During cruise flight with the autopilot engaged, the PM should actively monitor the vertical and lateral flight path of the aircraft.

Active monitoring is not easy or intuitive. It requires discipline. It is more than simply looking at the aircraft performance once and then, once satisfied, getting on with other cockpit duties. Active monitoring is a mindset to maintain throughout the flight.

Another way to think about this is treating the autopilot as if it were a student pilot to whom you have assigned a task. You tell the “student” to hold altitude and fly a certain track. Then you watch the student pilot to make sure he or she performs the task correctly, while still performing your other tasks, such as navigation and communication.

Another example could be flying an ILS. You have the student fly it, watching and making sure he or she stays on the localizer and glideslope. If anything isn’t working out, you step in with a small correction and resume monitoring, or take over completely as necessary.

Carrying the analogy further, you could monitor the autopilot/student flying the approach all the way to DA, at which point you say “I’ve got it,” and take over for the landing. The point is that the instructor is never completely off the hook for monitoring until the aircraft is tied down on the ramp.

The sterile cockpit requires that pilot and passengers refrain from any activities not associated with flying the aircraft during critical phases of flight. These include taxi out, takeoff, departure, arrival, approach, landing and taxi in. No shooting the breeze or any discussion of non-flight related subjects.

The PF and PM roles can work with two GA pilots sharing front seats as well. Even if the PM has no specific duties, such as radio communication or navigation duties, that pilot can actively monitor the status of the aircraft and flight progress.

Rather than make a corrective action, this PM’s role is to alert the PF to a condition by stating a fact. “You appear to be 200 feet above assigned altitude,” or “You haven’t yet reported procedure turn inbound,” are examples.

Applying concepts like sterile cockpit and PF/PM roles to general aviation may seem like we’re operating the cockpit as if was a 747 with 300 passengers. Yet, in the end, that is what we really want: keeping ourselves and our passengers safe.

Too often I’ve seen pilots react to their autopilot doing something unexpected by simply pressing the big “AP Disc” button in an Apprentice-style, “You’re fired!”

This is not only unnecessary, it’s potentially deadly if the sudden addition of flying tasks overwhelms the pilot during some critical phase of flight. Critical phases are usually when autopilots do unexpected things: on departures or approaches.

Most often, the problem exists not in the autopilot, but somewhere between the buttons on the panel and the pilot’s seatback. Problems also usually manifest during the highest level of operation, which is navigation or approach mode.

It’s pretty rare for an autopilot to do something unexpected in heading mode. So if your autopilot misbehaves, make the first step downgrading your autopilot use. Switch to heading mode and turn the bug in the direction you want. If the glideslope didn’t capture, switch to a manual vertical speed mode to get going downhill and buy yourself some time without completely disengaging.

You can always completely disconnect if necessary, but you might not need to. You might find the problem—a task made easier with at least limited autopilot use—and get your full automation back. If nothing else, you can use your automation at a reduced level for the rest of the flight.

This takes practice. You must get comfortable flying in reduced automation mode (heading and vertical speed only), as well as a habit of keeping your heading and other bugs synced with your current conditions so you can change modes at any time without a change in flight direction.

It also requires understanding your equipment. For example, a failed HSI may disable the approach mode on your autopilot, but still leave you with GPS steering for lateral guidance and a vertical mode (or just trim) for the glidepath.

There are traps for the unaware here, however. I recently flew an airplane that had GPS steering (GPSS) added to a simple autopilot. It worked like this: put the autopilot in heading mode and then set a second switch to heading or GPSS. If the second switch was set for HDG, the autopilot followed the heading bug; if it was set to GPSS, it ignored the bug and followed the GPS flight plan.

That worked great, until one day I was in heading mode, turned the heading bug 50 degrees left and the airplane turned right. In this case, stepping down one level of automation meant hand flying, so that’s what I did until I found the problem: If you cleared the flight plan from the GPS, but forgot to switch that second toggle from GPSS to HDG, the heading bug worked backwards instead of simply being ignored.

So now if my monitoring mind sees the reverse turn in heading mode again, I don’t need to disconnect; I need to flip the correct switches.

George Shanks has helped many pilots figure out their cockpit roles, including his own.