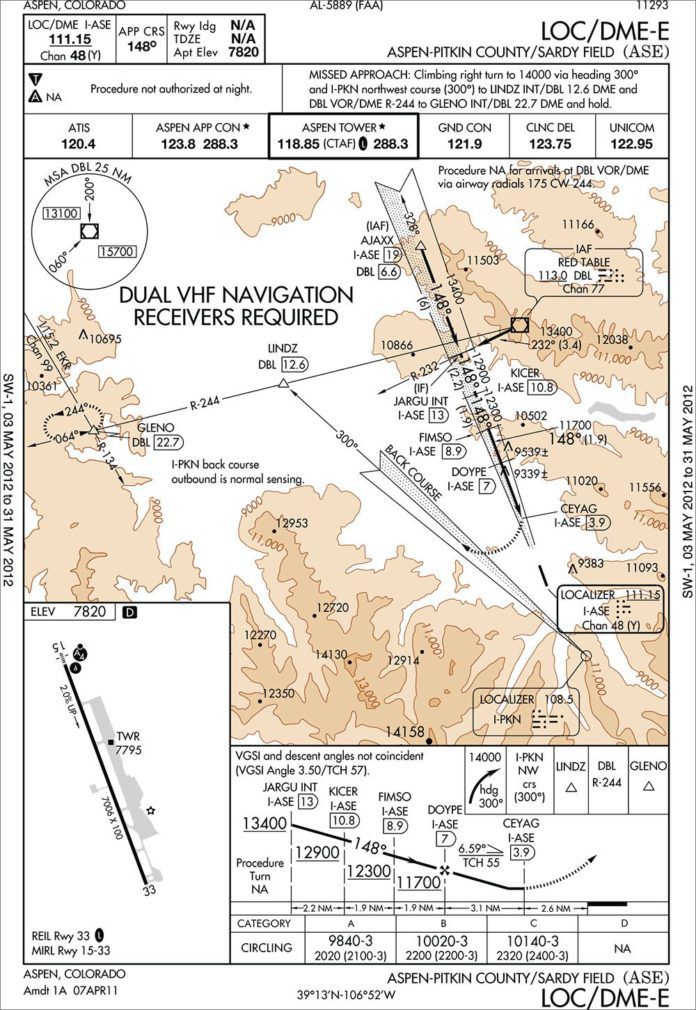 If you remember which side of a localizer is “blue” and which is “yellow,” you’re either a historian or a true pelican. You also have an edge when it comes to certain oddball approaches.

Some approaches achieve a certain celebrity status by nature of their difficulty or mind-bending design. Such is the famous (some say infamous) LOC/DME-E into Aspen, Colo. It leverages two different localizers to give you at least a remote chance of slipping down between the mountains and seeing the runway, or slipping back up between the mountains to tell the tale if you don’t.

The first thing most folks notice about the approach is the use of the second localizer for the missed approach. The reason is simply terrain; Your path up and out on the missed cannot be left or right of course. Well, not for long.

A common question is whether flying outbound on the missed a pilot should expect reverse sensing on the second localizer. The answer is, “No.” You are flying a backcourse, but you’re flying it outbound. It’s functionally identical to flying a normal ILS, going missed and then continuing to follow that localizer straight ahead on the same heading. The only differences here are that it’s two different physical transmitters on two different frequencies with a right turn off one to intercept the other, in a valley, in the clouds, and quite possibly in a G4 if you’re a professional pilot hauling some human celebrities.

You can see that the sensing is normal by looking at the localizer feather shown on the plan view of the chart. Back in the early days of VHF navigation, CDIs were color coded with blue on the right of a centered needle and yellow on the left. The remenants of this only remain in the panels of antique V-tail Bonanzas and approach charts. The darker shading of a localizer on what would be the pilot’s right side when flying inbound is the blue side.

Now look at the localizer for the missed. It is, indeed, a backcourse, set up so the blue is still on the pilot’s right when flying outbound. This begs the question for HSI users: What course do you put in, 300 or its opposite?

You set your HSI for 300, just as if you’d flown an ILS 30 and were now on the missed. Set it for anything else and you may get confused enough to stray off course in a spot were there’s little room for error. GPS users get it easy, but they shouldn’t get complacent. When this approach first appeared on GPS units, the HSI autoslew dialed up 120—the front course. That problem is long gone, but it points out how valuable some old-school savvy can be, even in a new-school world of IFR flying.