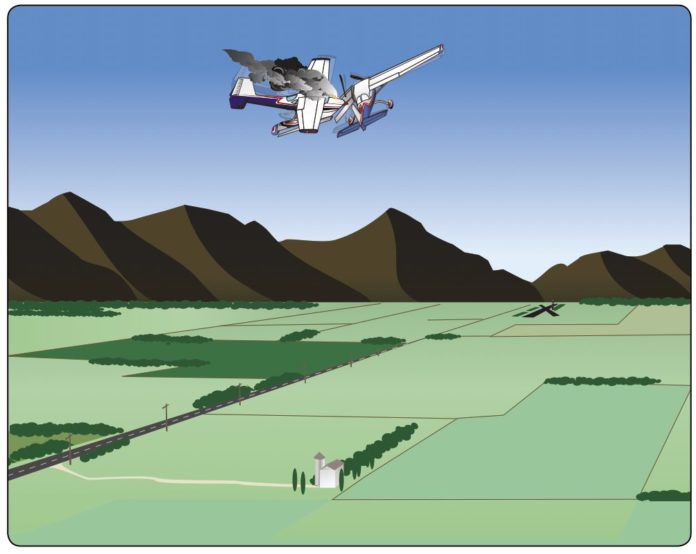 As a post-solo student, I lined up nicely on final. I had it nailed. Suddenly I felt my instructor’s hands on the yoke. I was annoyed because I didn’t need help. He pointed up to the right. Oh. There’s another plane on final, maybe a hundred feet above us. Fixated on the landing, I’d not learned how to scan. My instructor broke off the approach and advised the tower.

I was shaking. John tried to soothe me with the “big sky” theory. Making my worst mistake in aviation, I quit.

Skip forward a year and a half. My written expired in six months. I went back to finish. The examiner complimented me on my systematic traffic scanning. I said nothing about the indelible lesson I learned the hard way.

See and Avoid in Practice

We know we must see and avoid other aircraft. Any traffic scan worth using takes into account your eyes’ limitations. We can see only a narrow portion of the sky and your vision is blurry if you move your head or your eyes too fast.

You must focus on a small piece of airspace for a second or so, repeated across your field of vision. The Pilots’ Handbook of Aeronautical Knowledge (PHAK) recommends 10-degree slices of sky observed for at least one second. Then presumably check the instruments.

An alternate front-to-side scan starts in the center of the windshield, scanning from center to far left. Swing back to center and repeat on the right. Scan the instruments. The order in which you scan is whatever you like if you slice-and-stop.

Scan for traffic in your usual field of vision. Interleave that with systematic scanning of the entire field. Peripheral vision can reveal lots of traffic.

You’ve got to look outside to see potential threats. Keep that scan going; fixating in one place causes our eyes to relax into a focus about 20 feet away, called empty field myopia.

We can supplement our visual traffic spotting with various electronic means. The first is to form a mental picture of traffic from the radio. Pay particular attention on the radio and visually when near intersecting airways, VORs, and GPS waypoints—all of which are traffic magnets. Of course, there are other electronic means of spotting traffic.

Although there is no current mandate for ADS-B In, pairing it with ADS-B Out in the U.S. provides longer-range traffic advisories more rapidly and with greater accuracy than earlier traffic advisory technologies such as TIS (not TIS-B, ADS-B traffic) or even radar advisories.

U.S. airborne ADS-B In uses either a 978 MHz Universal Access Transceiver or a 1090ES transponder. The ES or “extended squitter” feature extends the standard messages by adding ADS−B data. This additional information is called “extended squitter.” Just think of it as an ADS-B Out transponder.

UAT is usable only in the U.S. and meets the requirements below 18,000 feet MSL. An ADS-B transponder (1090ES) can be used at any altitude. TIS-B coverage extends to FL240 but will show targets at up to FL278 because the provided coverage extends above a TIS-B aircraft by 3800 feet.

UATs and 1090ES transponders also communicate with about 700 ground stations in the U.S. The first task of TIS-B is to rebroadcast UAT traffic information to 1090ES aircraft and vice-versa, but ADS-Rebroadcast (ADS-R) shows only ADS-B equipped aircraft. To give a fuller picture, TIS-B injects additional non- ADS-B traffic from ATC radars as the diagram on the next page shows. Ultimately, traffic (via TIS-B, ADS-R, and ADS-B) shows up in your cockpit.

Aircraft communicate traffic air-to-air if the links are both 1090ES or UAT. If not, ADS-R translates them.

To be visible in this traffic-reporting-and-relaying scheme, you’ve got to have ADS-B Out or at least a transponder and be in range of a ground station. The end-to-end delay from sensor measurement to the TIS-B transmission is under 3.25 seconds. Even a jet moving nearly 500 knots will be no more than 0.14 NM out of place before it’s displayed.

ADS-B data is updated every second, compared to five or twelve-second sweeps of radar. Even so, you might receive an intermittent target “shadow” of yourself, usually while maneuvering. Shadows appear and disappear quickly and right at your altitude. Occasionally the ground system fails to correlate radar with ADS-B targets, which also produces a shadow of nearby aircraft.

The traffic coverage area around an ADS-B aircraft is centered within a plus-and-minus 3800 foot cylinder seven NM in radius. ADS-B traffic information updates more quickly than radar, so it’ll be more accurate.

Many of us use small portable ADS-B receivers. However, a participating aircraft must trigger TIS-B. If no such aircraft is near you, you might not see any threats although they could be present.

All traffic shown is to help you visually spot traffic. Only then can you maneuver safely if necessary.

TCAS II is the only version of collision avoidance hardware that offers not just traffic but resolution advisories to climb or descend to avoid an imminent threat. It issues visual and aural Resolution Advisories (RAs) to the pilot, relative to imminent threat aircraft to command vertical avoidance maneuvers, such as, “Climb!”, “Increase climb” or “Don’t descend.” No collision avoidance system can command a turn.

A TCAS-equipped aircraft sends out a blind active interrogation signal and analyzes the responses for range, bearing, and altitude. TCAS recognizes all operating transponders including basic Mode A units that will trigger a TA in a TCAS aircraft. Only non-transponder aircraft are invisible to TCAS.

TCAS II is the most comprehensive form of TCAS, but its range depends on what it is asked to do. Overall pulse detection range is 30 NM for Mode S transponders and 14 NM for Mode A/C units. Surveillance must be reliable within 14 NM, but TCAS II will only assess threats within 12 NM as possible RAs. TCAS II guarantees system reliability within at least 4.5 NM. Two TCAS II systems can coordinate RAs to maximize vertical separation, typically 300-700 feet. There is even a reverse RA if one aircraft fails to respond correctly in the latest version 7.1 software.

Unlike older TIS or ADS-B TIS-B that rely on ground stations and air-to-air responses, TCAS exchanges are solely air-to-air. TCAS is usable worldwide.

TCAS II systems are heavy and expensive, typically costing more than $150,000. One example is the Garmin 8000 TCAS II.

RAs are not unusual when GA aircraft maneuver near the edges of Class B, C or D airspace. We can help larger aircraft avoid RAs by staying an additional five miles or so away from the margins. Most RAs occur at lower altitudes in Class E airspace and involve GA or VFR intruders. Whenever we meet with local Class C controllers, they plead for us to keep our distance.

If you hear a pilot say “TCAS RA” on the radio, look around; it could be avoiding you. Do not change your flight path without reason. Check both visually and electronically to see if there is an aircraft near you. Obtaining advisories is also a good idea.

Under NTSB 830.5 (10), pilots must report an RA when IFR and compliance is necessary to avert a collision. In 2016 the NTSB removed the requirement to report RAs in the flight levels.

In 2002 a passenger jet and a cargo Boeing 757 collided north of berlingen, Germany. Subsequent analysis showed that the cargo crew responded correctly to their TCAS RA. However, the passenger jet crew obeyed a controller’s mistaken instruction and maneuvered against their RA. The collision cost 71 lives, including 45 children.

The ICAO subsequently clarified their rules that in such a conflict, the crews should obey the RA, not the controller. Why? If TCAS is triggered, something else has already failed. TCAS is a last-resort defense.

TCAS is the fastest universal conflict resolution technology available. TCAS I can generate a traffic advisory 48 seconds before the closest point of approach. A TCAS II RA can respond in 35 seconds. With its twice-per-second updates, TCAS is much closer to real-time information about a conflicting aircraft’s path and position than the controller’s radar sweep.

TCAS I, less expensive than TCAS II and designed concurrently, is required in commuter aircraft with 10-30 seats such as turboprop and light jet aircraft. The system monitors nearby traffic and presents approximate bearing and altitude in real-time of other aircraft but like TIS-B or TAS, does not suggest avoidance measures to avoid collision threats.

TCAS is too expensive for smaller GA, and there is no legal requirement to have it, even in Class A or RVSM airspace.

Having no horizontal separation puts the squeeze on aircraft near their service ceiling or near the ground. TCAS is disabled at altitudes below 1000 feet AGL. It does not account for obstacles such as antennas.

TCAS fails to account for aircraft performance or current configuration during RA creation. Hence RAs may call for action outside the safe flight envelope and may not be optimal for the aircraft type.

Although TCAS is mainly range-based, sometimes a time-based representation is more helpful. TCAS extrapolates to predict future flight paths based on history. It knows nothing of actual routing per a flight plan or ATC instructions.

Traffic Advisory Systems (TAS) are less expensive than TCAS I and designed for propeller-driven GA aircraft. A TAS must still meet the performance guidelines in the TCAS standard, TSO-C147 and detect intruder aircraft based on TAS design criteria.

As with TCAS I, TAS actively interrogates nearby aircraft and provides Traffic Advisories (TA) should an intruder come within 30 seconds of an imminent collision. The two most popular TAS systems for general aviation are Avidyne’s SkyTrax600 series with prices ranging from $10-20,000 and Garmin’s GTS800/820/825 TAS units starting around $10,500. Costs exclude antenna(s) and installation.

TCAS II is likely the end of the line for collision avoidance technology. TCAS III would have added horizontal maneuvers to assist aircraft near the ground or at their service ceilings. TCAS III proved insufficiently accurate using then-available technology. TCAS IV would have used GPS to provide reliable position. That set it up on a no-win collision course with ADS-B’s TIS-B, and that effort too has been dropped. That’s how tech is—one leapfrogs another. But see-and-avoid is eternal, and remains our first, best line of defense.

Fred Simonds, CFII has an egg timer in his head that forces him to look outside every 4-5 seconds because South Florida has lots of traffic.