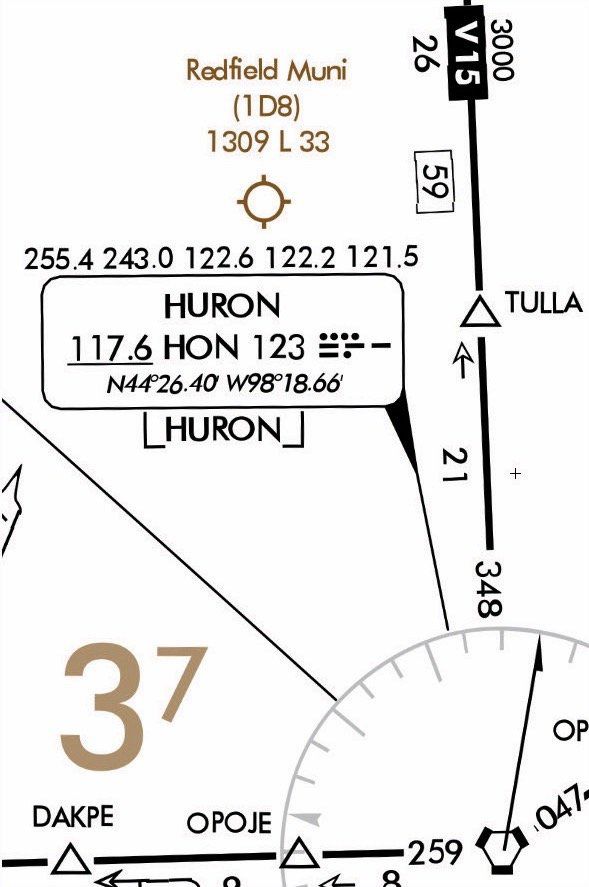 A family outing brought you to Redfield, SD (1D8), a Class G airport with no approaches. Your departure ceiling is approximately 900 feet. You filed an IFR flight plan, using TULLA as your initial waypoint to pick up an airway. You contact Minneapolis Center to ask for your clearance. You hear, “are you able to provide your own terrain and obstruction clearance between your present altitude and 3000 feet?”

With no procedure and controlled airspace beginning at 1200 feet AGL, can you legally say, “Yes”?

The ATC Handbook, FAA Order 7110.65, Paragraph 4-2-8 directs controllers to ask this of VFR aircraft seeking an IFR clearance in the air until they reach the minimum IFR altitude (MIA), typically, ATC’s minimum vectoring altitude or the published MEA. “If the pilot is able to maintain terrain and obstruction separation,” the Handbook states, “issue the appropriate clearance… If unable to maintain terrain and obstruction separation, instruct the pilot to maintain VFR and to state intentions.”

The context is airborne VFR flights requesting a clearance in the air, but some pilots have been asked when requesting a clearance on the ground. Regardless, the problem situation arises whenever we depart from an airport without instrument approaches. Until the pilot is following an approved FAA procedure, reaches the stated altitude, or receives a vector from ATC, the pilot is solely responsible for terrain and obstacle separation.

Note that ATC is not asking if we can maintain visual separation, only whether we can avoid them. We regularly enter the clouds with obstructions in the area. Airports with instrument approaches have been evaluated for departure obstacle and terrain clearance. Many airports have “diverse departure areas.” In general, we just have to cross the departure end of the runway at least 35 feet AGL, climb to at least 400 AGL before turning, and climb at least 200 feet per nautical mile to the MIA. If more is needed, the airport or runway will receive some combination of alternate takeoff minimums, enhanced climb or visibility requirements, Obstacle Departure Procedures (ODP), or other restrictions and information. But that assessment is not made for an airport with no instrument approaches like Redfield. If you answer “yes” to ATC’s query and enter the clouds below the stated altitude, the only one guaranteeing you won’t hit anything is…you.

Do the regs allow us to say “yes” if there is no approved departure procedure? Many of the relevant rules on arrivals and departures are contained in 91.175, Takeoff and Landing under IFR and have been drilled into us since our instrument student days. For example, 91.175(a) tells us to follow an instrument approach procedure when descending to an airport through the clouds. And 91.175(c) prohibits us from going below MDA/DA unless we have both the required flight visibility and certain elements of the runway environment in sight. Plus, although the regulation says when we may not use a procedure turn, the requirement to fly a published course reversal unless we are vectored to final, cleared straight in or on a “No PT” route is an offshoot of 91.175(j).

Most arrival rules are mandatory, but departure regulations make significant distinctions between Part 91 aircraft and those operating under Parts 121, 125, 129, and 135 that are required by 91.175(f) to comply with takeoff minimums and use published ODPs unless ATC assigns an alternative procedure. Part 91 flights are, on the other hand, permitted the dubious luxury of the zero-zero takeoff and may disregard the ODP unless it is assigned in our clearance.

We should note that using an ODP is also our prerogative. We are entitled to use one, even if it is not part of our clearance, unless ATC assigns another procedure. To add to the picture, 91.177, Minimum Altitudes for IFR Operations, exempts takeoffs and landings from the requirement to operate at or above the MIA.

The overall thrust of this regulatory backdrop is that takeoff minimums and obstacle departure procedures are there for our benefit (and health) but are not mandatory for Part 91. We may more or less do what we want, so long as we do not violate our IFR clearance or ATC instructions. We can answer “yes” above without violating a specific IFR regulation.

“Legal” Does Not Mean “Safe”

In April 2015, the FAA Chief Counsel’s office responded to an inquiry from Dave Weiman, president of Flyer Publications, positing the scenario being discussed here —a departure from an airport with no instrument approach and a terrain and obstruction query from ATC. Weiman asked whether it was “safe and legal for a pilot to accept responsibility for obstacle clearance when he cannot see obstacles on the ground but could ‘likely avoid’ obstacles due to his knowledge of the area or his charts…” The response is telling. No reference to any regulation prohibiting the practice appears. Instead, pointing to the 91.13 catch-all, the letter warns it “may” be deemed careless and reckless to answer “yes” to ATC based only on the “likely” ability to avoid obstacles.

Legal-but-reckless is not unusual in the regs. Although typically tied to the violation of another rule, violation of 91.13’s prohibition on careless or reckless operation can stand alone. This principle has been applied in various situations.

In the 1986 Vance and the 1993 Murphy cases, the NTSB dismissed violations of VFR cloud clearance rules, accepting that it was “not illegal for an instrument rated pilot in a properly equipped instrument airplane to take off and fly in instrument conditions without a clearance” in uncontrolled airspace. At the same time it upheld the remaining 91.13 careless and reckless violations because of the “unacceptable hazard” created by a pilot who planned to continue into controlled airspace in visual conditions above the clouds.

The fuzzy bottom line is, not only is legal not necessarily safe, but doing something legal in the wrong circumstances can still subject us to the FAA enforcement process. People also have widely different risk tolerances. We can’t give a definitive “yes we can” or “no we can’t” answer, but we can examine the scenario in the light of our tools and knowledge to see where “yes” might be an acceptable risk in certain circumstances.

These days we have many tools—human, paper, and plastic. We might know an area well enough to be confident about the location of obstructions. On arrival in visual conditions, we might make an IFR departure assessment. We might know that circling above the airport within a reasonable radius or within the confines of the traffic pattern will keep us out of trouble, or that departing in a certain direction will take us away from rising terrain. Modern GPS is an assist because it increases our ability to safely remain in a defined area if we create our own “climb in a hold” above the airport. Our en-route course might take us into hilly terrain, but we can plan to first fly “downhill” in the opposite direction to gain altitude, informing ATC of our plan.

Looking at Redfield on the sectional, we see a tower two miles northeast. At 250 feet AGL, it will be visible until we’re comfortably above it, as will another tower about four miles to the north. No other obstructions are depicted between the airport and our first waypoint and we didn’t see anything else on the way in.

Our do-it-yourself departure looks safe. But we must keep in mind that good risk management means understanding the limitations of our tools. Terrain doesn’t move much, but obstructions come and go. The official obstruction database has structures over 200 feet AGL, and even lower in the vicinity of airports with approach procedures. Even then, the database depends on timely reporting of new obstructions. Fortunately, our ceiling is high enough that this shouldn’t be a factor. Change the ceiling or anything else and the whole analysis changes.

As mentioned, we want to let ATC know what we’re planning, whether we’re using an unassigned ODP or creating our own. We don’t want to be cleared in one direction and enter the clouds in controlled airspace in another.

Ultimately, this is about personal risk tolerance. If we roll our own, we’d better be right, with a regulation bust being our least concern if we’re wrong.

Mark Kolber has deployed this analysis and reasoning many times, and he hasn’t yet busted anything—reg or airplane.