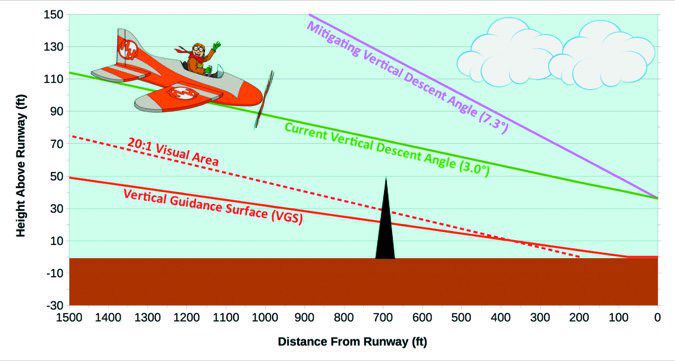 Given a choice, chances are a pilot will pick a vertically guided approach over a non-precision approach. They’re easier to fly and the minimums are almost always lower. From a design perspective they also afford stricter obstacle clearance assurances. What’s not to love? That’s probably what the thought process was like that nearly led to a significant portion of non-precision approaches being cancelled or severely restricted in late 2017.

They’re technically still on the chopping block; although due to the significance of the impact they were granted an indefinite stay of execution until further study can be conducted. The motivation for this change is the FAA’s stated near-term priority to define flight-procedure criteria to increase the number of runways qualifying for vertically guided approaches—clearly a worthwhile goal. However, to jeopardize many non-precision approaches at the same time seems potentially misguided.

The less restrictive criteria applied to non-precision approaches often enable approaches into airports that wouldn’t otherwise qualify for a vertically guided approach. While this requires higher minimums and puts more responsibility on the pilot, it still allows the increased utility provided by instrument approach procedures at many airports. If those procedures were to be cancelled or restricted into uselessness, airports and their communities would bear the burden—often with no recourse. Let’s dig deeper into these criteria changes, and the tradeoffs that are involved.

At the heart of the matter is the difference between a non-precision approach with a published minimum descent altitude (MDA) and a vertically guided approach with a published decision altitude (DA). To the pilot, both are the lowest that you can go on an approach, with the only apparent difference being that the DA is the one that’s at the end of a glidepath. However, the differences are far more significant than that.

Historically, approaches with a DA have offered protection between the DA and the runway through a Glidepath Qualification Surface (GQS). Because obstacle protection continues beyond the DA, pilots are allowed to continue descent until reaching the DA, and then if a missed approach is necessary, drift below the DA in the process of configuring to climb. Aptly named, the DA is the altitude that a decision to continue the approach is made, rather than a minimum altitude below which obstacle clearance is not assured, as is the case with an MDA.

The differences get murkier with a navigator showing advisory vertical guidance on non-precision approaches. Advisory vertical guidance was added to facilitate Continuous Descent Final Approaches (CDFA) on non-precision approaches, avoiding the “dive-‘n-drive” technique. These use the published Vertical Descent Angle (VDA) to provide acomputedglidepath from the FAF to the runway. Modern navigators have this LNAV+V mode on most RNAV (GPS) approaches with LNAV minima.

The intent of the advisory glidepath was to improve safety by reducing the need for configuration changes at low altitudes, but it introduced new human-factors issues that needed to be considered. Although the depiction of the advisory glidepath on navigators is usually different from an actual glidepath indication, pilots are not always aware of the differences and upon seeing an indication similar to a glidepath, tend to treat it like any other glidepath. This, despite AIM 5-4-5(k) stating, “A VDA does not guarantee obstacle protection below the MDA in the visual segment.” In other words, be careful below MDA.

Although the required obstacle clearance is not assured after an aircraft descends below the MDA, there is some obstacle screening that is done through the application of the visual area from just short of the runway threshold to where the VDA intersects the MDA (this is where the visual descent point, or VDP, is located when one is published). The purpose of the screening is to identify obstacles that a pilot would encounter when descending visually from the MDA to the runway.

Penetrations of the visual area surfaces are permitted since the pilot is expected to visually see and avoid them, and they only result in restrictions on the approach (visibility, loss of night minimums, etc.). The impact of visual area penetrations took on added significance after airlines began emphasizing CDFA approaches and crews were sometimes caught unaware by obstacles below the MDA. This is how we got to the FAA’s increased emphasis on expanding the number of actual vertically guided approaches.

The problem is that there are a large number of approaches that have penetrations of the 20:1 visual area surface, and that number is growing. With higher precision airport surveys, more and more obstacles (for instance, trees that have grown) are being identified that penetrate the visual area surfaces to runways, and these must be either mitigated or the approach penalized. Although having no penetrations would be ideal from a procedural standpoint, having a more complete picture of the obstacle environment below the MDA is certainly a good thing for pilots.

There are a couple of cues that pilots can look for to determine if the 20:1 visual area surface is clear or if there is an obstacle that penetrates it. If there is a note that “Procedure NA at night” then unlit 20:1 penetrations exist. However, in cases where flight inspection determines a pilot descending on the vertical descent angle (VDA) would need to destabilize the aircraft to avoid a 20:1 penetration (this is bad), the VDA is not published and a note that “Descent Angle NA” (original) or “Visual Segment – Obstacles” (revised notation) is added in its place.

These mitigation strategies still allowed penetrations to exist between the MDA and the runway, and just penalized the approach in ways designed to avoid the most likely scenarios for problems to occur. For example, a pilot can’t see an unlit 20:1 penetration at night, so it makes sense to restrict night landings. However, FAA management wanted a more decisive solution, so they considered what you might call the nuclear option.

The March 2016 update of the TERPS manual (FAA Order 8260.3C, which defines criteria for flight procedures) introduced a new surface called the Vertical Guidance Surface (VGS). The VGS is equivalent to the GQS (Glidepath Qualification Surface) that has historically provided protection on vertically guided approaches between the DA and the runway (discussed above), except the VGA now applied equally to both vertically guided and non-precision approaches.

This seemingly minor change was scheduled to take effect on October 1, 2017 and would have resulted in many non-precision approaches being cancelled or severely restricted due to the requirement that the VGS be clear of obstacles.

The FAA found that would work for approximately 540 runway ends, but in many other cases the requirement that the VGS be clear of obstacles would require a very steep vertical descent angle. There are human-factors issues at play with abnormally steep descent angles, and TERPS has restrictions on how high a descent angle can be for each category of aircraft (see the Maximum Angles table to the bottom left).

Clearing a VGS penetration by raising the descent angle could make the approach unusable by many or all aircraft. Another possible mitigation option is to offset the final segment, which has its own potential for human-factors issues and procedure restrictions.

Consider the RNAV (GPS) RWY 13 approach into Blackwell Field (71J) in Ozark, Alabama. A survey picked up several poles a few hundred feet before the runway that were penetrating its 20:1 visual area. Those poles were unlighted, resulting in the note “Night landing: Rwy 13 NA.” However, were the VGS to be applied to this procedure, those poles would penetrate by over 30 feet and require up to a 7.3-degree VDA to clear. Since the steepest VDA allowed by TERPS for Category A aircraft is 6.4 degrees, this procedure would require a waiver to be usable by any aircraft, including low-speed single-engine piston trainers.

Not surprisingly, due to these impacts, the requirement to apply the VGS to non-precision approaches was not well received by stakeholders. Shortly before the date the change would have taken effect, the FAA issued a policy memo stating that application of the VGS on non-precision approaches would be delayed indefinitely to allow them to validate the extent of the impact on existing approaches and determine whether the change is appropriate. That’s about as close as it gets to high drama in the flight procedure world. It’s also reassuring that the criteria change process, convoluted as it may be, actually works and stakeholder input is considered.

Enabling existing approaches to qualify for vertically guided minimums with a clear VGS and more relaxed descent angle limitations is certainly a worthy goal and a net gain for pilots and airports. However, this shouldn’t require approaches that are unable to conform to be needlessly restricted, and by extension penalize the airports and communities that they serve.

At its core, this is a training and risk-management issue. Pilots need to fully understand the meaning of indications on their navigators and must correlate them to IFR requirements. In addition, it is true that there is less protection afforded on a non-precision approach than a vertically guided approach. However, the same can be said for circling approaches, which are fundamentally riskier than straight-in approaches, but remain available to pilots due to their utility. It is up to the individual operator to weigh the benefits and risks of flying a non-precision approach and decide whether to conduct the operation.