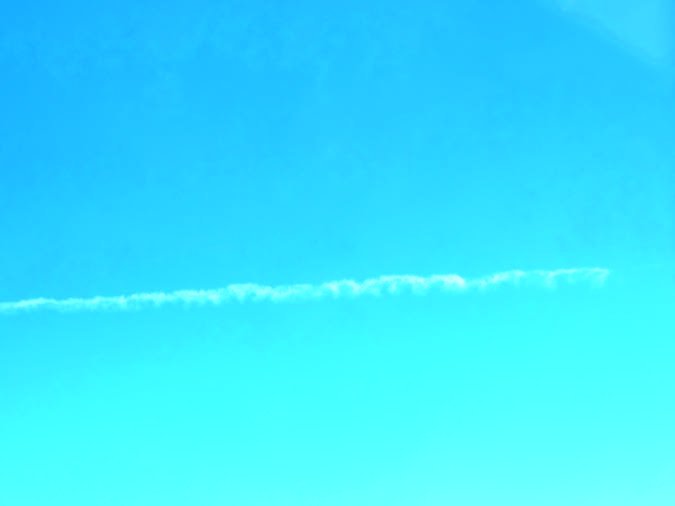 Did you know that even piston airplanes can occasionally leave a contrail? Sure, it’s unusual, but it can happen. Many of us often wonder why some airplanes leave contrails that can last seemingly forever, while others leave a contrail that doesn’t last but a few seconds. Plus, of course, sometimes there’s no contrail at all.

Contrails are an interesting phenomenon. So, let’s have some fun examining the science behind contrails. Along the way we can use that as a basis to learn a bit more about how the atmosphere behaves.

Contrails, a concatenation of the phrase “condensation trails”, were unknown until aircraft began reaching into higher and colder layers of the atmosphere during the 1910s. In the summer of 1919, Franz-Zeno Diemer, a 30-year old test pilot in the Bavarian Flying Corps, was intent on setting a series of altitude records. He eventually reached an altitude of 32,020 feet in a DFW F 37/III powered by an aluminum BMW engine. The flights were in breach of Germany’s WWI armistice, so the altitude record was not recognized.

Diemer’s aircraft, like many of the era, was an open-cockpit design, and at the highest altitudes he faced temperatures below -40 degrees C. That’s where Diemer observed his own contrail. He wasn’t sure what caused the phenomena, but he documented it in his record of the flight, providing one of the earliest accounts from nearly a century ago.

Contrails were largely ignored in the decades following. Little mention was made in the literature until WWII, when military planes began routinely flying above 20,000 feet. These contrails were known as vapor trails and were of tremendous concern. They revealed the plane’s location and allowed the enemy to more quickly locate their targets. Fighter aircraft during WWII were able to exploit contrails and use them to maneuver right up to bomber aircraft and attack them without being spotted.

Although pilots were accustomed to seeing vapor trails in the 1920s and 1930s, they were not well understood. The theories that were floated about the causes of contrails included combustion dust and soot, propeller turbulence, cumuliform-convection from the heat of the engines, electrical effects, and condensation over the airfoils.

World War II and the tactical importance of contrails finally caused the Axis and Allies to start taking a serious look at them. German scientists enlisted Luftwaffe fighters to take measurements, while in England a B-17 Flying Fortress was tasked for the job. The first research paper on contrails was published in 1941 by Ernst Schmidt of the German Academy of Transportation.

Allied technicians gradually worked rules of thumb for predicting contrails during World War II, with the biggest advances coming in the early 1950s by the Air Weather Service and the efforts of Herbert Appleman. Appleman developed a sophisticated technique for forecasting contrails that was published in 1953, and his methods continue to be used today with very little modification.

Once leaving the engine, the exhaust cools dramatically, mixing with the frigid environment. The warm plume allows for all that water to exist as water vapor for about 100 feet behind the aircraft. However frigid air is mixed in, and this cold air has very little capacity to hold gaseous water vapor, orders of magnitude less than that on a warm summer day at sea level. The water vapor is forced to condense as a vast mass of microscopic liquid water droplets.

In a very cold environment, all of these water droplets freeze into ice crystals in a matter of seconds, and this forms the contrail streaming behind the airplane. What happens then depends on the humidity of the air mass. If the air mass is humid, as is common in the tropics, the contrail will persist for minutes to hours.

During this time it might gradually dissipate, or remain as a dense, fibrous cloud mass. But if the air mass is dry, the ice crystals will evaporate, converting back into gaseous water vapor. This causes the contrail to vanish quickly.

If the air mass is warmer, perhaps around -30 to -40 degrees C, the mass of liquid droplets immediately behind the plane might not freeze. This might sound strange considering the TV dinners and ice cubes in your freezer are rock solid at -15 degrees C. But small water droplets frequently exist in the atmosphere in what we call a “supercooled” state and if not disturbed will remain liquid. This is what produces the thick, opaque altocumulus and altostratus clouds at 10 to 15,000 feet where temperatures average 0 to -10 degrees F. It’s only when the temperature goes below about -40 degrees F that these supercooled droplets rapidly start freezing.

The optimum altitude for contrails is at the tropopause height (See “The Weather Aloft” from May 2017 that touched on the tropopause.) where we find the coldest temperatures. Below this level is the warmer troposphere, while above is the stratosphere, warmed by ozone. In the conterminous United States, the average wintertime tropopause height ranges from 33,000 feet along the U.S.-Canada border to 43,000 feet in Texas and Florida (43,000 and 52,000 feet in summer, respectively). File these altitudes to keep the chemtrail fanatics busy!

Contrails normally take on a boring, rippled appearance. But you might see unusual shapes and formation, such as ripples, rings, and waves. These effects are caused by strong wind shear, adiabatic warming and other processes.

Believe it or not, contrails can be seen from space. Larger contrails in humid air masses were frequently observed by the GOES weather satellites as early as the 1970s. With the appearance of the Terra and Aqua polar orbiter satellites (0.25 km resolution) and GOES-16 and its fellow next-generation satellites (0.5 km), forecasters are beginning to see them quite frequently in satellite images.

Contrails also offer some clues that help forecast the weather. A contrail that disappears very quickly typically means there’s dry air at that level. But if the contrails are very persistent, that means the layer is humid. This could be a sign that the middle and upper troposphere are destabilizing due to an approaching disturbance. Rain might be in the forecast.

If a high-flying aircraft doesn’t produce a contrail, it could be a sign that the plane is extremely high. Appleman’s diagram shows that the higher we go, the colder it must be before a contrail can form. At 75,000 feet it must be -62 to -70 degrees C or colder to get a contrail. A typical 75,000-foot temperature along the eastern Russian coastline in winter is -55 degrees C. It’s easy to see that the SR-71 and A-12 Blackbirds often operated without being seen.

One of the most important lessons that contrails show us is the lack of homogeneity of the atmosphere. Sometimes contrails have a very uniform, unbroken appearance, but other times we see them take on a highly segmented look. For example, a contrail might have a dense appearance for a couple of miles and disappear, then later reappear even thicker. This appearance reveals the discontinuities in the humidity field. In this case the contrail disappears in a localized (microscale) area of drier air, and where the contrail appears again, we have an area with higher relative humidity.

This is important because when radiosonde balloons are launched, we frequently assume that the readings are valid for all of that region. But there are only 70 radiosonde sites in the conterminous United States, which means each launch is assumed to represent conditions for half of a state. The irregular nature of contrails, however, shows that there is lots of “noise” and variability of the weather fields at the smallest scales.

As a forecaster, this is one of the most sobering things that I see when I look at a contrail: there’s no way we will ever be able to sample the irregularity of weather fields at such small scales, which means forecast models will always have some degree of error. A perfect weather forecast is not coming in our lifetimes, and I’m not even sure this problem will be solved by the time Captain Kirk’s Starfleet class graduates.

Contrails have been the subject of research since the 1970s to determine what their impact is on weather forecasts. The shutdown of air traffic after the events of 9/11 in 2001 provided a unique look at the impact of contrails, and weather centers have already begun investigating how to parameterize contrail information into dynamic models, using satellite data, flight plans, and other information.

Like any clouds, contrails have high albedo, that is, they reflect incoming short-wave solar energy back out into space. They also prevent outgoing long-wave radiation from leaving Earth. But research into contrails has shown that they are a little more effective than natural clouds at trapping long-wave radiation and not as effective at reflecting energy into space. So they are considered to add to the greenhouse effect, warming the atmosphere.

Some researchers are already exploring solutions. In 2013 and 2014 NASA partnered with agencies in Canada and Germany, flying a DC-8 powered by a 50-50 blend of JP-8 and a biofuel made from camelina plant oil. The thinner contrail produced by this aircraft was studied extensively by aircraft assigned to the project and may prove useful for aircraft design in the future.

Contrails are a major problem for the military, completely negating the billions of dollars poured into stealth and low observability technology. For decades, the U.S. military and defense contractors explored chemical solutions. One proposal suggested injecting chlorosulfonic acid, a highly corrosive and toxic substance, into the engine exhaust. Another technique mixes carbon black into the exhaust to “cover up” the contrail. None of these systems have been actually used.

The US military avoids problems with contrails simply by making sure that the aircraft don’t have unexpected surprises. The weather models used by the military contain algorithms that specifically look for contrail formation. These are integrated into flight plans. The B-2 stealth bomber uses an unusual LIDAR (light detection and ranging) device manufactured by Ophir Corporation to monitor the wake of the airplane. If the system is armed and the plane begins producing a contrail, the crew is alerted and can then take pre-planned corrective action such as a flight level change.

We can’t go much further without getting into the subject of chemtrails, a conspiracy theory in which supposedly contrails are the manifestation of government aircraft spraying chemicals to sicken people or get their compliance. The idea of chemtrails was jump-started by a speculative 1996 U.S. Air Force weather planning paper which singled out weather as a force multiplier, but whose contents were taken a bit too literally. This was also a time when the TV show “X-Files” was a sensation and Art Bell’s radio show was gaining enormous popularity.

Skeptics found plenty of interesting evidence on the web— arguably cherry-picked—to strengthen their claims. The ballast barrels on Airbus and Boeing flight test aircraft, for example, gives the impression of a massive spraying operation. And the Internet itself gave skeptics a forum to talk freely about HAARP, Illuminati, Bilderberg, and so on. We won’t go much further into the debate about chemtrails, but plenty of additional history on that topic is available on the Internet.

Now hopefully you know everything that you need to know about contrails. Admittedly it won’t help much when it comes to safety. On the other hand, we see plenty of these things at cruise altitude, and they have a few things to tell us about conditions in the upper troposphere. And there’s no such thing as too much aviation information.

Stay safe up there!

Tim Vasquez is a professional meteorologist in Palestine, Texas. See his web page and his various materials at www.weathergraphics.com.