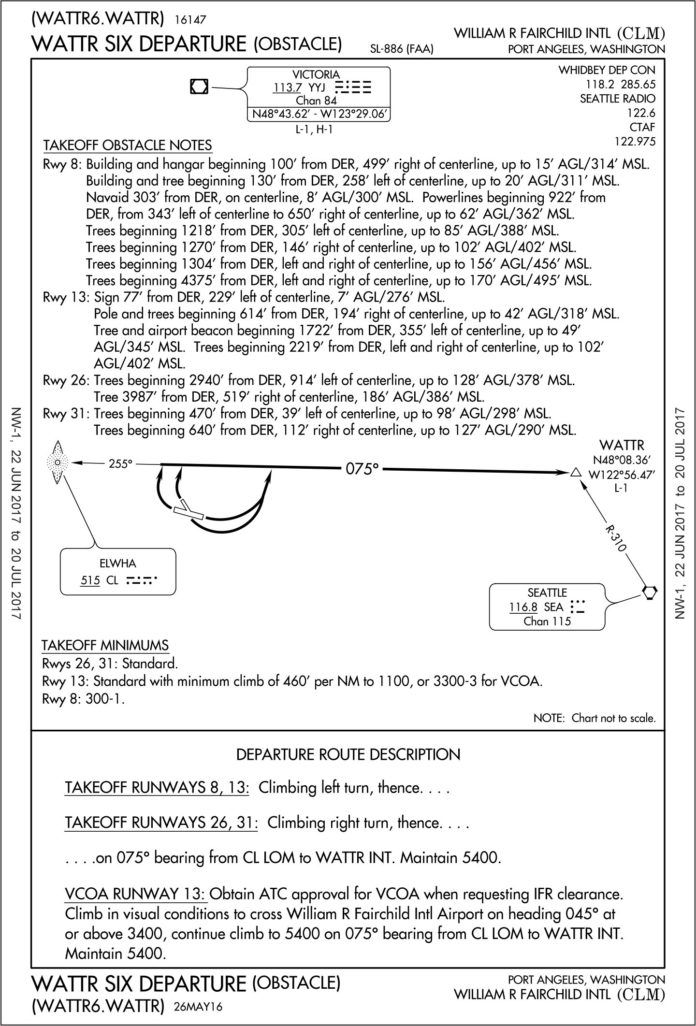 My guardian angel has a perverse sense of humor. I can’t count the number of times I’ve done the wrong thing for the right reasons and had it turn out better than if I had seen it clearly from the start.

That angel would be chuckling, through, watching me puzzle out an IMC departure from Fairchild International in Port Angeles, WA (KCLM). It looks simple on the surface: Fly the WATTR SIX. This is a charted departure procedure for obstacles. Pilots east of the mighty Mississippi rarely see these, but they help many western pilots clear the rocks as they claw their way skyward and into radar coverage.

Charted departure procedures (DPs) come in two general flavors. The majority of DPs are pre-packaged ways of getting out of busy airports where traffic all flows in the same direction on its way to the flight levels. The official term used to be Standard Instrument Departures, or SIDs, as they’re still commonly called.

DPs are primarily for efficiency. Everything is in one place and they can be issued by name: “Cleared to Cowbell Municipal via the Bigtown Four departure, then as filed….” They will also keep you clear of terrain, so long as you can comply with any non-standard climb gradients noted on the chart. They don’t, however, replace any textual departure procedures published for the airport.

I’m just going to call them both ODPs, and with (I think) good reason: When a charted ODP is published, it replaces the textual one. You no longer have the option of following a textual procedure, which brings us to the WATTR SIX.

Ironically, it starts with a bunch of text. Because the charted ODP replaces the textual one, all those low, close-in obstacles you usually skim over get moved to the chart as well. You’ll see none of those obstacles are more than 200 feet AGL and are generally within a mile of the runway. It’s assumed you’ll avoid these visually, or just soar over them, blessed by the power of the mighty rental Skyhawk.

The actual procedure isn’t complicated. You take off, turn north, and intercept a course of 075 to the WATTR intersection on V495. What’s unusual, and might make the devious angels chuckle, is that the course you intercept is a bearing off an NDB. Specifically, it’s the 255 bearing to ELWHA (075 from), which is the Localizer Outer Marker (LOM) on the ILS or LOC Rwy 8 approach into Port Angeles. LOMs are practically museum pieces today, and the ADF receivers needed to fly them often didn’t get fixed when they broke—a decade or two ago.

That’s because we use GPS, and the WATTR SIX is no issue if you have an IFR GPS with the departure procedure in the database. Simply load the departure and ensure the flight plan will sequence correctly from WATRR onward. You wouldn’t even know you’re flying a GPS overlay of a bit of history. The only sticky bit is ensuring you have the 410-foot-per-mile climb to 1100 MSL if you depart the short Runway 13.

But what do you do if you don’t have GPS or a vintage ADF? Even if you do have that and you’re pretty sure it still works, have you retained the skill to track an ADF bearing in IMC? With a crosswind? On departure? Probably as likely as remembering the steps to the Macarena on the first try.

Would you also be forgiven for flying the ODP for KNOW rather than the WATTR SIX? Looking at it from strictly a safety perspective, it’d likely work. The intercept to R-247 from Penn Cove (CVV) would require traveling about two miles further north, but it’s over open water. Not much to hit there. Still, in IMC, “likely work” doesn’t instill confidence.

Legally it’s less clear. There’s no requirement to fly the charted ODP under Part 91. If the WATTR SIX was part of your clearance, it would be required, but you could decline it and you have to decline it without an ADF or an IFR GPS.

ATC probably wouldn’t care if you requested to fly the ODP for KNOW. You probably wouldn’t even have to fly all the way to JIGEB. Once high enough to get on radar, you could get a vector to WATTR and be on your way.

While you’re at it, you could also look at the VOR that’s defining V4. It’s Tatoosh (TOU) out on the coast. Drawing a line on the chart from TOU to WATTR shows R-083 passes only 2.7 miles north of KCLM and converges on the course in the WATTR SIX nearing WATTR. That could work if you receive TOU in the climb. Again we have “could work,” and the snickering guardian angel.

The TOU gambit gets better if the ceilings are a bit higher and you take a page from the visual climb over airport (VCOA) from the WATTR SIX.

The VCOA is usually an alternative to an ODP. If you can’t fly the ODP because you don’t have the required climb or the equipment, the VOCA usually allows you to spiral up over the airport to the VOCA altitude and then continue to climb at 200 feet per NM on course in any direction. The VOCA’s altitude requirement is the minimum ceiling you need to circle upward and the visibility requirement lets you see important stuff as you spiral up. Here that’s 3300 feet MSL and 3 miles.

Occasionally, VOCAs include a course to fly, and that’s what happens in the WATTR SIX. When approved to depart via the VOCA version of the WATTR SIX you climb over the airport to 3400, the last 100 feet of which may be in IMC. After passing 3400 feet, continue to climb on a heading of 045 to intercept a course of 075 degrees from ELWHA and continue to WATTR.

If the ceilings are good enough, you could consider gaining some altitude over, or just north of the airport and tuning R-083 from TOU. If you’ve got it, head out on 045 and intercept. Fly the VOR signal to WATTR.

Is that flying the WATTR SIX? Heck no. Is it a legal alternative? Yes, but only because determining a safe path from pavement to your filed route is ultimately your call. If you don’t specify your departure plan, you can do pretty much whatever you want. So, I’m not saying you should do any of these things, only that it’s interesting to think about.

Just ensure ATC knows you’re airborne and on your own navigation to WATTR. KCLM and KNOW are both non-towered airports with Class E airspace to the surface, so you’d own the airspace if departing in IMC.

Regardless of how you depart Port Angeles, though, note the vast expanse of white on the en route chart south of the airport. There’s a reason. It’s the same reason they put Olympic National Park over there. (Think “scenic mountain views.”) Don’t get confused and turn that direction on departure, lest you find yourself talking to a different kind of angel.

Jeff Van West’s guardian angel seems to get a particular kick out of Port Angeles, WA, and more on approach than departure, but that’s a different story.