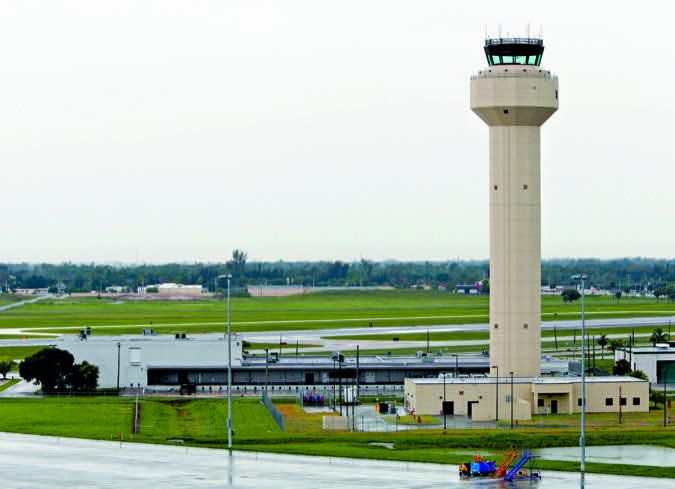 Recently our flying club toured the new tower at Palm Beach International in southeastern Florida. About 60 pilots signed up to see this multimillion-dollar facility. This is what we saw.

In 2006, the FAA announced a money-saving plan to eliminate 14 Terminal Radar Approach Control (TRACON) facilities in nine states, including the one at PBI, consolidating them into Miami Center. Years of debate ensued amongst concerned citizens and pilots, Congressmen, AOPA, PBI’s ATC specialists and their union. Despite the unresolved TRACON matter, the FAA contracted to build the tower minus TRACON space in 2008.

The central dispute was over “too many eggs in one basket.” If Miami Center became disabled, perhaps due to a hurricane, ATC services could be crippled across a broad area. You need only consider the disastrous “ATC Zero” fire at Chicago Center in 2014 to realize that despite many precautions, it can happen. In this case, Jacksonville Center, 350 miles north, would have to pick up the load.

Ultimately, the FAA relented in 2011 as the tower was nearing completion. The $19.2M tower, including a TRACON room at its base, came online in late 2015.

We are ushered into a small lobby and given the somewhat colorful backstory on how the tower came to be.

The old tower was an aging 1970’s squat 90-foot structure on the south side of the airport that lacked a view of the eastern end of Runway 28. In sharp contrast, at 241 feet and on the airport’s north side, the new tower commands an unobstructed view of the entire airport and beyond. It is one of the tallest landmarks in Palm Beach County.

The STAR(S) of the Show

Next, we are herded into a small training room that simulates a TRACON. We were asked not to take photographs in the actual tower cab, but the simulated TRACON room provided ample photo fodder.

There are two controller stations. The displays are provided by Raytheon as part of the Standard Terminal Automation Replacement System, or STARS.

The old displays were supplied by a long-defunct company. Additional information was written right on the display using grease pencil. The new displays are placarded against marking to protect them; an electronic marker does the trick.

STARS displays are awesome. Each one is a 20×20-inch high-resolution color flat panel. Designed specifically for ATC use, they are exceptionally readable at close range. The conventional round scope and six-second radar sweep line is history. These screens update every second. Prominent geographic features are displayed as are approaches and other procedures. The display can also show up to six levels of weather in color.

Of course, aircraft with their familiar data blocks are shown containing altitude ground speed and indications of VFR or IFR. Some of the information alternates to also show destination and aircraft type. The tracks are color coded to show if they’re being controlled from this position or by another.

STARS is fully-featured. For instance, STARS triggers Minimum Safe Altitude Warnings for a defined geographic area. If a target enters a MSAW alert area, STARS places a red LA (for low altitude) above the first line of its data block and a tone sounds.

The Conflict Detection System alerts if two targets are converging and are predicted to break lateral or vertical separation. A red CA (conflict alert) will appear, again above the first line of the data block. If the controller is tracking either target, a tone sounds. CAs can be suppressed in areas of excessive or spurious alerts, as well as for specific targets.

Using Terminal Proximity Alert, a graphic “J-Ring” can be configured around a target with its radius set by the controller. A TPA Cone projects outward from a target along its predicted ground track. Again, the length of the cone is controller-selected, and is most useful for separating in-trail traffic.

Lastly, the Converging Runway Display Aid, or CRDA, assists controllers in sequencing arrivals to converging runways. CRDA can be enabled for one or more Runway Pair Configurations, or RPCs. Basically, an RPC consists of a master runway and a slave runway.

CRDA can generate a “ghost track” on the slave runway of aircraft landing on the master runway. This clever tool allows the controller to easily stagger traffic between runways or synchronize the arrivals so aircraft land in parallel on both runways.

Quick to grab your attention is the colorful information display on a wall-mounted LCD panel above the radar display (Shown below left). It shows the current ATIS and active runways at Palm Beach (PBI), Stuart (SUA) and Boca Raton (BCT). PBI is using Runway 28R, or west flow because the wind is 260 degrees at eight knots. LAHSO is not in use. The smaller runway, 10R/28L is closed. Under the DTA/Flow column four local intersections appear in green. On the far left are handoff frequencies to Miami Center. The plethora of buttons at the bottom shows that this display is truly multifunctional.

Green buttons control various functions on the radar display such as range, maps and weather displays. For data entry, there is a yellow keyboard and blue numeric keypad. The panel is flush-mounted in the console desk adjacent to the radar.

Not shown are the paper flight strip printers. You might think that these paper flight progress strips had become obsolete. Not so. They were at each controller’s position both in the training and TRACON rooms.

After some time in the training room, we are taken into the real TRACON next door. It is early evening and traffic is slow. The controllers had time to take and answer questions. I ask what an IDENT looks like. In response, he instructed an aircraft to IDENT. A white flashing square appeared next to its data tag. I bet that pilot wonders to this day why s/he was asked to ident for no reason other than to satisfy someone’s curiosity.

Exiting the TRACON we take the elevator to the cab. Well, almost. A short stairway leads to the 550 square-foot cab. To achieve faster, safer, and more precise erecting of the structural steel cab atop the tower, the cab was built on the ground and mounted on the 187-foot tower structure in one piece.

The effort was well worth it. The cab view is breathtaking. Its 241-foot height, determined by a computer model, lets controllers see every part of the airport and beyond. It can withstand a Category 5 hurricane. Several controllers are working, and it is dusk. Never a better place to watch the sunset!

The cab is full of equipment, but the BRITE radar, hung from the ceiling, is the only piece of gear I recognize beside the mini-fridge. Frankly, we are so mesmerized by the view that we never look around much, and we don’t want to be underfoot.

The TRACON controls traffic within 50 NM of the airport, and the tower is responsible for traffic within five miles. The cab visibility is much greater, but the flat Florida terrain makes it difficult to see even KLNA, Lantana airport, just five miles south. There is certainly no problem sighting aircraft over 10 miles out on final. That’s what you get when you’re sitting atop a 20-million-dollar observatory.

Too soon it is time to go. On the way down I ask our host if the tower is state-of-the-art. To my surprise, he says no, there are further NextGen components to be installed and networked.

Tower visits are nice, but expect a bit of ATC agenda too. We are exhorted to turn our transponders on at engine start per AIM 4-1-20 a.3. They ask us to think before calling on the radio. Who and where you are and what do you want? Listen for radio calls. Don’t step on someone else’s transmission; wait until their exchange is complete before calling.

A lingering concern is concentration of traffic around the edge of PBI’s Class C airspace. This phenomenon likely occurs around airspace boundaries everywhere. Some pilots don’t care to call for clearance through the Charlie. It is probably safer to ask for clearance to avoid a flock of aircraft near you.

Another issue involves aircraft equipped with TCAS II traffic avoidance equipment. If TCAS generates a resolution advisory, the crew must follow it and advise ATC as soon as possible. Even though it’s legal to be in the arrival or departure path of such an aircraft outside Class C airspace, an RA triggers some kind of follow-up paperwork explaining the circumstances around the alert.

Controllers these days seem to have attended charm school. There’s a pervasive “How can I help you?” service-oriented mentality. Everyone we met was knowledgeable and helpful. Host Dana even came in on his day off to shepherd us through the evening. You can arrange a visit to your facility per AIM 4-1-6, “Pilot Visits to ATC Facilities.” Or make contact through a FAASTEAM member, Ground Control or by calling the tower number in the Chart Supplement. The ATC tower and TRACON people seem to have a desire to show off their “toys.” Who can blame them?

Fred Simonds is a closet controller-wannabe. For now, see his web page at www.fredonflying.com