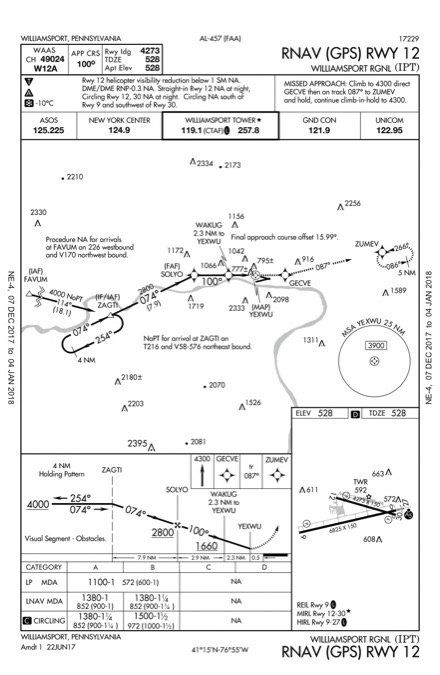 Perhaps it’s a bias from learning to fly in Colorado, but I never think of Pennsylvania as particularly mountainous. Yet mountain-dodging is what jumped to mind looking at the RNAV (GPS) Rwy 12 into Williamsport, PA (KIPT). Approach designers don’t toss in a 26-degree turn at the final approach fix for no reason, nor do they allow another 16-degree turn from the final approach course to the runway—unless they have to.

However, the chart just shows a river and a few towers. What gives?

Shades of Green, or Brown

If you’re financially blessed enough to have the Jeppesen chart, it’s crystal clear that terrain rises on both sides of the final approach course. The approach lets down into the valley by starting at 4000 feet over ZAGTI then following the river on a course of 074 to 2800 feet by the FAF at SOLYO. To continue following the river, the final approach course must change to 100. Note closely the stepdown inside the FAF: You must maintain 1660 until WAKUG before you can descend to MDA. Following similar logic, the missed approach takes you further down the river as you climb to GECVE before striking out overland to the MAHP at ZUMEV.

Even without the Jeppesen terrain shading, the river is a big clue for the geologically minded. Rivers cut down through rock and make valleys. (At least that’s what the tour guide at the Grand Canyon told me.) The Sectional Chart hints at the hills if you notice the green tinting darker only a few miles from the airport.

Another hint lies in the minimums. Not only are circling minimums NA for Cat C and D, but so are straight-in mins. No fast-airplane circling mins can mean a single tall obstacle or many. But the fact that the straight-ins also show NA suggests that the problem is turn radius at higher speeds conflicting with a whole area of trouble—a.k.a. terrain.

Even WAAS fliers only get an LP approach with no official vertical guidance, and no descent angle shown on the chart. This means it’s worth calculating your own descent angle from the FAF to touchdown. That would be 2800 feet at SOLYO to the TDZE of 528, or 2272 feet to lose in 5.8 miles. That distance is the sum of all the segments from SOLYO to the runway threshold, plus 0.1 NM from the threshold to the beginning of the touchdown zone.

Instrument approaches get evaluated for obstacles in multiple “surfaces” extending up and away from the runway, or points near the runway. Describing them all would fill more than a year of these articles, but the two we care most about when studying approach charts are obstacle-evaluation surfaces that slope at 34:1 and 20:1.

The 34:1 surface rises one foot for every 34 feet from the runway. If this is clear of obstacles, a gray “stipple” might appear on the chart from the FAF to the runway. You also might see a VDP charted.

This chart does more than hint, though. It outright warns you. The chart note in the profile view means there are obstacles in the 20:1 surface. There’s no rule as to when this note appears; it’s at the discretion of the designers. If you’re wondering what those obstacles are that you’re responsible for seeing and avoiding, just look in the takeoff minimums for the airport. But pour yourself a cup of coffee first—it’s two pages long. Maybe the FAA survey crew got paid by the word. (My personal favorite in the list was for Runway 27: “Ground.” Uh, thanks.)

Some of those obstacles must be unlit, because this approach is nearly useless after dark. The notes say NA for a straight-in at night, and NA for circling to either Runway 12 or 30 at night. That leaves circling to Runway 9 or 27, both of which have their own approaches anyway.

If you did circle for 9 or 27 you can’t do it south of the airport. That’s a handy note because Runway 9 and Runway 30 are both right traffic, and you’re supposed to circle on the side of the traffic pattern anyway. That’s FAA regs, not circling protection, but it’s still a rule. You know this by checking the Chart Supplement (formerly known as the A/FD).

While you’re there, check out the section on airport lights. It’ll explain why there’s an inverse L, indicating pilot-controlled lights, by the REIL for Runway 9 and the HIRL for Runway 9-27, but only a star by the MIRL for Runway 12-30. Those medium intensity runway lights aren’t pilot-controlled. They just go off when the tower closes. Good to know, even if you’re planning to land on the other runway at night. You might doubt that you’re looking at the right airport.

This chart clinic is all about the notes, so it’s worth picking at two more in the plan view. The note for a “No PT” route normally appears on specific segments between an IAF and an IF. Look at some typical charts to prove this to yourself. Go ahead, I’ll wait.

This chart is different in that you could arrive at ZAGTI from the southwest on V58/T216, cross it as an IAF, and proceed directly to SOLYO as an FAF. That requires the leg is NoPT—but only for the correct arrivals from the southwest. You can’t mark the whole leg NoPT because anyone coming from the northeast must fly the racetrack pattern, which is the procedure turn here. The solution is the planview note, rather than NoPT on the leg itself.

What if you get direct ZAGTI from somewhere southwest? I’d just confirm with ATC that I’ll be straight-in from ZAGTI and call it good. But that’s me.

The last, lovely note is only on the government chart, pointing out that the final approach course is offset by 15.99 degrees. Maybe it’s because I learned from irascible bush pilots in Colorado, but I never mastered flying to a hundredth of a degree. Come to think of it, the Colorado airport wasn’t too far from Jeppesen headquarters in Denver. Maybe that speaks to why Jepp rounds up to 16.

Jeff Van West struggles to fly to a whole degree, or even a handful of them, but he still appreciates a chart that gives him precisely—and we do mean precisely—the info he needs.