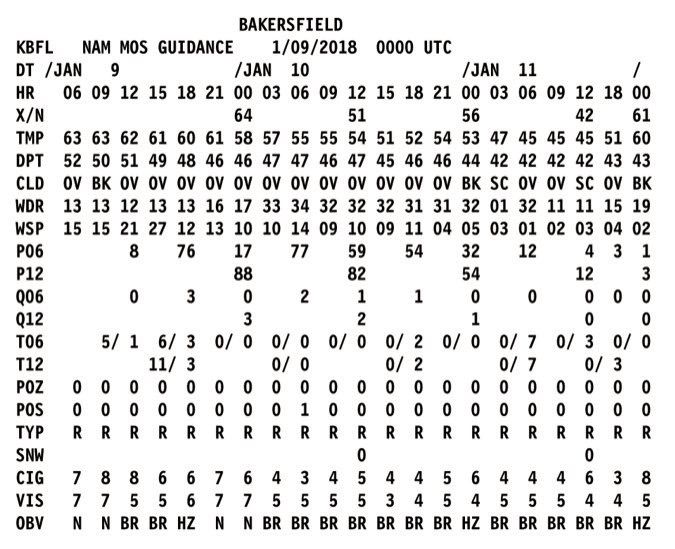 Models like the NAM, RAP, and HRRR are often considered the cutting edge of weather forecasting on supercomputers. Indeed, these are some of the best forecasting innovations of the past 15 years. They are a class of tools called dynamical models, designed to solve conditions in the entire atmosphere across a large forecast zone. Typically a three-dimensional grid is built with a granularity of several miles, and the equations of motion are solved at each gridpoint to provide us with temperature, pressure, moisture, and wind.

Extracting this raw data directly does not provide good information for planning purposes. Forecasters rely onstatisticalmodels, which offer better integration of all the available information. A statistical model often usesdynamicalmodels or other data as a source of information, and then uses a system of predictors to determine the weather.

The statistical model used by the National Weather Service is called MOS, or the Model Output Statistics system. It was developed in 1968 alongside the early primitive equation models, and has been refined extensively since then, building on an enormous base of data verification. The NOAA Model Development Laboratory currently oversees the production of official United States MOS data.

Though it might seem like MOS is a direct output of dynamical model data, this is not the case. The MOS data is a specially-designed forecast system that uses many weights and predictors for each station, adjusted regularly based on verification of observed data. For example a parameter might be the forecast relative humidity exceeding 75 percent at Philadelphia, in which case it contributes a certain coefficient value to the forecast of precipitation for that station. Additional weights might involve the sea-level pressure being below 1012 mb or precipitable water exceeding 1 inch.

This MOS data is an accurate source of forecast data and can be used to supplement the official TAF and gauge the degree of confidence in the forecast. MOS data also provides additional quantities that are helpful, like precipitation probabilities. And it’s available even for small airfields that have no TAF available. The newer gridded MOS system also offers data for airports that aren’t officially in the database. And the biggest advantage: MOS provides forecasts that range farther into the future than the 24-30 hour period provided by the TAF. If you do a lot of flight planning, you need to look at MOS!

The National Centers for Environmental Prediction maintains the MOS system on the Internet—search for “NOAA MOS.” You’ll see several different types of MOS data. You might use the tables most often, but meteograms are available for some of the fields.

First there is the mesoscale (MET) MOS. The MET name is derived from the Eta model, which was one of the earliest mesoscale models and was available through much of the 1990s. When it was phased out in the mid-2000s, it was replaced with the mesoscale NAM (North American Mesoscale) system. This should probably be your first choice for forecasts if you only need to look at the next three days.

The aviation (MAV) MOS is based on the GFS, or Global Forecast System. This is a global model that looks out to 384 hours. It has only limited skill at smaller scales of space and time, as it does not model convective weather regimes very well. However it excels beyond about 2 days. Past this point you should use MAV or at least compare the two, as the MET MOS will have errors arising from systems far upstream entering the limited forecast domain.

There is also the extended (MEX) MOS. This is based on the same data as the GFS but is focused more on the long term. It only provides forecast intervals of 12 hours instead of three and has fewer products, but it spans much further into the future. Data for up to six days out should be fairly accurate, with a gradual degradation past this point.

Let’s go through the MOS sample for Bakersfield, California (above) and see how to read these products to get you thinking more like an aviation forecaster.

MOSInformation header—the top rows will give the location, the ICAO airport code, the source of the model (such as NAM), and the model run time, indicating the date and hour on which the MOS data was based.

TMPProvides the observed air temperature in degrees Fahrenheit. Be alert for sudden changes when reading left to right. Changes of 10 degrees or more over three hours might indicate passage of either a front or an outflow boundary of some kind, with a risk of low-level wind shear and mechanical turbulence during the transition period.

DPTProvides the observed dewpoint in degrees Fahrenheit. If significant thunderstorm probability is indicated below, the hour with highest dewpoint often corresponds to the time of greatest storm risk.

CLDThis contains a categorical assessment of total cloud cover. This is a snapshot estimate of cloud for that particular hour. This may include CL for clear (0/8ths cloud), SC for scattered (1 to 4/8ths), BK for broken (5 to 7/8ths), and OV for overcast (8/8ths cloud).

WDRThe wind direction relative to true north, in tens of degrees. To convert to a compass or runway heading you’ll need to apply the correct magnetic declination. North is 36.

WSPShows the wind speed in knots. This is sustained wind and provides no information on gusts. However if the T06 codes are nonzero, this suggests showery conditions, with an unstable air mass and some gusts possible. A large temperature-dewpoint spread with nonzero precipitation probability is also favorable for gusty winds.

P12Same as P06 except for the preceding 12-hour period.

T06The T06 code is a couplet of two numbers. First is the probability of thunderstorms, followed by a solidus, “/”, and then the probability of severe thunderstorms, during the six hour period shown. The exact time period is often difficult to see and is often not explained in documentation; it ends at the hour above thelast digit, thus in the example shown for Bakersfield, 5/1 is valid for 06-12Z and 6/3 is for 12-18Z.

POSThis provides the probability of snow during the 12 hours ending at this time. This is not a percentage of the area that will potentially be covered with snow, rather it is a measure of the likely risk of snow at the station for that time period.

TYPThe TYP code gives the conditional precipitation type. Only three codes are used: R for rain; S for snow; and Z for freezing precipitation or ice pellets. Note this is not what kind of precipitation will fall, but rather themost likelyform it will take should precipitation occur.

You can relate this to the indicated precipitation (Q06 or Q12) to get the dryness or stickiness of the snow. Simply obtain the ratio between snow depth and precipitation. A ratio of less than 10:1 indicates heavy, sticky snow, and above 10:1 suggests dry fluffy snow. For example, a snow code of “4” (4 to 6 inches) to a precipitation code of “4” (0.50 to 0.99) inches gives a ratio of about 7 to 1, indicating sticky snow.

An improvement on plain MOS is LAMP, Localized Aviation MOS Program. This is an enhancement that was developed by NOAA in the late 1990s, and uses additional statistical models, regression equations, and threshold values to provide timelier and higher-detailed forecasts within the next 24 hours. This makes it highly useful for forecasters in writing TAFs.

Most of the forecast information in the MOS is available in LAMP. In addition we have wind gust (WCG) in knots, with NG indicating no gusts. We also have PPO and PCO, which give the probability of precipitation occurring on the hour and a yes-or-no precipitation indicator, respectively. There is also LP2 for the probability of lightning for the preceding 2 hours, and LC2 gives a forecast of lightning given as N, L, M, or H, for none, low, medium, or high lightning risk. The CP2 category gives the probability of convective showers or storms for the 2-hour period, with CC2 giving a potential for this in a similar manner to LC2.

As with MOS, there is a webpage for LAMP—just search “NOAA LAMP.” The data is generated hourly, so this is the best choice for keeping an eye on breaking changes at a specific airfield. Don’t forget to monitor the TAFs too.

With that, you now have what’s perhaps the ultimate planning tool. This can help well beyond the normal assortment of TAFs for anticipating extra fuel, looking for icing risks, and deciding on a good alternate. And the MEX’s 8-day range is perfect for keeping tabs on next weekend’s cross-country plans.

The MOS products are time-tested, tailored for each station, developed by specialists, and are so reliable that forecasters often refer to them in official forecast discussions. It’s recommended you check on them at your favorite airports and keep tabs on how well they do compared to official forecasts and observations. Some forecasters are also careful to look for biases, which are anomalies that might be seen regularly in the data, such as the wind direction being 20 or 30 degrees off or the visibility regularly being underestimated near dawn. If you use MOS data a lot, look for these biases. Being able to recognize them helps you extract the maximum value from this product.

But keep in mind that this is just the solution from a forecast model and doesn’t have the benefit of human intervention. It’s also somewhat of a “spot observation” without an integration into the big forecast picture. So you’ll want to use this in conjunction with flight weather briefings, TAFs, and Aviation Weather Center products, when they’re available.

Meteorologist Tim Vasquez used to brief B-1B crews in the morning. Now he sleeps in and writes books and software. See his website at www.weathergraphics.com.