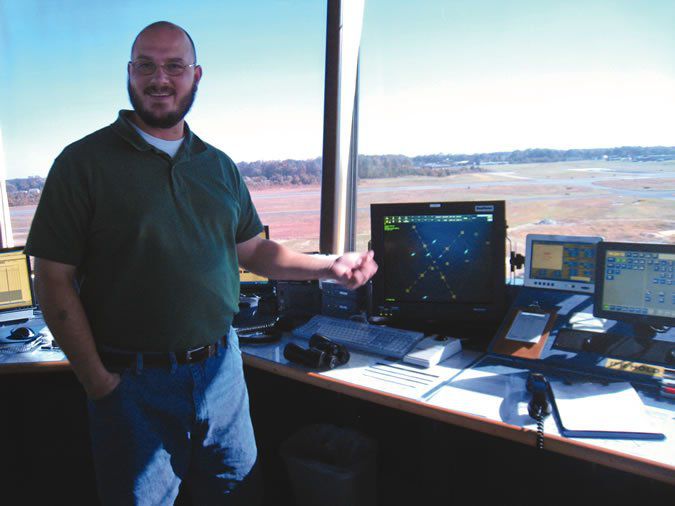 Say what you like about pilots flying around with their heads up their MFDs rather than looking outside the cockpit, but when it comes to spotting traffic more than dozen wing-lengths from the airplane, a glance at traffic display is worth a hundred FAA-approved, 10-degree scans out the window.

Tower controllers are in the same boat: they peer through binoculars trying to find the pilot who just reported 10 miles southeast. After a while, they get used to certain voices and know to look six miles northeast instead. Such are the tricks of the trade when working Local control.

Some towers are lucky enough to have a remote feed from a nearby TRACON radar, which helps quite a bit. Depending on the tower and the associated TRACON, these displays could be a monochrome unit salvaged from a Tandy TRS-80 and installed during the Reagan Administration or a color LCD showing the same images as the most updated Automated Radar Terminal Systems (ARTS) that form the backbone of our Approach-Control radar.

But ARTS is the old stuff at the TRACON level. Five years ago we took a look at the Standard Terminal Automation Replacement System, or STARS. These systems are the replacements for ARTS, and are now running at dozens of locations around the country.

As of this fall, towers are getting a piece of this action with STARS LITE. The “LITE” part is a cutesy title that might mislead one to think it’s a dumbed-down version of the TRACON’s STARS system. It actually stands for “Local Integrated Terminal Equipment.”

STARS in the Tower

The first STARS LITE installation in a GA airport is at Easton, Md., an airport that only got its tower a couple years ago. The STARS part is the same STARS that is used in the TRACON—same screens, same Sun workstation, same basic software. The local integration, or LITE, is that the display is centered around the Towered airport and set up with local data. The display at Easton in its most basic mode shows the airport runways (two crossing runways for 4-22 and 15-33) as well as the initial- and final-approach fixes.

Over that basic display the Tower controllers can layer up to 32 different maps. That’s probably a bit of overkill, as the Air Traffic Manager Micah Risher showed us two that they liked and used now and again. One was local geography with the inlets and islands of the northeast corner of the Chesapeake Bay, and the other was local roads. If a pilot calling in is having trouble finding the airport, Risher could ID him on the scope and say, “See that highway you’re over? Follow it south about 12 miles. The airport will be on your right.”

In addition to the graphical overlays, they can overlay weather as seen by the radar at any of six levels, Level One being usually benign rain and Level Six being capable of rearranging your aluminum. They can also filter the display to show, say, only Level 3 and higher, to issue alerts or suggest headings for VFR traffic to stay well clear.

Easton’s coverage for STARS LITE reaches out 64 miles from the airport, but as the display is based on the local radar, that could vary from site to site. To qualify for STARS LITE at all, the area’s TRACON or ARTCC radar must reach pattern altitude at the local airport. That’s simply not an option in many places. Also, STARS or STARS LITE is just the display technology. It’s only as capable as the radar that drives it. So some STARS LITE towers might not have the update rates or weather detail that others do.

The display can handle ADS-B targets and show full datablocks if hooked up to the correct ATC computer networks, but right now Easton only sees the basic data from the radar: transponder code, speed and Mode-C altitude.

One of the controllers on duty when I was there politely pointed out that if you make an initial VFR call to the Tower as six miles out and you’re really four miles—and already inside the Class D—Tower is now going to know. The other two laughed and added that they aren’t using the display for enforcement purposes, but that you really ought to know where you are.

If you’re not sure, though, you can now ask the Tower (at least around Easton). They’d be happy to tell you where they think you are and help you on your way. Tower Controller Damian Gatberlet and Ryan Moberg told us that botched position reports are the main thing they like about having STARS LITE. Even if they don’t correct the pilot, it makes for better planning.

Too often a pilot would report the final-approach fix for Runway 4 (about five miles out) on a hazy summer day when he was really more like two miles out. This gave the controller a mistaken belief that he had enough time to launch a biz jet that was holding short. The jet would be turning onto the runway and powering up right about the time the controller saw a landing light come out of the haze on short final. The resulting hurry up for the jet and break off for the landing traffic upset everyone.

Risher gave us a couple examples where the display keeps everyone happy without the pilots ever knowing. “We had a Falcon on the approach for 4 and a Cirrus setting up for the approach to 33. I could look at the scope and see something had to be done. So I gave the Cirrus a hold.” Risher added, “He was practicing anyway, so he was happy to do it.”

Towers usually don’t give vectors or IFR instructions to aircraft (see sidebar), so Risher was only able to do this because the Cirrus was VFR. But with previous TRACON experience, he was able to provide the same kind of service. Towers with STARS LITE (or similarly accurate displays based on ARTS) can give traffic calls—”Traffic, two o’clock, five miles, descending through 4500, a Hawker Jet”—but they don’t use the term “radar contact” and they don’t (usually) make their own vectors for IFR traffic.

They can coordinate with the TRACON for you. Risher again: “I had a Cessna on a practice approach for Runway 4 and I could see Level 4 weather over our standard departure heading. Had I given him 350, he would have plowed right into it. I coordinated with Potomac and got him a different heading for his departure in advance.”

The tower can “suggest” a heading in lieu of a vector if you want it. As the controllers put it, “About 10 out of 10 times, that heading will be correct.” If you don’t have on-board weather, that requested heading might be to avoid weather some distance out that you can’t see but they can on the fancy new system.

As much as the controllers lauded their new radar display, I watched them work light traffic and they rarely gave it more than a glance when aircraft checked it. There were also a pair of real binoculars sitting on the counter. Those didn’t get picked up once.

I get the feeling those binoculars are going to get dusty, as pixels replace trying to pick out targets in the distance. But when traffic is close to the field, it’ll be all eyeballs just as it has always been for Local control.

Eyeballs when close to the field? Perhaps a few MFD-focused pilots should take a lesson from that themselves.

Jeff Van West has made a mental note to stop reporting southeast of Easton when he comes down from New England.