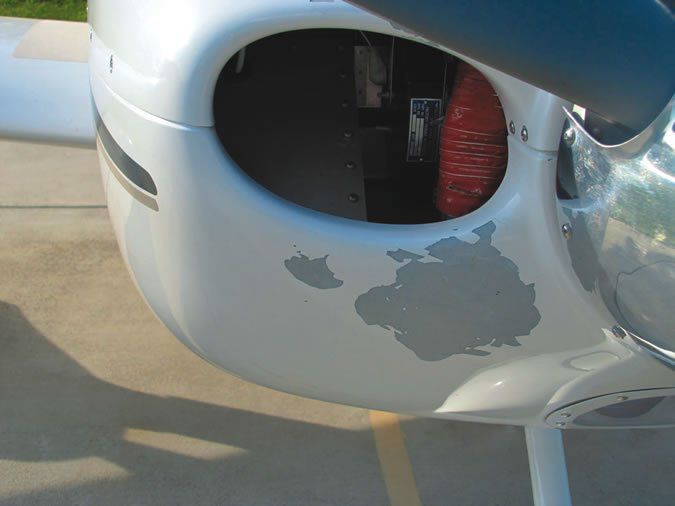 Our flight from Potomac Airfield in Friendly, Md.. to Dublin, Va., (to pick up a new puppy) would take about an hour and a quarter, despite steady headwinds paralleling the Blue Ridge mountains. The only minor wrinkle came from two small cells approximately 10 miles north of our destination. The cells were staggered, traveling west to east across our route at 27 knots, with tops at 43,000 feet and 28,000 feet, respectively.

Roanoke Approach confirmed that I was aware of the cells and suggested I consider passing behind the more westerly cell and in front of the more easterly one. I thanked the controller, advised that we would consider his suggestion and would report any course deviation. My friend (a pilot) and I discussed it for two minutes before deciding it was a bad plan to put ourselves between potentially dangerous cells while in a 30-knot headwind. We deviated 15 degrees west from the arrival procedure to Potomac to get 15 miles or so clearance as we passed behind both cells.

We were about 30 miles from the field and about to start our VFR descent when I noticed a mist of precipitation across the windscreen. Moments later I heard what I initially thought was the patter of light rain. But the moisture wasn’t rolling off the windscreen the way I’m used to with rain. That’s when I realized this was not mist on the windscreen nor the sound of rain; it was small hail!

I banked hard right and started a climb for 7000 feet for the higher peaks expected in that direction. Within 10 seconds, as we were leveling the wings from our turn to 270 and passing 6800 feet, the terrifying sound of hail pounding the hull stopped as abruptly as it started. Everything was calm and eerily serene. After a few basic maneuvers to test operational integrity of the aircraft and regain our composure, we commenced a VFR descent and landed without further incident.

Our post-landing inspection revealed multiple breaches along the leading edges, but the damage seemed only to the paint, with no obvious compromise to the exposed composite layer. We gave all the structural surfaces and controls the best checks we could and felt OK about taking the plane around the pattern. Two touch-and-goes went fine, so we headed home with our new cargo. The return flight was without incident.

How Did That Happen?

Despite fighting a steady, 25-knot headwind, at no time did we feel any turbulence or anything to tip us off that we were dangerously close to a thunderstorm. In fact, we were flying in sunny skies at 6500 feet with an OAT of 58 degrees F.

Hail normally forms from descending moisture droplets freezing and being forced back up into the cloud’s freezing levels by updrafts, where they grow in size. The process can happen to hail several times before it is ejected from the cell or becomes heavy enough to fall through the updrafts and out the base.

Usually hail is encountered in front of a squall line’s movement or in the northeast sector near a supercell or tornado. When multiple, isolated cells are moving and building together, they can create an area of weather turbulence in their wake (private weather system) that is capable of suspending frozen crystals well behind the visible weather.

The hail that we encountered was 20 miles behind the cells that created them. Given that the OAT was 58 degrees F, the hail that found us had to be melting, losing size and weight by the minute. This explains how it could stay aloft so far behind the storm. The temperature on the ground was 73 degrees, so none of it was making it to the surface for someone to detect—and warn us. It might not even have made it that far as rain, evaporating before it reached the surface.

The only warning we got was the white mist that appeared on our windscreen. It wasn’t moving, like liquid precipitation should, and that could have been a tip-off. Had I recognized it was crystallized drizzle that was surrounding a column of hail, I might have reacted early enough to avoid flying into the suspended hail.

During the 12 seconds of audible terror, we never saw the hail, but it certainly left its mark.

Mark Zurmuhlen is a Cirrus SR22 owner who now gives thunderstorms a clearance at least as wide as his deductible.