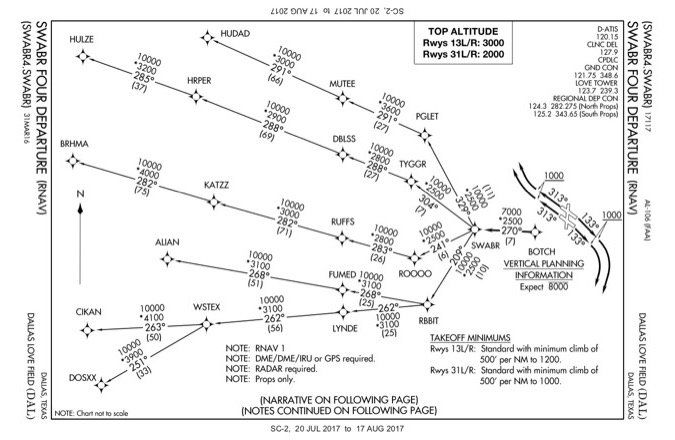 In 1957 the Soviet Union launched Sputnik, the first man-made satellite. The American psyche was troubled by the potential of this technological second place. This planted the seeds of one of America’s greatest military and technological innovations—GPS.

As Sputnik whirled around the planet, two American physicists realized they could use the Doppler Effect to determine its position. This observation led to the first satellite navigation system, successfully tested in 1960.

Notwithstanding a few technophobes and fiscal limitations, pilots have embraced GPS. But, the world of PBN can be confusing with its continual advancements. Pilots seemingly need GPS to navigate all the acronyms.

If you don’t want to play, just avoid anything notated with RNP minimums or authorization required. Most GPS receivers provide RNP 2, RNP 1 and RNP Approach operations. But, as discussed previously, RNP approach minimums require a navigation specification not automatically granted. RNAV for en route, departures and arrivals is fair game, but there are nuances to consider.

While the DoD does monitor the satellites in the GPS constellation, the government can’t monitor the performance of the box in your plane. Instead, the box must monitor itself and tell the pilot when it doesn’t meet required performance. The textbook definition of RNP is area navigation “that includes the requirement for onboard performance monitoring and alerting.” When flying through a mountain pass, it’s nice to know you really are where the box says.

How does onboard performance monitoring work? The old school method is RAIM, which is still used for TSO-C129 receivers and TSO-C146 when WAAS isn’t available. RAIM, Receiver Autonomous Integrity Monitoring, is automatically performed before a GPS approach. Integrity refers to the “truth telling” ability of navigational performance. RAIM is the lie detector when not using WAAS.

RAIM ensures that enough satellites will be in view to achieve the needed RNP. The RNP value is also the Horizontal Protection Limit (HPL) because the pilot is alerted when the position uncertainty potentially exceeds this limit.

RAIM works by using one more satellite than is needed for position and timing. The box compares computed positions swapping in the extra satellite for the others. It’s all good if the computed position doesn’t change. If it does change, something is wrong.

Many GPS navigators have fault detection and exclusion (FDE). The first step is detecting a fault—a satellite that isn’t providing good info. The second is excluding that satellite’s information from the position calculation. FDE requires an additional satellite over that required for RAIM—typically six.

RAIM is checked before using non-WAAS GPS, or when WAAS is not available, for RNAV 1 (arrivals and departures) or RNAV 2 (en route). AC 90-100A and 90-105A, covering RNAV and RNP operations respectively, both state that “RAIM availability must be confirmed for the intended route of flight … for the intended RNAV 1 or RNAV 2 operations.” (AC 90-100A)

Numerous methods to check RAIM exist. The easiest is using the navigator itself, which does report RAIM. Another option is to use the FAA’s Service Availability Prediction Tool website. Some flight planning software might also include RAIM checking.

WAAS effectively replaces RAIM. Instead of having your navigator identify a satellite anomaly, a Wide Area Reference station identifies the anomaly and sends a correction or exclusion message to your box. As the FAA wrote in describing WAAS, “The Wide Area Augmentation System (WAAS) provides an augmentation signal to GPS … that provides correction and integrity information intended to improve positioning navigation and timing.” The key word is integrity. WAAS ensures truth telling.

Even with WAAS and RAIM, GPS navigators can still get lost, although it’s rare. Termed a loss of integrity, getting lost can happen when not enough satellites are in view or a signal becomes corrupted. For navigators with VNAV approach capability, both horizontal and vertical accuracy are considered.

If the signal does not meet the vertical protection limits, the box won’t let you even select a GPS approach with VNAV. If you can’t fly it, you can’t load it.

You typically only see a loss of integrity when some approved organization intentionally messes with GPS signals. NOTAMs usually forecast these outages, but outages can occur without notice.

Checking NOTAMs is critical when navigating with GPS, particularly with WAAS. Since the WAAS program conducts the integrity monitoring (instead of having to perform a RAIM check), the only way to see if you’ll have a loss of navigational performance is by NOTAM. Even when doing a RAIM check, satellites with known issues need to be taken out of the calculations. NOTAMs advise pilots of known satellite problems.

A black and white world would be nice, but when it comes to GPS NOTAMs, many embrace the gray. As described in the AIM, a NOTAM indicating “GPS MAY NOT BE AVAILABLE” or “UNRELIABLE” doesn’t preclude use. Instead, ATC is supposed to know if GPS testing is occurring and should not allow actual instrument GPS approaches during that time. Implicit in the government’s description of GPS-testing NOTAMs is that accuracy would not be downgraded below the HPL required for en route and terminal operations.

When utilizing RNAV to the fullest there are some items to be aware of in addition to checking RAIM (if required) and NOTAMs.

The first is simple—filing the correct flight plan with equipment codes. RNAV SIDS and STARs require an ICAO flight plan. Entering equipment codes and capabilities can get extremely complicated. Fortunately, the FAA isn’t into all the unnecessary complication common to parliamentarians and only cares about a couple equipment codes. For most of us, a G (GNSS) and S (standard equipment) for equipment permits flying RNAV from take-off to touchdown.

Check for a current database. The days of getting away with one or two updates a year are gone. To fly RNAV, “onboard navigation data must be current and appropriate for the region of intended operation and must include the navigation aids, waypoints, and relevant coded terminal airspace procedures for the departure, arrival, and alternate airfields.” (AC90-100A)

Procedures should be selected from a current database rather than built by hand from the fixes. Getting a STAR or SID from the database typically assures correct scaling and sensitivity for the procedure. It is permissible to input a procedure by fix names. But, doing so might result in GPS sensitivity automatically changing to en route at the wrong time.

Don’t even think of inputting fixes by lat/log or bearing/distance; it’s forbidden. Don’t mess with a procedure by making a fly-by waypoint a fly-over waypoint. The procedure is designed the way it is for a reason.

Before flight, the last step is to verify the route. Check what’s in the navigator with what is published on the charts and the clearance. Occasional database errors do sneak in. More commonly, an errant button push sends you to a fix on a different continent. Some transitions and clearances can be confusing. A review of the chart and route on the chart or MFD will help identify any zig-zags before ATC ominously asks, “Where are you going?”

RNAV SIDs and STARs have specific requirements. A new concept associated with RNAV SIDs is RNAV engagement altitude. It is defined as the altitude at which “the pilot must be able to engage RNAV equipment to follow flight guidance for lateral RNAV.” (AC 90-100A) The RNAV engagement altitude is no later than five hundred feet AGL. This peculiar requirement answers why many departures required an initial climb rate of five hundred feet per nautical mile, such as the SWABR4 RNAV departure from DAL. (Note that the non-RNAV CYOTE 8 departure only requires a standard climb rate when departing the 31s). It has nothing to do with obstacles, but simply to get flights to start following the lateral path as soon as possible.

It’s easy to forget the requirement to use a flight director and switch it off when flying an arrival. Flight directors can be annoying when trying to hand fly. Plugging in the director commands while flying more than doubles your workload.

The power and fidelity of GPS make it the go-to navigation system. With a TSO-C129 or TSO-C146 navigator you can fly RNAV 1 (departure and arrivals), RNAV 2 (en route including G and T routes) and RNAV approaches. Technically, you’re approved for RNP approaches, but RNP approaches doesn’t mean RNP minimums. Instead, the RNP approach category contains LNAV, LNAV/VNAV, LP and LPV. Any procedure containing “authorization required” is off limits. The most common authorization required approaches are titled RNAV (RNP).

There are some steps to ensure RNAV bliss. Keep the database up-to-date. When filing an ICAO flight plan, include code G in box 10. Check GPS NOTAMs. If WAAS is NOTAMed unavailable, conduct a RAIM check for the route. A “MAY NOT BE AVBL” NOTAM means just that. It’s probably a good idea to have a backup navigation source ready if “may not” turns into “isn’t.” When flying RNAV 1 ensure the flight director or autopilot is on.

The world has come a long way since Sputnik beeped over the heads of school children. The military transitioned from developing satellite navigation to figuring out how to interfere with it. Aviation embraced the development of satellite navigation. Now GNSS is the backbone upon which PBN flies.

What’s the big deal about approaches with RNP mins? Normal GPS approaches perform to a 0.3 NM tolerance, the same as many RNP minimums. The most significant difference, and advantage, is elimination of the secondary obstacle clearance area.

Another feature of approaches with RNP mins are curved courses known as radius-to-fix (RF) legs. Non-RNP approaches can also have RF legs, like the RNAV (GPS) X RWY 24 into KCRQ. Non-RNP procedures with RF legs are rare because “RF leg limits IFP availability to some users; therefore use of an RF leg requires Flight Standards approval.” (FAA Order 8260.58A) Additionally, non-RNP procedures require a two mile straight segment before the final approach segment. These two factors make RNAV (GPS) approaches with RF legs as rare as a Northern White Rhino.

Jordan Miller flies for a major U.S. airline where he really doesn’t need to worry about this stuff since what he can do is outlined in his SOP.