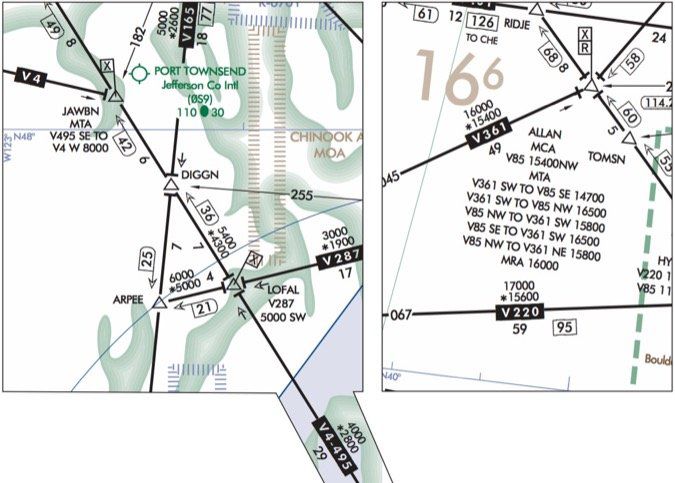 I loved “The MTA Song” as a kid. You know it: Charlie gets caught a nickel short and left to ride the rails of the Boston subway forever because the fare went up during his morning commute. I loved its joyful ridiculousness, and I loved that my dad would belt it out for us on his old Martin. (He was a beatnik—a hippy before it was cool.) Charlie’s wife handing him a sandwich always bugged me though. Why didn’t she just hand him a nickel so he could get off the train?

Now I’m older and married, and I understand she might have had a reason.

The same three letters—MTA—had me feeling a nickel short when I first saw them on a low enroute chart. We learn in our IFR infancy that the minimum enroute altitude (MEA) along an airway might get trumped at a fix where there’s a minimum crossing altitude (MCA) or a minimum reception altitude (MRA).

Yet here I was looking at letters MTA by the JAWBN intersection of V-4 and V495 over Port Townsend, WA, and thinking, “I got nothing.”

Maybe you got the memo about the 2012 change, but I didn’t. Minimum Turning Altitudes are unusual, and were arguably obsolete before they even appeared in the Federal register.

The relevant AIM section is 5-3-7, and can be summed up as: “Above 10,000 feet MSL, faster aircraft might stray a wee bit beyond the protected airspace while turning. If someone inconveniently left a mountain in that same spot, a minimum turning altitude can be published as a precaution. Pilots must stay at or above the MTA from the turnpoint (the fix) until back on the airway.”

Because MTAs protect against an overshoot, they’re directional. The MTA at JAWBN only applies southeast bound on V495 to the hairpin westbound on V4. A glance to the RNAV (GPS)-A approach to Port Townsend reveals what the enroute chart southwest of JAWBN omits: mountains. Apparently, they’re close enough that there’s an MTA published to keep you off the rocks.

The MTA at JAWBN is similar to the MCA down V495 at LOFAL. The difference is that the MCA at LOFAL is 5000 when heading southwest on V287. Therefore, you’ll cross LOFAL at 5000 but keep climbing to the 6000 MEA. The MTA of 8000 at JAWBN only applies until you’re back on V4, at which point the MEA of 5800 applies. Either way, you’ve gotta hit an altitude before the fix, so the chart symbol of the flag with an X decorates both restrictions.

MTAs can render fix data as confusing as Boston’s Green Line past Copley (trust me on that reference). Check out ALLAN intersection northwest of Denver, CO. There are eight possible ways to transit that intersection, five of which have MTAs. There’s also an MCA and an MRA, which creates so much copy the text runs on like the opening of Star Wars.

Now that you know what the MTA is, here’s why you don’t care unless you’ve got that new turbine Lancair firewalled and couldn’t afford a GPS. TERPS design standards already ensure more protection on the outside of a turn than the inside. Back when dual VOR receivers made a dream panel, standard IFR practice was to cross the fix before initiating the turn. This guaranteed an overshoot on all but the shallowest airway turns.

The more acute the turn, the longer the overshooting arc before you’d rejoin the airway. The faster your airspeed, the larger the diameter of that arc. Add a little tailwind and you might drift miles past the fix. Kinda makes you wonder why no one proposed MTAs in 1972, rather than 2012. Maybe back then no one was flying that fast down low.

Turbine Lancairs are a real thing now, but so is GPS with turn anticipation. Nobody flying an RNAV system would cross JAWBN in that turn onto V4. The navigator would see the steep turn ahead and start westbound miles beforehand to ensure rolling out exactly centered on V4. No overshoot required.

But, that early turn might take the aircraft out of protected airspace inside the turn. In fact, jets measuring speed in Mach sometimes start turning over 20 miles before a fix. You’d think a minimum turning altitude formulated in 2012 would take that into account. You’d be wrong.

The MTA assessment is strictly outside the turn. There is a raging debate in the community of mathematically minded cartographers behind our charts about how inside turns should be accounted for. Turn anticipation is factored into all RNAV approach procedures, as well as T- and Q-routes, and the protected airspace is plotted accordingly. However, the protected airspace for victor airways still assumes you’ll cross the fix before turning.

This brings up an interesting question: With turn anticipation, you never cross the waypoint. So at what point must you reach the crossing restriction? Bisect the angle formed by the two courses and call that your turnpoint?

Don’t look at me; that’s just my guess.

Can’t Get There From Here

If you were OCD about angles, you might have noticed a varying treatment for turn anticipation on approach charts. There’s a maximum-allowed angle for a turn from an airway onto a feeder or initial segment. Any turn over 90 degrees would be NA for an RNAV approach. The allowable angle is 120 degrees for a ground-based approach. My sources say the difference is due to turn anticipation.

Yet isn’t it perfectly legal to fly that 120-degree turn with your GPS, which will annunciate for a turn well before the fix? FAA references still talk about crossing a fix with ground-based navigation. Are we doing it wrong when we use RNAV techniques on Victor airways? There’s no definitive answer because the guidance is simply behind the reality.

Back to the RNAV (GPS)-A. If you were northwest-bound up V4-495, you’d cut off the turn between JAWBN and the mountains, but there’s no MTA for situations like that. Arriving on V4 eastbound, the approach transition is NA—it’d be nearly an about face to fly back to YAYUB. Reversals like that are why procedure turns were invented.

An arrival from V495 southbound (course: 130) would be a 146-degree turn. That should be NA, by the book, but the chart is mute. It turns out the chart is wrong and a NOTAM has been issued. But real world: This is an RNAV approach. You could arrive from any direction, not just the airways. Shouldn’t the NA be a range of radials, not specific airways? Again, the rules lag the reality.

You’re on Your Own

Rules commonly outlive their relevance. They have a foundational staying power, probably because new rules get layered on top of old ones like another tier of bricks. However, protected airspace is cast wide enough you can probably ride the airways for a lifetime and never end up in a bad neighborhood.

Someday design criteria will catch up. Until then, keep a mental picture of where the rocks lie whenever they’re higher than you are. And keep an extra nickel in the tank. You don’t want your only out being someone who’s offering nothing more than a sandwich.