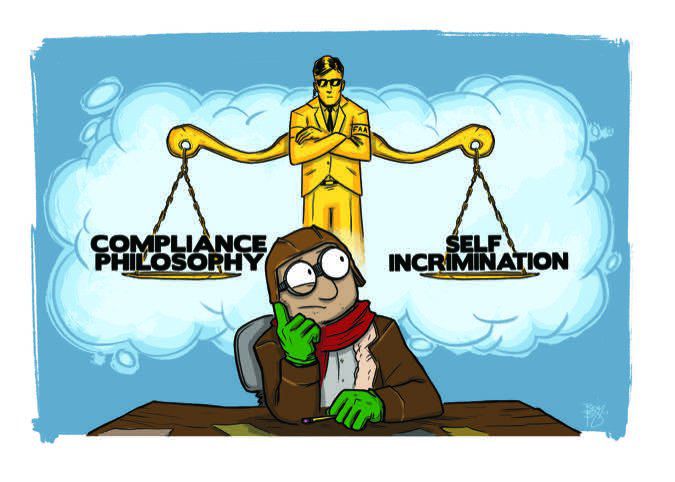 In the April issue of IFR, Fred Simonds wrote an article that did an excellent job of explaining how the FAA’s “Compliance Philosophy” program, started in 2015, seeks to encourage pilot compliance with the regulations through guidance rather than punishment. He also provided data that strongly indicated it has had the effect of reducing the number of pilot deviation events (potential violations) that turned into violation actions seeking punishment of pilots to nearly zero.

But, you’ll still want to be careful.

As an aviation attorney, the Compliance Philosophy—sometimes referred to as the kinder, gentler FAA—has meant my phone has stopped ringing with calls from pilots needing defence in a violation action. While I like making money as much as the next person, fewer FAA actions against pilots who simply made an honest operational mistake is, in my opinion, a very good thing.

Nevertheless, I regularly get questions from pilots about the Catch-22 of Compliance Philosophy. After violating an FAA regulation, to take advantage of Compliance Philosophy and get some remedial education instead of a certificate suspension, the pilot has to fess up to the violation—throwing him or herself on the mercy of the FAA’s bureaucracy—and hope that those who make the decision whether to be kinder and gentler will indeed apply the Compliance Philosophy. Because if they pursue a violation action, the pilot will not have a viable defense after she or he admitted wrongdoing, even if there was no intention to violate a reg.

As a result, when the FAA comes calling to discuss a possible pilot deviation, the age-old question of whether the pilot should respond still comes up. In the bad old days, responding to an FAA inquiry often had no upside for a pilot.

The FAA has historically been badly short of funds and inspectors usually didn’t have the time to pursue violation actions against pilots that those inspectors weren’t sure they could prove. Usually, by the time they contacted the pilot they knew they had the goods on him or her, the contact was just a formality they were required to complete.

There was little upside for the pilot in talking to the inspector. Pilots are usually pretty good, reasonably honest people and they tend to be spring-loaded to have a friendly talk with an inspector in hopes of casting a favorable light on themselves, admit they messed up, apologize for it, explain how they learned from the situation and point out that it won’t happen again. Unfortunately, in doing so, a certain number of pilots would dig a deeper hole for themselves by admitting something and turning a marginal case for the inspector iron clad, or admit to doing something even worse than the inspector knew about.

The good news is that, from the plain language of the FAA Order that established Compliance Philosophy (8000.373—your favorite search engine will find it fast), FAA inspectors and their supervisors are directed to follow its terms and avoid filing a violation against a pilot for incidents that fall within its matrix. The even better news is that, from what I’ve seen in the data and in talking with FAA inspectors, the Order is being followed. I recently had two FAA inspectors tell me over some adult beverages that they greatly disliked filing violations against pilots who had made honest mistakes. They said they were relieved that the Order gave them the legal authority to do what they felt was right—sit down with those pilots, talk about what happened and come up with a way to make sure it wouldn’t happen again.

They confirmed what I’ve heard from others: Often the event that brought the pilot to the FAA’s attention was a symptom of some shortcoming in the pilot’s education or understanding of his airplane or ATC, and arranging for him to get some focused ground and/or flight instruction would fix the underlying problem. They said that Compliance Philosophy often not only helped a pilot become safer, it turned him into someone who was more likely to follow the regs (which are mostly enforced under the honor system, anyway) going forward whereas, in the old days, violating the innocent-mistake pilot often turned him into someone with nothing but contempt for the FAA and regs and more likely to violate them in the future.

That’s a long way of laying the foundation for my opinion that if you get contacted by the FAA and asked to discuss a possible pilot deviation, the odds are that you can help yourself by doing so—with a few caveats.

First, under the Pilot’s Bill of Rights, the FAA cannot make any inference against you if you don’t respond, so don’t feel you have to respond or have to respond right away.

Second, before you respond, speak with an aviation attorney who understands Compliance Philosophy and get as much information as you can so that you can make the best decision as to whether you should respond. If you answer the phone and an FAA inspector asks you to talk with her or him about a situation, my suggestion is that you politely say that you can’t talk right then and ask for the inspector’s name and phone number so that you can get back to them. The inspector cannot use that against you and it gives you time to at least organize your thoughts. When you decide that you will speak with the inspector, you can put your better foot forward and not jam it in your mouth.

Third, the FAA has made clear that Compliance Philosophy is not for circumstances in which pilots intentionally violated the regs (think buzzing), falsified documents (including logbooks and applications for ratings), demonstrated by their actions that they were serious safety risks or failed to fulfill commitments to take corrective action. If what you did falls into one of those categories, talking with the FAA probably has no upside for you.

Fourth, if you do respond, make sure you keep the conversation polite and professional—you want to demonstrate that you made an innocent mistake and don’t want to do it again. Getting worked up, defensive or alleging that “the gummint is out to get you” will work against you.

Five, if you do work out a course of remedial training or are asked to take a “709” ride with the FAA so the inspector can assure that your skills are still up to snuff (take dual before you go), do what you have agreed to do in the time you agreed. Failure to do so will turn “kinder and gentler” into a suspension of your certificate.

Six, there is a chance that the underlying event proves to be an indicator that it’s time for you to stop flying—be it age or a physical condition. FAA inspectors are alert to that issue. If that proves to be the case, my recommendation is to be professional and accept what may be a terribly unpleasant fact with as much grace as possible and the recognition that the FAA inspector may have saved you from hurting yourself and others. The inspector may have allowed you to retire from flying with a reputation as a good pilot rather than one who ended his or her years in the sky with a tragedy.

Seven—and somewhat out of sequence—if you are contacted by the FAA about a potential transgression and you have not already done so, file an ASRS (NASA) report immediately. It will never hurt and it may help—filing an ASRS report is evidence of a compliant attitude on the part of a pilot.

As I explained in “IPC and ATC: We All Goof” in the July issue, I was recently getting an IPC in VMC and the controllers were saturated. I believe we were cleared for a practice approach, but the tower didn’t know we were coming. We got scolded more than once, but on each occasion I responded with humility and contrition, yet without an admission of any fault:

“Yes, I do know that I’m supposed to get a clearance. I honestly thought we were cleared for what we did, but if not I obviously messed up. Either way, I’ll be extra vigilant in the future to specifically listen for the clearance so that doesn’t happen again.”

My analysis of that event suggests to me that if (when?) I do something that is an obvious mistake, a little equivocal language can go a long way. For example: “I wasn’t aware of busting that airspace, but if you say I did, clearly I need to review my navigation and chart symbology. I’ll closely analyze today’s events and see what I can learn and do differently in the future.”

Choosing to respond in this way illustrates responsibility without directly admitting guilt. It’s honest and admits that it’s always possible to do better—all in line with the Compliance Philosophy. Nonetheless, if an inspector pursues a violation, that response doesn’t directly admit fault in a way that could be used as evidence. So, regardless of whether there was a violation or not, equivocal language along those lines seems like a “safe” response. It protects you under the Compliance Philosophy and, if it comes to it, in court later. —FB

The formal and informal evidence shows that the FAA’s Compliance Philosophy is working to radically reduce the number of pilots facing violation actions for innocent mistakes. While I continue to recommend that you contact an aviation attorney if the FAA wants to talk with you, the chances are that the right thing to do will be to cautiously talk with the FAA and you won’t have to pay that attorney to defend you in a violation action.

Rick Durden is an aviation attorney who holds a CFII and ATP and is the author of The Thinking Pilot’s Flight Manual, Vols. 1 & 2.