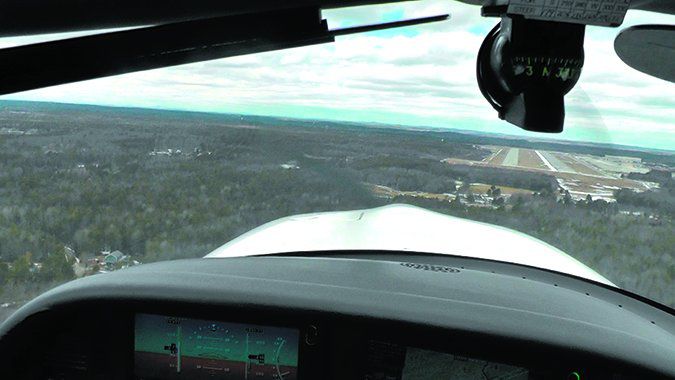 Perhaps we should cut right to the life-saving takeaway: If you’re engine-out in a typical single and gliding into a headwind of 15 knots or more, pitching down to at least 10 knots over published best glide speed will probably extend your glide range.

This is true down to short final. Holding best glide into a headwind on short final and see you clearly won’t make it? Pitch down and see if that improves things. Just remember to slow back to your normal procedures for the actual landing, using or shedding those extra knots as necessary.

A 20-knot headwind or tailwind for a gliding 747 makes for a rounding error, but for an engine-out single it can mean the difference between an on-airport landing and an off-airport tragedy. Glider pilots have charts and techniques for speed and loading to maximize their performance, including adjustments for wind. They call it “Speed to Fly”; for X headwind increase the indicated glide speed to Y for a new rate of descent of Z.

An aircraft has a single best glide speed for a given configuration. We powered pilots often call this Vg or Vbg. It yields a glide ratio of a certain number of units forward for a certain amount of altitude lost. A Cessna 172 might glide at 8:1, so it could go 8000 feet forward for each 1000 feet it lost at a Vg of 65 knots indicated (KIAS). Maybe at 75 KIAS, the ratio is 7.8:1. So glide the 172 too fast and you’ll only go 7800 feet.

But if there’s a 20-knot headwind, 65 knots in the air means 45 knots over the ground, so you only go about 5500 feet horizontally for each 1000 feet down. Glide faster so wind has less net effect.

Remember, these glide ratios are hypothetical, and you’re unlikely to find a “Speed to Fly” chart for a single-engine, piston GA airplane. So a friend and I decided to make one of our own.

We took out his Cirrus SR22 and conducted an experiment that would make a good scientist cringe (few repetitions and no real control group), but the results were nonetheless illuminating.

Starting from 5000 feet MSL, we pulled power to idle and made straight-line glides down to 2000 feet MSL. We did this at speeds from 10 knots below best glide speed up to 30 knots over best glide speed. We kept a video camera on the PFD for the descent to record the indications throughout. The recordings also let us check how well we held the speeds through the descent and look for aberrations (where we happened to pitch up just before a recording point, for example).

Indicated airspeed, true airspeed, and rate of descent were all pumped into a spreadsheet. We then added what that performance would equate to given different wind conditions. The spreadsheet confirmed what we saw anecdotally in flight. It also confirmed that our data collection wasn’t ideal. I have new respect for test pilots.

The gross-weight, published Vg for the SR22 is 88 knots. Corrected for our test weight it was about 84 knots. In raw data, our best still-air glide was up near 90-95 knots. But allowing for those variations, and applying some correction for pitch instability, it still appears that gliding five to 10 knots faster had a consistently miniscule effect on rate of descent. It was probably less than our margin of error in recording it. Even Vg + 15 knots resulted in only a modest increase in rate of descent. This means gliding faster into a wind would have a huge impact on range. By our numbers, gliding 15 knots faster into a 30-knot wind yields 20 percent more range.

In theory, you also benefit by slowing from best glide with a tailwind. You’ll sink slower at this speed with the tailwind making up the distance over the ground. However, our experience is that holding that speed requires a lot of attention and getting even just a bit too slow for a short time ruins any gains. It’s probably not worth it.

By massaging the data into trends to smooth out our experimental error and limited datapoints, we came up with curves for about how well the plane might perform in NM traveled for every thousand feet of altitude lost. The crest of the curve for still air is faster than the gross weight Vg of 88 KIAS for the Cirrus SR22. Presumably that’s still our experimentation error. But these trend lines are consistent, and look just like the published curves for gliders. For this Cirrus, a 20-knot headwind moves the best-case curve to Vg+10 knots. A 50-knot headwind moves it to Vg+20 knots.

These curves flatten as headwind increases as well, so adding only 15 knots into a 50-knot wind, it gets you almost as far as adding 25.

Again, this is an unscientific study by a couple guys in one airplane on a Sunday afternoon. You have to make your own PIC decisions if you’re ever engine-out and trying to make a field. But I know I’ll pitch down and glide faster if I’m engine-out into a headwind.

This brings us full circle to what I said at the outset. You can think of Vg as a range from a bit below the published speed up to, maybe, 20 knots over. This is a range inside of which you can pick the best speed for your conditions.

Remember that the best glide you quoted for your last flight review is probably too high. Published best glide is at gross weight. So the full analysis would be to calculate your correct Vg, which might be five knots less than published, and then add the correction for the headwind, which might be 10 or 15 knots more.

Some pilots use a rough rule to add half the headwind component to their corrected best glide speed. Our charts show that might be reasonable, if a bit conservative. All aircraft will differ. You might want to go out and get some numbers for your own bird.

You could do some tests in your own plane with a GPS and vertical speed required (VSR) to a nearby airport that’s upwind. Set direct-to on the GPS and show the VSR to reach that airport at pattern altitude. Now idle the engine and glide in that direction, noting your vertical speed. Will you make it? Now pitch down and speed up. Your vertical speed downward will increase, but the VSR will also increase with your new groundspeed. Which one increased more? Perhaps now you will make it.

The winds happened to be pretty good at the surface that day, so we took this to a nearby airport and did some power-idle glides straight in to the runway. We found a position over a landmark where we couldn’t reach the touchdown point holding best glide. We returned to that point at the same altitude and pitched down. The winds were steady and the result was consistently effective. Most importantly, the effect was easy to see and adjust for. We could tune for just the right speed to make it, or realize there was simply no speed that would bridge the gap.

A real eye-opener here was how counter-intuitive and counter-training this all was. We’re always taught to pitch for best glide and move on. That’s not bad, but it is incomplete and really falls apart on short final. How many pilots have tried to stretch a glide and pulled back despite their training otherwise? What if we actively trained our primary students to pitch down to “stretch” their glide? At least within reason, and until they must slow for the landing (on or off airport).

That’s how glider pilots are taught, and that’s what we are when the engine turns into so much forward ballast.

The flip side of needing every inch to reach that engine-out landing is having too much altitude. What do you do when you arrive 3000 feet over the airport?

The standard answer is to spiral down, but that’s harder than you’d think unless you practice. The best way is to start to learn the “high key” position for your craft. A good starting point is 1500 AGL and abeam the numbers, just a bit wider than a standard downwind.

Now make the 180-degree turn to final, adjusting speed and configuration to hit a “low key.” Some people call that the 90-degree point, others consider it a point where you roll out on short final. The point is more to have a how-goes-it through the turn and know how to adjust as you descend.

Again, there’s a lesson from glider pilots here. They fly their patterns with partial spoilers extended. This means they can descend faster (more spoiler) or slower (less spoiler) the way we would use a throttle. You need to practice your 180s with speeds and drag such that you can add or lose vertical speed in that turn. Maybe you’ll adjust airspeed, bank angle, or configuration; maybe your technique has a slight slip in your standard 180 you can increase or decrease. The point is that you know how to adjust.

Once you have a high key target for your aircraft, the next step is learning how to spiral down, watching how much altitude you lose with each 360. Varying bank angle and speeds can make huge differences you can apply to hit your high key target and continue as planned.

Finally, take the exercise one step further and pretend you’re in IMC. With a safety pilot watching and making any traffic calls, approach the airport using the GPS map and find the right spiral-down and high key using just the map view.

Do this for an afternoon and you’ll appreciate how hard it is to do it consistently — and how glad you are the first time you try isn’t engine out with one chance of success.

Jeff Van West once watched a Cessna 210 he was sitting in glide short of a runway and into a Little League baseball field. He wishes he knew enough back then to suggest pitching down.