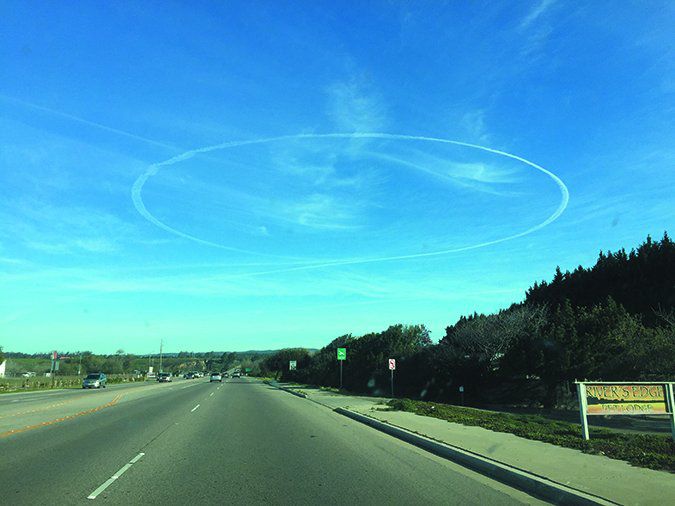 We flew N123CT to Dallas to visit friends on New Year’s Eve. Looking over the en route charts, I noted the MEEOW intersection southwest of Little Rock. As it happened, on New Year’s Day, we flew from Dallas to Little Rock with four feline-loving passengers aboard for a short day trip. Though off the direct route, it was possible to overfly MEEOW inbound to KLIT. So I requested routing “Present position, direct MEEOW, direct.”

After phonetically spelling MEEOW to a puzzled center controller, he obliged the request and I informed our passengers of the new routing. The passenger in the right seat coordinated a countdown, and at MEEOW, a loud “MEEEEOWWW” comes from all aboard. Happy New Year!

I was driving along and saw this interesting contrail (photo). It looks like someone got a penalty vector.

I’d picked up a friend of mine from San Carlos for a day of adventure. On the return, the winds reported were 27 to 34 knots, 40 degrees off the runway heading. I explained to my friend that we would attempt to return to San Carlos, but that if it was too squirrely, we’d pick another local airport and he’d need to find transportation back to San Carlos airport.

I also explained the difference between a tricycle and tailwheel landing-gear configuration and why I felt comfortable attempting the landing in the Mooney Ovation we were flying, but would never attempt it in the Cessna 170 I sometimes fly.

The landing was challenging, but on centerline and controlled.

On my departure after dropping off my passenger, with my handoff I got a traffic call:

I don’t know what happened to the 170, but an acquaintance of mine ground looped his 180 attempting to land at Concord that same afternoon.

A common trip for me and my Grumman Tiger was between Bedford MA and the Philadelphia area. I always received exceptional service from the New York controllers, no matter what was going on. But you have to respect how busy they are and work with them.

On a particularly busy Friday night when it was hard to get any time on the frequency, I heard the following:

Then there was a flurry of activity with other aircraft.

NY Approach: “Cirrus 1234, none of that is going to happen. Squawk VFR, frequency change approved.”

Please send us your cleverest or most embarrassing moment on the radio—or your favorite fix names or airport names—with a subject of “OTA,” to IFR@BelvoirPubs.com. Be sure to include your full name and location.