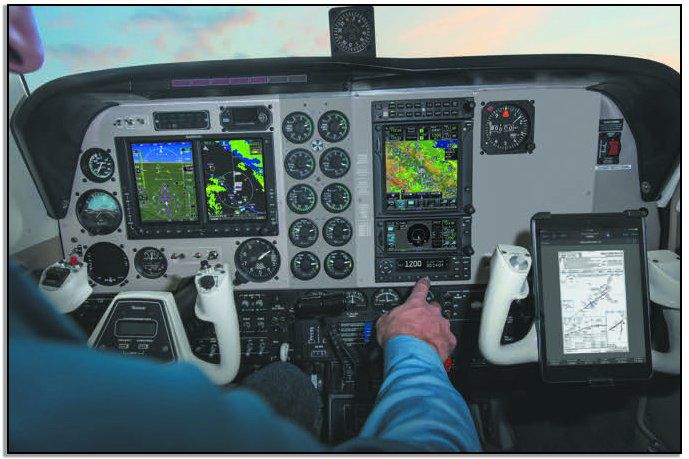 But, situational awareness is supplemental to the primary tasks of instrument flying—maintaining course, altitude and airspeed. For that, you need to be constantly cross checking your three primary instruments. It doesn’t matter whether those three are discreet instruments each more than three inches from its closest neighbor, or whether they’re clustered together over a background of a synthetic view of the ground on your primary flight display. You’ve still gotta keep an eye on your heading, your altitude and your airspeed. Of course, including attitude in that scan will help you keep the other parameters in check.

“But they’re all right there on one instrument,” you might argue, saying no scan is required. “Nonsense,” I say. One instrument or multiples, you’ve got to keep those eyes moving.

Where’s This Coming From?

As I’ve written separately, I recently had a challenging IPC in my airplane. Things were happening so fast at multiple points that I didn’t take even more time to add the autopilot into the mix. Now, my aging autopilot is fully coupled; it’ll fly an approach all the way from the IAF to the ground with me only handling the power, gear, flaps, etc. So, to make sure I’ve got enough concentration for other chores, I usually let George handle the mundane tasks.

My results while hand flying were less than exemplary. Sure, there are a number of reasons and even a few excuses I could claim, but the bottom line is that my scan sucked. I’d be given a heading, for example, and as I was turning, watching the HSI for the rollout, my altitude would wander. Add splitting my attention between that big, sweet PFD and the view outside during the circle to land and, uh, that didn’t work out too well.

In a personal post mortem of the session, I realized that I’d become so dependent on the autopilot, and so complacent with all that information in front of me, that I’d completely lost my scan. Sure, an EFIS PFD scan is easier to master with all the information in one place, but you still can’t afford to fixate on, to use the same example, the heading while in a turn. Keep those eyes moving, watching altitude, attitude, speed, and, of course, heading.

With all that information in one instrument—but not in one place on the instrument—it’s easy to think that you’re scanning when you’re not. Those of us fortunate to have TAA should simply hand fly more often, perhaps even in all but the most strenuous or boring situations. Let’s face it. Even if you file IFR on every flight, the amount of time you spend in actual IMC is minimal. I happen to fly mostly “out west” so I even get less IMC than those of you east of Ol’ Man River. As a result, even while hand flying in VMC, I’ve found that my scan tends to get sloppy very quickly. So, real hand flying in real IMC might not happen enough to keep your scan sharp.

Discipline is the answer. First is the discipline to hand fly as we just discussed. Next, though, is the discipline to force yourself to scan around that PFD, seeing all the data it presents and using that to formulate your status relative to where you should be. Keep those eyes moving: airspeed, outside, attitude, heading, NAV, altitude… Cover ’em all every couple seconds. Keep doing that. You know, just like you had to learn to do when you worked on your instrument rating with the steam gauges so many years ago.

Sure, this is obvious and is a simple fix. But if it didn’t occur to me until it rudely smacked me upside the head, well, it might just sneak up on you, too, even if you are an ATP with thousands of hours. Don’t let your reliance on the autopilot and a false assumption that EFIS doesn’t require an instrument scan cause you to lose your proper scan. Work on maintaining that hard-earned scan, not on relaxing while George flies.

Frank Bowlin now tries to stay so engaged in each flight that he not only maintains his instrument scan, but he no longer has time for his nap.