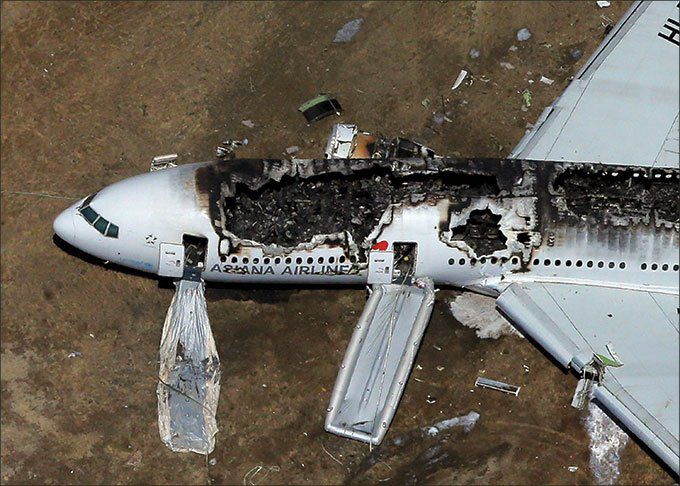 Early July saw a fiery crash of an Asiana B-777. That was followed by Southwest’s unsuccessful nosewheel landing and a UPS flight hitting the ground. While the NTSB grinds toward its final reports, lessons for us are emerging.

Automation was Asiana’s undoing. An unstable approach collapsed Southwest’s nosewheel, and both factors got UPS. These traps can also bite any of us. Bad decisions can produce accidents. Understanding how bad decisions can seem to become acceptable will help us recognize and correct questionable choices. Additionally, adding a stabilized decision altitude to each approach will ensure all is going according to plan.

Asiana 214
The City by the Bay was enjoying sunny skyies with tranquil breezes on July 6, 2013 when Asiana 214 slammed into the seawall short of SFO Runway 28L. This was a training flight with an instructor in the right seat, student captain in the left seat, and the first officer in the observer’s seat. Many training accidents occur during the landing phase, and in this case they simply got too low and too slow. How? Evidence points to the pilots being behind the approach from the beginning and tripping on an automation quirk that made matters worse.

Flight Level Change, labeled FLCH or FLC, in planes without auto-throttles, will pitch the airplane to maintain the selected speed in either a climb or descent. On aircraft equipped with auto-throttles, FLC will also command idle for descent or maximum thrust for climbs—combining a pitch mode and a thrust mode into one button. FLC is also called pitch on elevator because the autopilot uses pitch to control airspeed. FLC is the easiest way to descend or climb at a given speed.

Asiana 214 started the approach high, descending in FLC. Prior to the FAF, a 1000 foot per minute descent was selected, probably to reduce the descent rate and to enable setting the altitude pre-select for the missed approach. Still high, FLC was again selected, commanding pitch and power for a climb to the missed altitude. The captain recognized the error and turned the autopilot and his flight director off—typically a good decision when automation gets in the way.

There were a couple of decision points where the tragedy could have been prevented. The initial switch from FLC to a 1000 fpm decent was one occasion. When they recognized that descent wouldn’t work they should have gone around. Once the climb was inadvertently initiated by FLC, they ought to have gone with it. Being a training flight, perhaps neither the student nor his instructor wanted to risk looking bad to the other. Finally, checking that they were stabilized would have told them something was wrong.

UPS 1354
The circumstances surrounding the accident of UPS 1354 in Birmingham are surprisingly similar to Asiana. Both crews got behind the aircraft and tried to save the approach by diving towards the ground.

The saying about the road to hell being paved with good intentions is a good synopsis of this accident. The captain briefed the approach 20 minutes out and prepared for arrival. Yet, all of the preparations vaporized at the final approach fix and bad decisions paved the path to the ground short of the runway.

UPS uses two methods for non-precision approaches, with “profile approach” being preferred where the crew follows an FMS generated glideslope. This is similar to the VNAV capability found in a typical GPS navigator.

The second method uses vertical speed. The crew selects a vertical speed, adjusted for groundspeed, to align the vertical descent with the angle planned on the approach chart. The industry refers to these types of approaches as constant descent final approach.

ATC instructed UPS to maintain 2500 feet until established and cleared them for the localizer approach. The crew intercepted the final on a segment with a minimum altitude of 2300 feet, but maintained the higher 2500 feet, which isn’t uncommon.

They reached the final approach fix 200 feet high and the captain realized the autopilot was not going to capture the armed vertical glidepath. The 3.28 degree angle for the approach is a bit steep and starting higher didn’t help.

The captain initially selected a normal vertical speed of 700 fpm, but soon realized he needed more, and selected 1500. The first officer made a standard 1000-foot call as they descended at 1500 fpm until the enhanced ground proximity warning system shouted, “SINK RATE, SINK RATE.” At that point the captain reduced the vertical speed and called the airport in sight, seconds before impact. Approach minimums were never called and the reported ceiling was 200 feet below the MDA.

The Airbus 300 requires three familiar steps to fly a profile approach: load the approach, activate the approach, and sequence the flight management computer (FMC). The crew skipped the last step—the computer was still navigating directly to the airport—so the armed vertical glidepath wouldn’t capture but it did offer multiple cues the crew missed.hearing, company representatives argued that the crew made many wrong decisions and violated procedures. They assert procedures require an approach brief, eliminating the possibility of changing from a profile to vertical speed approach. Also, UPS stable approach criteria forbid vertical speeds greater than 1000 fpm below 1000 feet AGL. The crew omitted a 500 foot call that requires stating vertical speed. Finally, they didn’t react to reaching minimums and, not yet seeing the airport, miss the approach.

Although not ideal, it is not uncommon to intercept a glideslope from above, and a higher-than-normal vertical speed to do so is prescribed by UPS procedures: “…and the VNAV path crosses the FAF below the FAF minimum altitude, at the FAF select V/S-1000, then arm PROFILE mode.”

The downside of a high vertical speed is the time compression from the non-routine procedure. A typical approach path descent rate is 700 fpm. At 1500 fpm things happen in half the time, pilots get behind and miss prescribed calls. The crew also thought the weather was above minimums, creating an expectation that they would see the runway before MDA. Finally, it was 4:50 in the morning, with the potential for fatigue befuddling the mind and narrowing the senses.

Southwest 345
La Guardia is a challenging airport with somewhat short—by airline standards—runways, lots of traffic, and dense airspace. Southwest’s mid-July approach to LGA destabilized and resulted in some spectacular videos, nine injured passengers, and a broken 737. Less than 400 feet over the lights of Queens, the controls were transferred and flaps changed.

We’ve already dissected this accident in some detail in “The Vis” in the December 2013 issue.

It is unorthodox in airline flying to take the controls away from another crew member. Also, increasing a flap setting during the last minute suggests some uncertainty. The NTSB revelations point to a plane being forced down, as indicated by the nearly identical approach and touchdown speeds. Transferring controls and changing flaps were obvious decision points.

Lessons to Learn
These accidents draw attention to bad decision making and unstable approaches, common accident factors we should long ago have learned to avoid. Pilots are conditioned to push limits on approaches, but somehow the line gets blurred between the meteorological limits of an approach and the judgment limits on good technique and procedure.

Each accident presented the pilots with multiple decision points. When the Asiana pilots decided 1000 fpm wouldn’t work, or the captain of Southwest took control, or the UPS pilots didn’t intercept VNAV, a routine go-around would have averted catastrophe. But, even after that, each crew had more opportunities to avoid their accident.

But, if you successfully get outside the norm often enough, it becomes the new norm. This process is referred to as the normalization of deviation, or operational drift, and explains why everyone drives 10 MPH over the posted limit on freeways. In aviation, this type of conditioning causes some of the most frequent and seemingly inexplicable accidents. For the instrument pilot, it encourages continuing unstable approaches.

Bad habits can be reset in a flight review, validating the FAA’s requirement for them. Pilots frequently evaluated exhibit less operational drift. Another option is to have a friend review data downloaded from a GPS, similar to airline Flight Operations Quality Assurance (FOQA) programs that review flight data to identify operational abnormalities.

While flight reviews, IPCs, and Wings seminars can identify bad habits, a procedure is needed to improve decision making on every approach. A stabilization check should be a part of your approach routine, even on visual approaches and good days. The check counters needle fixation and improves situational awareness.

Many pilots call out altitudes to minimums. A great place to add a stabilization check is at the 500-foot call. It would sound like, “500 to minimums, stabilized.” The “stabilized” part gets you to compare your configuration, speed, power and navigation with where they should be. If something is wacky, miss or go-around right then and figure out why later, when you have more time.

For a typical Cessna 172 on an ILS, a stabilized approach might be 80 KIAS, on localizer and glideslope within a dot or two, a 500 fpm descent, and 1800-2100 RPM. Personalized limits can be developed based on experience, aircraft type, and your skill level. The instrument practical test standards is a good start, requiring less than 3/4 -scale vertical and horizontal deviations and airspeed within 10 KIAS. Add vertical speed and power limits as appropriate.

Fortunately, the spate of airline pilot mistakes last summer resulted in only a few fatalities. Mistakes happen; the traps that caught these pilots—quirky automation, and unstable approaches—can also ensnare you. Making safety minded decisions is always a good idea, although sometimes it is a challenge to shuck peer pressure and recognize normalized bad decisions. By intentionally making sure everything is how it should be, the chances of something slipping through the cracks is reduced.

Jordan Miller flies for a major U.S. airline and does his best to remain stabilized on all his approaches. When he isn’t stabilized, though, he reminds himself it’s OK to go around.

The airspeed is not more than VREF + 20 knots indicated speed and not less than VREF;

The aircraft is in the correct landing configuration;

Power setting is appropriate for the aircraft configuration;

All briefings and checklists have been conducted;

Specific types of approach are stabilized if they also fulfill the following:

ILS approaches must be flown within one dot of the glide-slope and localizer;

Circling approach wings should be level on final when the aircraft reaches 300 feet above airport elevation; and,

Unique approach conditions or abnormal conditions requiring a deviation from the above elements of a stabilized approach require a special briefing.

The advantages of a procedure must be balanced against the costs. In this case, a couple of criteria can be easily implemented without much training or mental energy.

Additionally, these criteria are designed for transport airplanes and need to be modified for GA use. For example, you could combine a stabilized check with a call out you already make instead of making a separate call. Also, GA approaches are often flown above landing speed and not at full flaps. Keep in mind that changing configuration after popping out of the clouds at 200 feet might not be a good idea. Just make sure you check your POH for approach procedures and landing performance. —JM