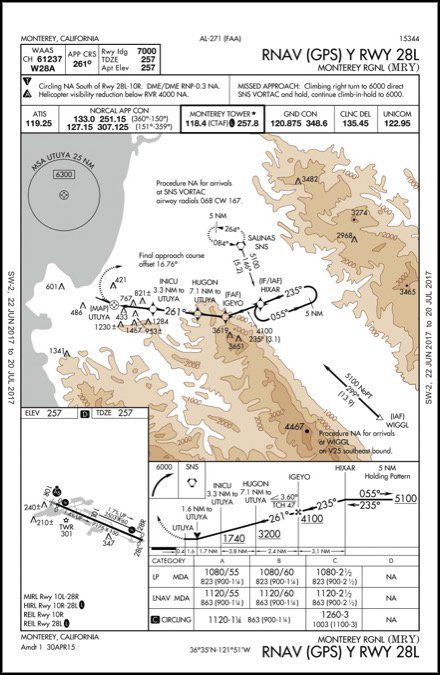 There’s little that’s more essential to an instrument pilot than the approach clearance. We controllers issue them all day long. I fully expect much of my frequency time to be spent issuing approach clearances for either training flights or weather-related needs. Approach Clearance, ATC Notebook, Tarrance Kramer, TAA, PTAC, IFR Magazine, The Terminal Arrival Area makes approach clearances simpler. Intercept vectors that are closer to the FAF have to be shallower. With no associated runway, this approach has only circling minimums. Tarrance Kramer

This question has a short answer and a long one—an article long, in fact.

The short answer is that, by the book you’re required to fly the hold in lieu of procedure turn (HILPT), even though it’s only an 89-degree turn. Understanding why will take a bit of background.

The 90-degree limitation for turns using RNAV as the navigation source appears in several AIM references. What they all boil down to is that controllers can’t give an aircraft direct to an initial or intermediate fix using RNAV if the turn to the subsequent leg will be greater than 90 degrees.

The reader’s question was about published procedures, but the approach designers have the same restriction that no turns can exceed 90 degrees. We see this restriction all the time, even if we don’t realize it, when we see a transition route on an approach chart marked “Procedure NA for arrivals on…”

For example, both the RNAV (GPS) and ILS approaches to Runway 35 at Concord, NH (KCON) have published transitions from the CON VOR. Those routes are 161 degrees and 153 degrees respectively.

Seven radials off CON correspond to airways, and four of them (V141, V93, and V39 northbound) are forbidden as arrivals because the turn to 161 would be more than 90 degrees.

However, only V141, is NA for a transition to the ILS approach. That’s because conventional navigation approaches are allowed a 120-degree maximum turn.

The difference in allowable turns is historical. Before RNAV, it was assumed you’d cross a fix completely and then turn back to intercept the outbound course. This overshoot gets accommodated by a larger protected airspace after the potential turn than before it. TERPS-protected airspace still has overshoot protection.

RNAV systems anticipate the turn. Turn anticipation uses your current groundspeed to initiate a (roughly) standard-rate turn that lets you roll out perfectly on course for the next leg. You never actually cross the fix, which means you’re turning into the airspace before the fix. Some GPS navigators even give you a countdown as the turn approaches and show the arc on the map.

The more acute the angle between your inbound and outbound course, the greater the number of degrees to cover, and the earlier you must start a standard-rate turn. Another way to think about it is imagining the turn radius of your airplane as a circle. As the angle made by the inbound and outbound course gets smaller, that circle can’t fit between them close in to the fix. You have to start the turn further out.

The astute reader will say at this point, “Wait, I use GPS for en route navigation on airways and often make turns over 90 degrees. Is this … bad?”

Probably not. Isn’t that reassuring? The standards currently lag the technology, but protected airspace is quite conservative for all but the fastest aircraft. That said, it’s a subject of real discussion among the people who make the standards and will probably change at some point.

As if the 90-degree limit isn’t bad enough for those of us not flying by Mach number, sometimes it appears legal turns are NA as well. The RNAV (GPS) Rwy 35 to Montpellier VT (KMPV) has a transition off the Burlington VOR on a course of 142. The chart has a restriction for arrivals on radials 051 through 231 clockwise.

Wouldn’t 90 degrees left and right of 142 be 052 through 232 clockwise? It would, if we were comparing apples to apples.

You’ve probably noticed that GPS course guidance is often a degree or three different from the courses shown on the chart. The reason is the magnetic variation used by your GPS, the chart designer, and the VOR defining an airway may all be different. If you program the course BTV to XIMKY in a GPS with a database and date as of this writing, the course appears as 141, not 142, so the restriction of 051-231 is correct.

Approach designers calculate to the fraction of a degree. This means a transition route might start at 141.4 and end at 141.2. The whole route appears as 141 on the chart, but those tenths of a degree measured at the actual turning fix might be the difference between a legal 89.9-degree turn, and a forbidden 90.1-degree turn. If the you see a published transition you think should be legal, or at least marked NoPT because the angle appears to be less than 90 degrees, the reason probably lies in decimals of magnetic variation.

(As an aside, the definition of Procedure NA arrivals at BTV is by quadrant rather than specific airway radials. I don’t know why some charts call out airways and others don’t. It almost seems at the discretion of the procedure designer.)

Back at KMRY, it turns out the transition from SNS to HIXAR is less than a 90-degree turn, even to the first decimal. But, the HILPT is required because the leg from HIXAR to IGEYO is too short.

You don’t have to cross directly over IGEYO because it’s a fly-by waypoint, not a fly-over waypoint. This means you could turn west before HIXAR and not make it all the way back on course before passing IGEYO. However, there is a maximum fly-by distance approach designers will allow. Turn anticipation for a fast aircraft approaching HIXAR could be far enough away and with a large enough turn radius, the aircraft couldn’t get established enough on the HIXAR-IGEYO leg before it had to start the next turn to UTUYA. Solution: Fly the HILPT.

What’s a pilot supposed to do when flying the SNS transition to HIXAR, or a similar situation, at speeds where that HILPT isn’t remotely necessary? The options come in varying degrees of acceptability.

A vector removes the issue entirely. Getting cleared over SNS and then for the approach doesn’t prove vectors are unavailable. It may have just been for convenience. Simply requesting vectors onto the approach course may be enough.

You could also request a vector to the fix where the HILPT is shown and a “straight-in” approach. The published route’s angle might be technically over 90 degrees, but the controller’s scope isn’t tracking to the tenth of a degree. If the controller is willing to give you the vector and the straight-in clearance, you can skip the hold and turn inbound.

While procedurally incorrect, your response to, “Cross SNS at or above 5100, cleared for the RNAV (GPS) Rwy 28L approach at Monterey,” could be to request a “straight-in” approach from HIXAR. This clarifies you won’t do the procedure turn. It really doesn’t make it any more legit to skip it, since you’re flying the published route, but you got it on tape that some controller ok’d it. Odds on, that’s what the controller expected anyway.

A bit further afield might be getting close to HIXAR and then requesting, “heading 205 to intercept the intermediate approach course.” This is a legal 30-degree intercept inside the intermediate fix. Whether the controller can approve something like that or not in any specific case would vary. There’s no rule that you can’t ask.

Which brings us to the last option of asking for forgiveness rather than permission. I personally would fly a quick teardrop-like turn and head back inbound rather than ignoring the rules. It’s a difference of a couple minutes.

Will some committee that counts to the tenth of a degree add some allowance for sharper turns in slower aircraft? Unlikely. So try the legit hacks, and practice quick HILPT reversals.

Jeff Van West once learned that aerial survey pilots (think: Google Maps) fly to a tenth of a degree all day. That was the day before he quietly withdrew his application.