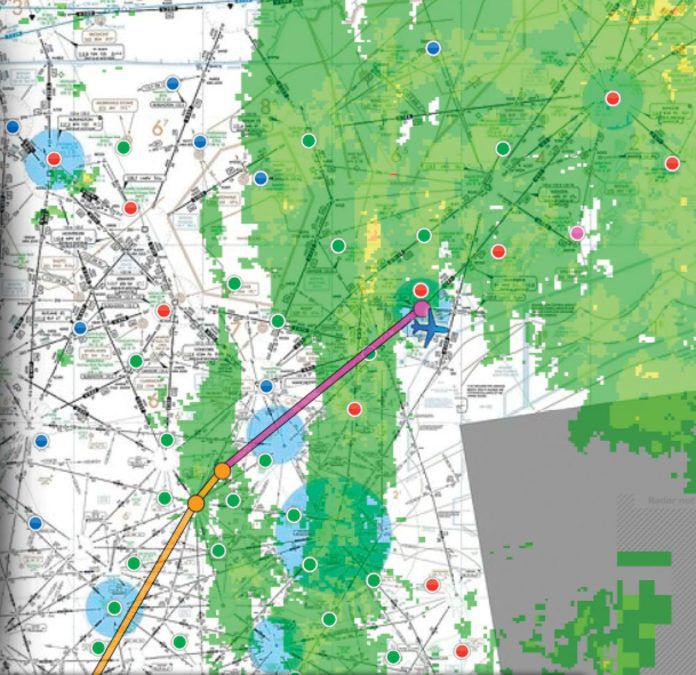 Free weather right on your iPad with a bonus of WAAS GPS position. But it’s not the slam-dunk against XM weather the marketing hype makes it out to be.

ADS-B weather for the iPad has been around for a while, but this is the first year pilots get some real choices. Baron released its Mobile Link with XM weather for the iPad. SkyRadar, which puts ADS-B weather into WingX on the iPad, just released a new device. FreeFlight Systems is promising an in-panel, complete ADS-B solution (traffic and weather) that will wirelessly send data to the iPad.

But the hot item this spring was the Stratus, an ADS-B receiver that was a team effort from ForeFlight, Sporty’s and device manufacturer Appareo. Even at $799 a pop, these things were flying off the shelves. It wasn’t that easy to get one for review, but get one we did. Is it the right way to go for iPad weather? We’ll give that a rousing “Maybe.”

The Highs
What the Stratus does well, it does very well. This unit really is portable. With internal ADS-B and GPS antennas, WiFi to the iPad and a long-lasting battery, you really can just toss the box up on the dash and go fly for several hours without a single cable in your way. Compare that to the Mobile Link system for XM weather iPad that’s two boxes and at least four wires; it’s only portable in the sense it doesn’t require a 337 form.

(Full disclosure: We had a problem with the internal ADS-B antenna on the unit we tested. This was fixed with the optional, external, ADS-B antenna, but the problem was traced back to the high-voltage testing that was done on the developmental unit we were loaned.)

The other thing Stratus does exceptionally well is seamlessly integrate weather data from ADS-B into the weather data you already know how to use in ForeFlight. When you view airport information in ForeFlight when connected to the internet, you can view METARs and TAFs along with their age. Go to the same screen three hours into your flight when connected to a Stratus, and you’ll see the latest METARs and TAFs is the same spot, but the time stamp will have have an additional “ADS-B” after it so you know it’s from datalink.

When you’re connected to the internet, NEXRAD, PIREPs, TFRs and lightning can be charted on the moving map. In the air via Stratus, PIREPs and TFRs work the same way: just like on the ground, you can tap the map icon for either and get a pop-up window with details. But lightning doesn’t come up at all—ForeFlight won’t even let you try to show it—because lightning isn’t part of the FAA’s ADS-B dataset.

NEXRAD through ADS-B is a bit limited compared to internet radar for ForeFlight. It won’t animate, and it’s lower resolution. In fact, it’s two resolutions: a low-res image for the entire U.S., transmitted on 15-minute intervals; and a high-res image for roughly 250 miles around your position that’s transmitted every 2.5 minutes (but only updated every 5-10 minutes). It also lacks niceties you might be used to from XM, such as cloud tops or storm-cell movement. It still gets the job done, however, and has the added bonus within ForeFlight of overlaying directly on en route charts with your route and other weather data.

AIRMETs and SIGMETs also paint on the chart. We’ve found watching Convective SIGMETs en route a huge help in strategic planning when the thunderstorm machines are really cranked up. Tapping the C-SIGMET box to see the details helps picture the movement and intensity.

The status of the ADS-B weather appears all the time in the upper left of every map page, so you can see it change color if reception is lost for any length of time. It’s color-coded just like the timestamps on weather data, so it turns red when it gets old. Missing NEXRAD is made absolutely clear with hashmarks over the map area where the data hasn’t been received recently. There’s no risk of seeing old images and not knowing it.

Details on ADS-B and GPS reception, as well as the Stratus battery level are just a tap away. Having the Stratus provide a rock-solid GPS position for the iPad is a plus. And, of course, a big plus of any ADS-B weather is that once you pony up for the receiver, the actual data is subscription-free (and available in Alaska, which XM is not).

The Lows
The biggest issue we see with any ADS-B weather, Stratus or otherwise, is that you usually have to be airborne to get it. If you’re in mountainous country, that could be many thousands of feet. But for most of the country, it’s at least pattern altitude. Remember, that’s just to start receiving the data; there will be a lag of many minutes from then until you have all of it.

We can’t tell you how many times we’ve started to formulate a plan for working around weather while still on the taxi out to the runway and looking at an XM NEXRAD image. This simply isn’t possible with Stratus (but may be possible with a 3G signal to your iPad). If you’re regularly flying out of a mountainous area, neither cell nor ADS-B coverage is likely for the beginning or end of your flight. To be fair, receiving XM on a portable can be a problem if the XM antenna can’t see the southern sky.

The other issue is that ADS-B is an FAA service. Originally, it was going to be the carrot to tempt GA pilots to equip with ADS-B traffic services required for virtually all aircraft by 2020. Several technical and regulatory boondoggles have made that unrealistic. (And, no, Stratus does not make you ADS-B compliant).

This means there’s always the lurking possibility a future budget ax will cut ADS-B weather. Or it could get privatized with fees for services formerly free. WSI is the company providing ADS-B weather now. They also have a fee-based service for certain certified receivers on the Iridium satellite network.
But even if it doesn’t, don’t expect any development of new ADS-B weather products. We would also expect XM weather to push out some of its additional products, such as icing forecasts, to widen the gap between the two services.

The Verdict
We think Stratus is a great product that was well conceived and executed. It’s a terrific option for a VFR pilot, where this weather data is supplemental to the view out the window. The $799 pricetag isn’t unreasonable for adding weather to a cockpit that didn’t have it. There are ADS-B systems for other iPad apps that are even cheaper, such as the ones from SkyRadar.

For serious weather flying, however, we think Stratus (and ADS-B in general) is wanting compared to XM weather. That’s “wanting,” not “unacceptable.” Stratus working through ForeFlight covers the critical items. But the extra data from XM, and availability from the ground up, might be worth the monthly fee.