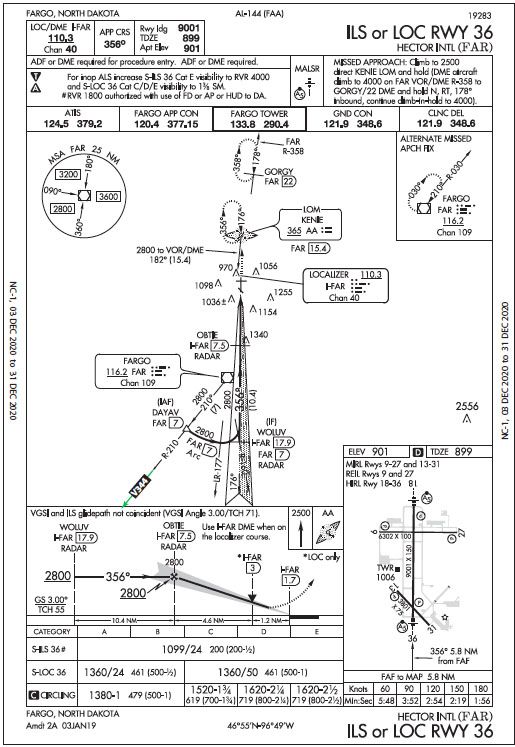 With full RNAV equipment, the occasional ILS might seem quaint, but it’s still a useful procedure. It even requires RNAV in some updated versions. Meanwhile, there are still plenty of ground-based navaids to accommodate the full spectrum of aircraft capabilities, all the way down to “legacy” avionics, of which, yes, there really are lots. Some are newly acquired, waiting for avionics makeovers. Until such time, new owners might need refreshers on VOR, DME and LOC.

A few weeks back, you found a cherry Piper Cherokee 140 for sale. Efficient and user-friendly, it’s perfect for your two-hour commutes to visit friends and relatives from your home in the Twin Cities. This beauty came with a new interior and paint, and even new replacement vacuum-driven AI and DG, but only one VOR/LOC receiver with CDI (no glideslope). It also has DME, however that works.

You’ve been flying a club Archer with a retrofitted glass panel and coupled IFR GPS. But, wanting something to call your own, you jumped on the Cherokee despite the six-pack. So until the upgrade, you learn to use what’s there, backed up with a tablet GPS and its full-featured electronic flight bag.

Fargo, North Dakota, will be a frequent destination, and Hector International has RNAV approaches, plus ILS or LOC procedures for Runways 18 and 36, plus a VOR 36. The ILS/LOC approaches are similar in their requirements and components, with the 36 approach having lengthier notes and a few more elements to study.

So start at the top of the ILS or LOC 36 chart: “ADF or DME required for procedure entry. ADF or DME required.” Sounds a bit redundant, but it’s telling you two different things. First, it’s specifying what’s laid out on the plan view: Need DME to navigate to the only initial approach fix, DAYAV (7 DME from the Fargo VOR/DME, on R-210, and fly the arc to WOLUV.

That’s right, a DME arc. But before tackling that, the note also states ADF or DME must be available to enter and fly the procedure. Wouldn’t the title say “LOC/DME” to make it clear? Not since ADF would suffice in lieu of DME.

And : “The FAA has initiated a program to provide a new notation for LOC approaches when charted on an ILS approach requiring other navigational aids to fly the final approach course. The LOC minimums will be annotated with the NAVAID required (e.g., ‘DME Required’ or ‘RADAR Required’).” This is a good reminder to read the whole chart and inventory required equipment.

Now, back to the arc. While it isn’t much of one—less than 50 degrees in a gentle left turn—there are a few components to get familiar with. Keep a 7-DME distance from FAR while crossing the 210- and 177-degree radials to guide you along the arc until the localizer. Arcs require constantly tweaking the heading to nail the DME.

Meanwhile, for extra guidance, preset the upcoming VOR radials as you fly the arc. (The textbook “turn 10/twist 10” is a good way to learn, but varying adjustments are often required for winds.)

What does “LR-177” between the arc terminals mean? It’s a lead radial—more guidance, perhaps, but with a specific purpose. The Instrument Procedures Handbook explains, although it doesn’t mention “lead radial” for those who do a keyword search: “When joining a course at or before the IF, the angle of intersection of the arc and the course is designed so it does not exceed 120°. When the angle exceeds 90°, a radial that provides at least 2 NM of lead will be identified to assist in leading the turn on to the intermediate course.”

Meanwhile, the Instrument Flying Handbook gives a more open-ended definition, using the actual term: “A lead radial is the radial at which the turn from the arc to the inbound course is started. When intercepting a radial from a DME arc, the lead varies with arc radius and groundspeed.” Got it.

Spoiled by GPS approaches with rock-solid fixes and even advisory glideslopes, you missed the time table tucked into the bottom corner of the approach chart. It helps to know it’s 5.8 miles from OBTIE to the MAP, and you’ll use that for going missed if need be. But be sure to time the approach starting at OBTIE and interpolate for your actual groundspeed.

If timed approaches weren’t enough, the “ADF or DME required” note applies to the missed approach as well with two sets of instructions. The simplest, “Climb to 2500 direct KENIE LOM and hold,” is reserved for those with RNAV or, (yes) ADF, to identify KENIE. The rest of the instructions are for aircraft like the Cherokee without ADF: “(DME aircraft climb to 4000 on FAR VOR/ DME R-358 to GORGY/22DME and hold N, RT, 178° inbound, continue climb-in-hold to 4000).”

So hold north of GORGY on the FAR R-178, right (standard) turns. So why, if KENIE is identified on the plan view as 15.4 DME from FAR, is GORGY reserved for DME aircraft? Couldn’t you hold at KENIE? Probably, if you asked in advance; you’ll be in radio contact and on radar throughout so there’s no danger of misplacing your location. But the LOM’s primary identification is as an outer marker, with DME just a way to confirm. And in the case of lost radar or lost comms with no amended instructions, you must follow what’s published.

You’d expect to reach 4000 feet well before GORGY—it seems several miles out. Just to confirm, figure the distance from the MAP to GORGY. Here’s where you realize you fell into the common navaid name trap. In skimming approach, you assumed the DME fixes were from FAR, the VOR, but these are distances from I-FAR, the LOC/DME. Then KENIE and GORGY are marked at DME distances from the FAR VOR/ DME, which is located to the south, between WOLUV and OBTIE.

To avoid DME confusion when it matters most, back up a bit and check the source for the published distances for each fix. While on the arc, of course, you’re navigating off of the VOR and its DME. Once you intercept final at or near WOLUV, which shows distance from both sources, you should be using DME from I-FAR, the localizer. That’s what’s shown at OBTIE, which is the localizer approach’s FAF. Still on the localizer, you continue using its DME all the way to your MAP at 1.7 DME.

With that straightened out, now look at how you’ll actually do it with but one nav receiver. En route, you’re on V344, which is the 210 radial from FAR, allowing you to conveniently enter the procedure from DAYAV. So, you’ve already got FAR tuned and identified, so just turn to fly the arc.

If your DME tunes from the nav, you’ve got it made. But, if it tunes manually, you should have it tuned to FAR. Fly the arc until that LR-177. In spite of the smooth turn on the chart, turn to a comfortable intercept angle, say 45 degrees, using a heading of 041 degrees.

Now, tune the localizer and DME if needed. You should get DME readings almost right away and the localizer, where you’ve changed the course pointer to 356 for reference, should come in after a moment. So, now you fly final to the MAP at 1.7 DME.

For the missed, you’ll switch back to navigating with the VOR/DME and select the new radial to take you out to your holding fix. You note that this won’t be that difficult since you’re able to use lateral nav and distance from the same source throughout the approach. This contrasts with some approaches that require you to continue using DME from a VOR after you switch to the localizer for lateral nav. At least you were spared that shuffle.

Hmmm … quite a different process from the glass-based buttonology, so you decide on a clear day to do a dry run of LOC and LOC/DME procedures. Then, armed with your skills with DME, approach timing and VOR radials, you’ll be all set to go places. But you still wonder if it’d be better or worse if your new plane came with ADF.