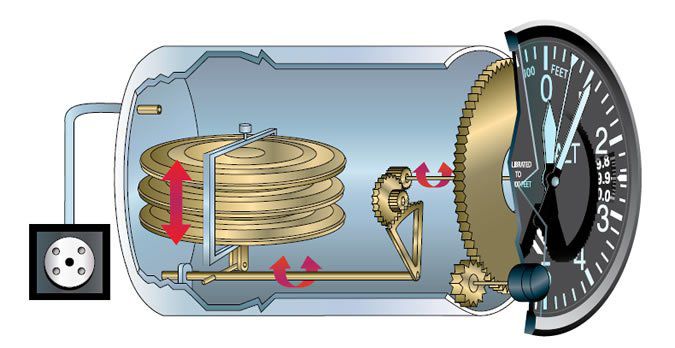 It’s no surprise that many pilots go into hibernation during the winter. Winter flying has its own set of risks and operational challenges. It’s cold. There’s the potential for frost on the wings and ice in the clouds. The winds are generally stronger. There are icy ramps and runways with poor traction. Oh, and did we mention that it’s cold?

One positive thing about flying during the winter is that the cold air improves aircraft performance. The cold air is denser than warm air. This “good side of density altitude” allows the engine to produce more power and the wings to produce more lift.

However, even this has a down side. The denser air also causes altimeters to indicate an altitude that is higher than the aircraft actually is. This is due to a fundamental limitation of altimeters and is a cause for concern because the induced altimeter error reduces the amount of obstacle protection on instrument procedures. In extreme conditions, obstacle protection disappears, potentially leading to a very bad day indeed.

To address these concerns, AIM 7-2-3 has long provided a method for pilots to optionally adjust their altitude to compensate for the cold-temperature-induced altimeter errors. Few did, so the FAA recently made altitude compensation mandatory in certain cases. Let’s dig deeper into those altimeter errors and see what we can do about them.

Let’s start by pointing out that altimeters don’t actually measure altitude. (Read on; don’t cancel your subscription just yet.) Instead, they measure pressure and correlate it to a height. This key distinction is at the center of temperature-induced altimeter errors. Pressure altimeters are calibrated to indicate true altitude (actual height above sea-level) under standard conditions only, and any deviation from standard conditions produces an error in the indicated altitude.

The international standard atmosphere (ISA) is the model of the atmosphere used as a baseline for aircraft performance. It defines the sea-level standard pressure and temperature to be 29.92 inches Hg and 15 degrees C, with a lapse rate of about 1 inch Hg and 2 degrees C per thousand feet of altitude (up to 36,000 feet). With our pressure altimeters, we can correct for non-standard pressure by adjusting the altimeter setting in the Kollsman window. However, the pressure altimeter has no such adjustment for non-standard temperatures.

Since the effects of temperature can’t be corrected by the altimeter, when we fly at a constant indicated altitude with a given altimeter setting, we are actually flying at a constant pressure level, rather than a constant true height above sea level. Any changes to the height of that pressure level—due either to local pressure changes or temperature differences—above sea level result in an increase or decrease in the indicated altitude, which the pilot (or autopilot) will notice and correct. These changes are usually gradual and subtle, so they’re seldom noticed.

Aviation, perhaps more than most endeavors, is rife with cute little memory-aid sayings. You probably remember “high to low, look out below” as applied to an aircraft flying from a high pressure area into a low pressure area. In these cases, unless the altimeter setting is adjusted, the height of the pressure level corresponding to the current altimeter setting, and therefore, true altitude, will decrease—we’ll be lower than we realize. The same phrase and logic applies to temperature. Colder, denser air at a given pressure level results in a decrease in true altitude. We just don’t have a knob on the altimeter to correct for it.

That Mountain Looks Too Close

The lowest altitudes published on instrument procedures are based on the height of terrain or obstructions plus a defined amount of required obstacle clearance (ROC). The concept of ROC is essentially a promise by the FAA that pilots will always have at least the ROC value above an obstruction, as long as the aircraft remains within a defined distance of the segment centerline. The ROC value varies by the approach segment and decreases closer to the airport.

When temperatures are below standard, an aircraft flying at the procedure’s published altitudes might not have the required obstacle protection. In extreme cases, the altimeter error could exceed the ROC, yielding little or no obstacle protection for the aircraft.

Minimum approach-procedure-segment altitudes are based on standard temperature. At lower-than-standard temperatures, you’re closer to the ground or obstacle than the procedure designer intended. That error is approximately four feet per thousand feet per degree C below standard. Thus, an aircraft indicating a pressure altitude that is 2000 feet AGL at ISA-10, is actually about 80 feet lower at 1920 feet AGL.

The likelihood and magnitude of altimeter errors increases with altitude, time and distance from the weather station. A weather observation describes the conditions that existed at the reporting station at the time of the observation. As the observation ages, and as the distance from or height above the station increases, there is a greater chance that the indicated altitude will be affected by localized temperature and pressure conditions existing at the aircraft’s location.

For instance, wind blowing through mountainous terrain can cause localized areas of high and low pressure due to the Bernoulli Effect. This is one of the reasons why there is additional ROC for enroute segments located within mountainous areas. Similarly, as height above the reporting station increases, the effects of a non-standard-temperature lapse rate will cause a larger error in the indicated altitude. Therefore, in order to correct for the effect of cold temperature on an altimeter, both the actual temperature and the aircraft’s height above the reporting station need to be considered.

Although it’s routine to constantly adjust our altimeters throughout a flight to account for non-standard barometric pressure, correcting for non-standard temperature has usually not been emphasized. By comparison, Canada, no stranger to cold temperatures, has required altitude adjustments to compensate for cold temperatures for years. After studying the problem since 1992, the FAA finally issued updated guidance in late 2014.

The FAA created a “Cold Temperature Restricted Airports” list that has procedures with published altitudes that are at risk during cold-temperature operations. That list includes airports that have, within the preceding five years, experienced temperatures sufficiently cold to cause at least a one percent chance of a procedure at the airport to have the ROC for a segment be penetrated by at least one percent. Only procedures to runways longer than 2500 feet within the 50 states were considered.

Adherence to adjustment procedures when observed temperatures at listed airports exceed a critical limit became mandatory in September of 2015. However, the absence of an airport from the list does not mean that the procedures at that airport are unaffected by cold-temperature errors. It only means that the airport did not meet the criteria to be included based upon its runway length, procedure design, or frequency of the cold temperatures. At these airports, altitude adjustment remains optional and is left up to the pilot.

You might have noticed a little snowflake icon () appearing on government approach charts for some airports beginning this past March. This icon indicates the airport is included in the “Cold Temperature Restricted Airports” list, and the temperature listed next to it indicates the critical-temperature limit, below which altitude adjustments are required. (Jeppesen uses a textual note rather than an icon to provide this information.) Keep in mind that these icons and notes are recent additions, and not all affected airports have had their approach plates updated with the new icon.

Making a cold-temperature correction currently requires hunting through a few different sources. The list of airports and temperature limitations is available on the FAA Aeronautical Information Services (formerly AeroNav Services) website and is also contained within the Notices to Airman Publication under Part 4, Graphic Notices.

Instructions on how to actually determine and apply the corrections (with examples) are currently only available in the Graphic Notices section of the NOTAM publication. Assuming no operational issues with the procedures come up this winter, the information found in the NOTAM publication will eventually be added to the AIM guidance. In addition, the table containing the adjustment values to use is available in AIM 7-2-3 as well as the general information and legend section of the government terminal procedures publication booklet.

When the reported temperature at an airport is lower than the critical-temperature limit, adjustments to some— but not necessarily all—altitudes shown on procedures need to be made. Therefore, even though an approach chart might have a snowflake icon and temperature shown, when an adjustment needs to be made, you still need to look up the airport on the actual list to find out which procedure segments require adjustment.

These cold-temperature limitations are unrelated to the published temperature limitations for uncompensated Baro-VNAV systems that are shown on RNAV (GPS) procedures with LNAV/VNAV minimums (such as “LNAV/VNAV NA below -20C”) and discussed in AIM 5-4-5 k 7 (f). Although these high- and low-temperature limits exist for the same fundamental reason as the adjustments we’re discussing—altimetry errors that result in the effective glidepath being too steep or shallow—they must be considered separately. Precision glidepaths on ILS and LPV procedures are unaffected by temperature variations since they are not determined by pressure altimetry.

Looking Out for Number One

This process of determining whether a procedure needs adjusted altitudes, then determining the adjustment to use may seem convoluted and possibly impractical for use in a cockpit, but it’s actually pragmatic. Rather than permanently penalizing segment altitudes on an affected procedure for the effects of a rare weather condition, this system allows adjustments to be made only when those weather conditions actually exist. However, it is made at the expense of additional awareness and workload for both pilots and ATC.

When a published altitude on an intermediate segment or missed approach needs to be adjusted, pilots are expected to report the corrected altitude being used to ATC on initial contact. In addition, ATC does not apply cold-temperature corrections to minimum-vectoring or minimum-IFR altitudes; aircraft on vectors should not apply corrections to these altitudes unless approved by ATC.

On the final segment, no ATC notification is required and the temperature corrected MDA or DA will be the new minimum for the procedure.

Since this results in a higher MDA or DA than is published, this seems like a penalty. However, keep in mind that the correction compensates for denser air by vertically putting the aircraft closer to where it would be in standard conditions. Otherwise, you could break out of the clouds a lot closer to the ground than you had planned. With that “penalty” you’re right where you’re supposed to be.

It’s a cold day at Williamsport, Pennsylvania (IPT), with the ASOS reporting -20 degrees C. The on the approach procedures tells us that it’s a cold-temperature-restricted airport. Since it’s colder than the -10 degrees C next to the icon, we’ll need to make some altitude adjustments.

The intermediate segment from ZAGTI crosses JIPAS, with a minimum altitude of 2800 feet. To use the altitude adjustment table, we start with the height of the segment altitude above the airport. (2800 minimum segment altitude minus 528 airport elevation is 2272 feet.)