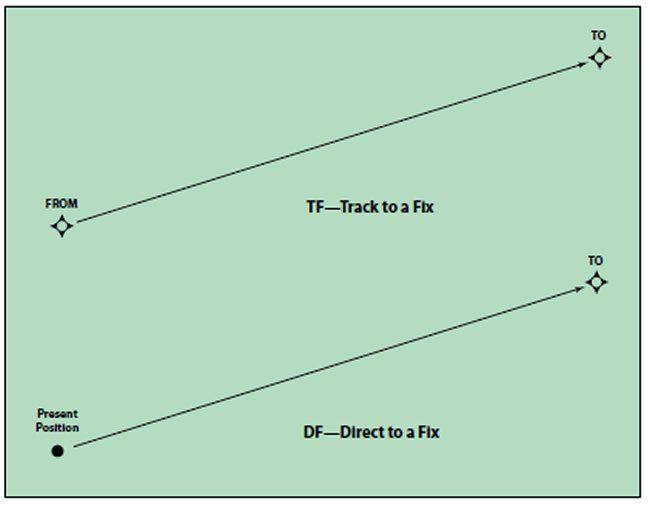 The second guy says, “The smartest machine is the jet airliner. It can fly to anywhere in the world in any kind of weather and even land itself.”

The third guy says, “Both of you are wrong. The smartest machine in the world is the thermos bottle.”

The first two men scoff. “The thermos bottle? All it does is keep hot things hot and cold things cold!”

That same question might be asked of your GPS navigator or Flight Management System. How does it know what to do? What tells it how to behave on a departure, an enroute segment or approach procedure, how to fly straight, curved and even variable paths? Understanding this can help you better work with the capabilities and, yes, limitations of that Magic Wonder Box.

A Simple Code
Every segment of every departure, enroute segment, arrival, and approach is a specific type of leg. Each of those legs is coded using a two letter identifier that is entered into the navigator’s brain. This coding is part of what you load with your frequent database updates.

The first letter of that two-letter code identifies the type of leg to be flown or the function the navigator will carry out on that leg. For example, that might be a heading, a course or an arc. The second letter tells the navigator where the leg ends—for example, at an altitude, a radial or a fix.

There are 23 different things that a navigator can do. These twenty three things are known as ARINC 424 Leg Types. They are also sometimes referred to as “Path Terminators” because they describe the path or action to be taken on that leg and they show where that path will end, so that the next leg may begin.

The first letter can be a V for vector (heading), C for course, D for direct, F for a course from a fix, H for hold and a few others. As specified by the second letter, the leg can terminate at an altitude (A), DME distance (D), a fix (F), intercept of the next leg (I), a radial (R) or even manually (M). Some legs are described in the Aeronautical Information Manual (AIM); all are listed in the table.

Floating Fixes
There’s an interesting point about the VA (heading to an altitude) leg type. The termination point for the VA leg type is a “Floating Waypoint” or a waypoint that has no fixed geographical coordinates. How can that be?

Similarly, most of the other heading leg types also terminate, not at a geographic point, but at a point determined by aircraft performance and current conditions. For instance, if you’re on a heading to intercept a course (radial, next leg) or even just a distance, the location of that point of intercept depends on the winds.

If you’ve ever wondered why you’re not allowed to edit a procedure by inserting a user fix, one reason is that none of the leg types include a provision for user fixes. So the navigator doesn’t know what to do with the user fix and won’t allow the operator to insert those types of fixes into a procedure.

Most Garmin navigators include all of the leg types except RF, although RF is even appearing in some installations. The RF leg type is used on new Required Navigation Performance (RNP) approaches that fly curved paths.

Turn radius is dependent on airspeed, winds and bank angle. The navigator will direct the pilot (or flight director or autopilot) to vary the bank angle to fly the correct curved track over the ground.

For those approaches, the notes on the approach chart will state “RF required,” meaning that the aircraft navigator must include the RF leg type.

Authorization May Be Required
Most GA pilots need not worry about their Garmin navigator not having the RF leg because as of right now there are only a small handful of approaches worldwide that use the RF leg type.

Real World Application
How would the leg system work in a real world situation?

Assume that you receive an ATC clearance for a departure that says “Fly the runway heading [010], to 3000 feet. Reaching 3000 feet, turn right to a heading of 090. On that heading intercept the 040 radial of the SPG VOR. When established on the 040 radial of SPG, climb and maintain 7000 feet.

Expect further clearance before reaching DUFUS.” (Note that this is the text instruction for a hypothetical published departure procedure that you can load from your navigator’s database.)

When you load that departure into your navigator, all of those leg types are there and your navigator will use them to deliver you to your destination.

George Shanks retired from a major U.S. airline and now teaches this and many other topics at a major independent training facility in Dallas, Texas.