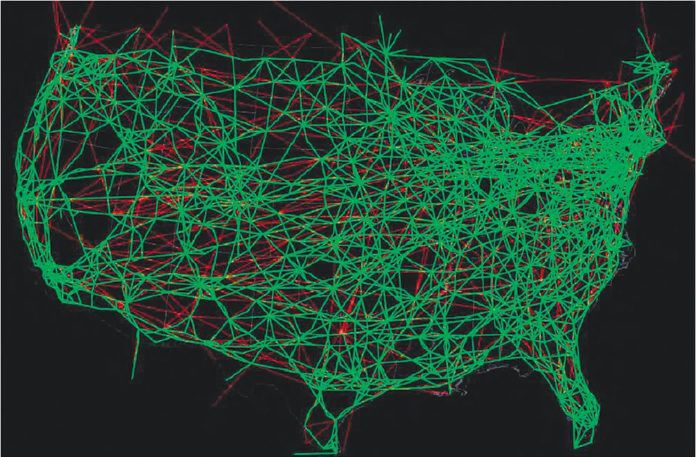 With everything going to GPS for navigation and position on ATC scopes, what happens if GPS fails? Fear not, the FAA has a plan. Don’t you feel better now?

It’s the summer of 2020, and you’re tooling along in your G10,000-equipped bugsmasher, dutifully tracking that magenta line direct to your destination because NextGen allows “free flight” RNAV-direct navigation. We’ve come so far from the days of A/N ranges and dead reckoning.

Suddenly, you get a warning: “GPS NAV LOST.” The magenta line disappears. The GPS NAV disconnects. You’re left looking at an HSI with the letters DR in it.

You turn to the radio and call ATC. Because your position is GPS-based—you’re now flying in the ADS-B world—ATC’s display has fallen into dead-reckoning mode as well. But they should still be able to see approximately where you are. However, unless you’re also on the primary radar backup, that accuracy will degrade with time.

We have clear procedures in place for lost comm. But lost nav only requires reporting the issue to ATC (FAR 91.187) and then … what?

Pull Up the MON
There has been much talk about having all our eggs in the GPS basket. To keep some navigation backup, the FAA plans to scale down from 967 VORs to 497 strategically placed stations by January 2020. It’s no coincidence that’s the drop-dead date for ADS-B-Out equipage. These VORs will constitute the Minimum Operating Network, or MON.

FAA set up an interagency working group to select VORs for discontinuance. They applied “operational, safety, cost and economic criteria” in making these decisions—hopefully in that order.

VORs outside the contiguous U.S. are being kept, as in Guam and Puerto Rico. VORs used for international airways and at the nation’s core 30 airports will remain. Readers in the western U.S. will be happy to know that all VORs in Alaska, the Western U.S. Mountainous Area (WUSMA as defined in 14 USC 95) and U.S. Islands and Territories are slated to stay. However, some VORs in California’s Central Valley and the Puget Sound area will be divested.
Note that all other functions of decommissioned VOR sites such as FSS communications, HIWAS, DME and TACAN will remain functional.

The aircraft would either fly out of the affected area or to an airport offering an ILS, localizer or VOR approach (a total of 4031 approaches, plus all 273 Cat II and Cat III ILSs). In the CONUS, that should be within 100 miles of any aircraft if MON goes into effect. MON will also support international arrivals and departures, but radar vectors, DME or ADF are not required for transition to approach and landing at these locations.

Yet to be developed by the FAA is documentation listing MON-qualified approaches and routes to them, including en route altitudes.

GPS outages are likely to be sporadic, local and brief, often under five minutes. A call to ATC or FSS to report the problem, and using dead reckoning or MON temporarily to get clear of the outage, is a real possibility. Clearly, new AIM sections and perhaps new regs will be needed to clarify how IFR will be conducted using MON.

MON stands or falls on sharp VOR-flying skills—skills commonly weak because GPS is much easier. This great plan may mean nothing but chaos or worse in the hands of the non-proficient.

It’s also unclear what future avionics might do on this issue. Currently, a G1000 that loses GPS falls into dead-reckoning mode, updating its position continuously with airspeed and heading. However, DR is only available during en route mode more than 30 miles from the departure or destination airport. Some future version might switch directly into MON rather than DR mode. Regardless, you should check your FMS manual to learn what happens when GPS goes dark.

Beyond MON
MON is an interim solution. GPS provides positioning, navigation and timing, collectively called PNT. An alternate source of PNT, called APNT, is being developed to provide continued IFR performance-based navigation (what you might see called “Required Navigational Performance,” or RNP) and ADS-B during a GPS outage. Ground based, APNT is expected to maintain safety and security and to minimize economic impact of GPS loss, but it’s specs are yet to be set.

In contrast to MON, APNT will enable a smooth transition to backup navigation. APNT is intended to minimally affect NextGen operations. Deployment is expected around 2025, giving MON about a six-year lifespan.

But that’s assuming the FAA’s plans go forward on schedule. ‘Nuff said.
“Hey Fred,” you might say. “But if I have an IFR WAAS GPS, I’m not required to even have a VOR receiver installed in the aircraft. What’s the FAA’s backup plan for me?”

Good question. You might want to keep that old KX-155 in the panel and dust off your VOR-tracking skills from time to time.
Or get really good at dead reckoning.

How Vulnerable is the GPS system?
Not very. At least to any natural phenomena we’ve seen so far. In 2011, the GPS Report Card reported average availability of six satellites in view at 99.99 percent. Between April and July 2012, it was 100 percent. This is better than expected radar availability, which is 99.5 percent.

At least four satellites are needed for RAIM if the FMS can derive altitude from your altimeter, reducing the likelihood of an airborne outage. Having five allows one corrupted satellite to be excluded. The GPS satellite constellation is designed to have at least five visible from anywhere on earth. Typically, 7-12 satellites are in view. There is tangible redundancy here.

As of June 2012, seven orbiting satellites offer not one, but two civilian GPS signals. Another two offer three frequencies. The latest series now in development will add yet a fourth. In addition, each generation offers more powerful signals than the last.

Perhaps the best example of GPS’ robustness came on March 7-9, 2012, when a solar storm disrupted satellite communications and even forced airlines to reroute some flights. Yet only slight changes to GPS reception occurred in some parts of Alaska. All 31 GPS satellites remained fully functional. However, a solar flare on Dec. 6, 2006 caused widespread GPS equipment outages. Whether the flare then was stronger or the GPS system now is more robust is hard to say.

Solar activity can distort GPS signals as they pass through the ionosphere, causing an “iono storm” which induces inaccuracy errors, especially to WAAS. More solar storms are expected in 2013-2014 as the Sun reaches “solar max.” In 2011, WAAS managers began an “Iono Robustness” project to increase WAAS LPV availability during the solar maximum expected in 2013.
We’ll see how it all works out soon. You might want to be sure you have a secondary means of navigation—or fly at night. No joke. —F.S.

Special thanks to Mr. Greg Joyner, Manager, Navigation Program Engineering with the FAA, who patiently answered all my many questions.
Fred Simonds is a gold-seal CFI, check airman and certified G1000 instructor. His website is www.fredonflying.com.