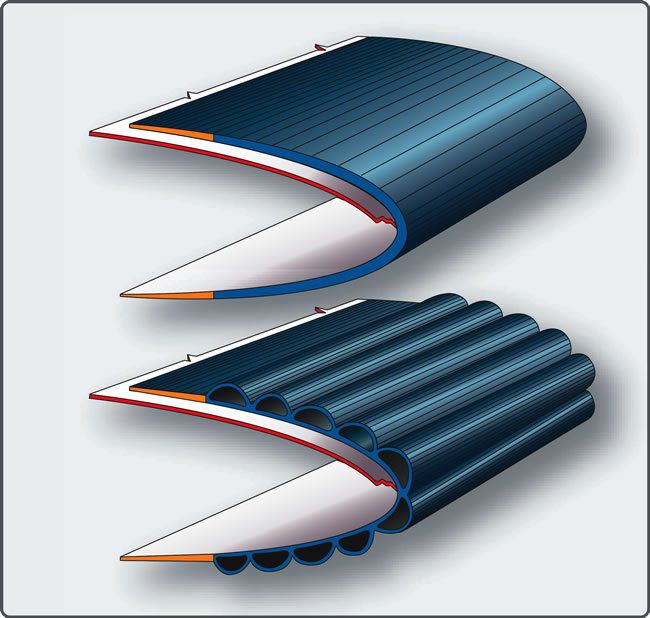 Certification for flight into known icing is expensive. Since most GA airplanes are Sunday drivers the benefit doesn’t justify the cost. Instead, airplane manufactures and aftermarket providers may offer pieces of a full system. This piecemeal application of anti-icing or de-icing equipment circumvents the testing requirements while providing a pilot with some additional—if not certified—options. Four methods of anti/de-icing exist: hot air, electrical resistance, liquid and boots.

The least common of these in GA birds is hot air. Jet engines spew hot air in abundance. Airliners and biz-jets often use it for anti-icing engines and wings. Using hot air in piston aircraft usually ends at de-frosting windshields. Therefore, other anti/de-icing systems are more common.
Almost every GA airplane has an electrical resistance (heat) anti-icing system—pitot heat. This method can also be used for windshields. Often these are “hot plates,” a small electrically-heated windshield panel on top of a normal, non-heated windshield. Propellers can also be kept clean by electric heat. The downside of electrical heating is that it draws a lot of power.

Electrical resistance isn’t used to treat large areas because of the high current demand. Instead, wings use either a liquid system or boots. A popular wing system is a weeping wing where a special fluid is pumped out of tiny holes in the leading edge of the wing. As the fluid moves aft, it keeps a significant portion of the wing clean. Liquid systems typically using alcohol are also used on propellers and windshields. The disadvantage of liquid systems is the weight of the liquid, limited storage capacity and system complexity.

The old standard for wing de-icing is boots. Unlike the cowboy variety these are made from rubber and are glued to the leading edge of the wing. Within the boots are multiple chambers that run the length of boot. When pneumatic pressure is applied, the chambers expand like a balloon, breaking the ice apart. The air to inflate the boots comes from the pump that also runs the vacuum gyros. The suction side powers the gyros and keeps boots deflated when not operating. The pressure side inflates the boots when needed.

Advantages and disadvantages exist for each system. They also require pre-flight inspections and maintenance. But, if you plan on flying frequently during the winter months or cruising at altitudes where it is always freezing, these systems buy a pilot a little more time to get out of icing.