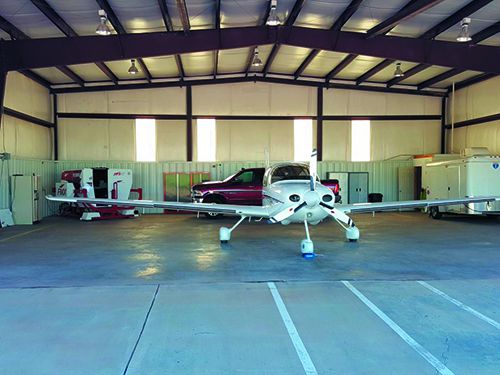 Last September, my Remarks lamented my experiences with FlyThisSim, trying to get delivery of a simulator I’d paid for long ago. Readers of this page might note that I live and base my aircraft in Santa Fe, NM.

Responding to that editorial, one reader (I’ll call Eric), sent me a note. Eric lived “nearby”—a relative term—in southeast New Mexico. Eric said he has a Redbird TD in a trailer and a Redbird FMX, both in his hangar, that he makes available to pilots at no charge. He invited me to fly his sims any time. I noted that this opportunity was around an hour flight or a multi-hour drive from home. I thanked Eric and moved on.

Fast forward to my February Remarks where I explained that while getting an annual during an extended avionics installation, a few prohibited holes were found in a structural member. This doubled the planned twomonth effort, and I fell out of currency. As I was finally scheduling a trip to get the airplane, I recalled Eric’s offer.

I’d not spent much time in that part of the state and I did require instrument currency to fly my plane home in Class A Airspace, so Eric’s offer made sense. Over
multiple scheduling e-mails, Eric encouraged me to fly his sims, invited us to stay in his home when I said my wife and I would probably drive and make a two-day trip of it, then offered to fly up to get us when the schedule got tight. Eric and I had never met, never talked, yet over just a few e-mails he was offering hospitality and generosity as if we’d been close friends for years.

Eric was so genuine, so sincere, that it didn’t occur to us that we’d be imposing. We ultimately settled on a plan to drive and meet Eric at the airport. When we met and shook hands, Eric immediately gave me a key to his hangar so I could have unfettered future access to his sims. We’d just met. Yet, joined in the camaraderie of aviation, Eric merely assumed I was a worthy friend he could trust. I’ll strive to be at least that.

We spent a delightful afternoon meeting some of Eric’s hangar neighbors, flying the sims with Eric’s guidance, and getting to know each other. Then, we hopped into his Cirrus and he took us flightseeing around the local area. I’d said in our e-mails that we wanted to take Eric to dinner, but while at dinner Eric had surreptitiously picked up the bill. We followed Eric to his amazing home, where he presented us with some gifts from his orchards.

By the way, if southeast New Mexico is “nearby” for you and you need some sim time, Eric said you’d also be welcome. Just send me a note and I’ll put you in touch.

In an age where hate is in vogue, my wife and I were reminded that such kind and generous people like Eric still form the backbone of our aviation community. Thank you, Eric, for your delightful hospitality and for your vivid demonstration of the depth of kindness and trust that’s in the human spirit.