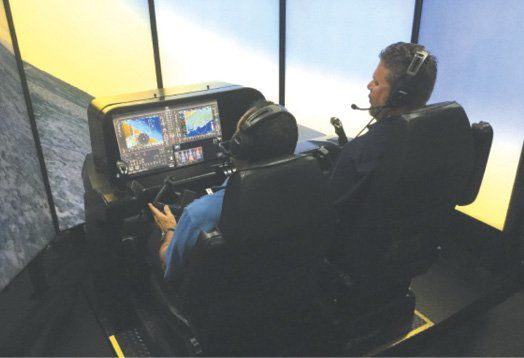 (Note that I use “proficiency” and “legality” as separate concepts, as you should. Legality keeps the FAA happy. Proficiency keeps my passengers happy.)

A couple years ago I undertook to have FlyThisSim build a simulator that matched my Cessna 340A as closely as possible. During that process, I got to know co-founder Carl Suttle as an energetic and expert designer of simulation systems, and a man of high integrity. Consequently, I’ve talked quite favorably in these pages about FlyThisSim. No more.

As my simulator was nearing completion in July 2018, Carl left his company because of some conflict with their new investor, Meiya Group, chaired by Roland Pinto. I won’t go into specifics, but after paying in full for my simulator about 18 months ago, Mr. Pinto ultimately ignored all my attempts to get my sim. The Cirrus Owners & Pilots Association, another big proponent of FlyThisSim (FTS), has now advised their members, “Any dealing with FTS is at high risk of non-delivery and potential loss of funds exchanged.”

In anticipation of having the sim, I purchased a very nice hangar with an office, and a simulator room that until recently housed the previous owner’s AATD simulator that he rented to local pilots and the local flight school. While waiting endlessly for my simulator, I’d been flying that sim to maintain proficiency. The owner recently sold it. There’s no other sim nearby. Now what?

My insurance required an IPC this year. So, teamed with a local instructor, we spent nearly two hours in the airplane. This training was eye-opening. I was surprised at the challenges that were presented by the IPC. I was quite comfortable shooting a few approaches in the sim as needed, but the reality of doing it in the airplane revealed shortcomings that didn’t show in the sim. Okay, perhaps an in-airplane IPC occasionally is a good adjunct to sim work.

But, even with an IPC now and then, I’ve relied on the sim to fly unfamiliar approaches to new airports, and to keep myself proficient. What will I do without a sim? Actually, the answer has come to me as I conceive these remarks. Unless FlyThisSim actually delivers—for which there’s a new glimmer of hope as of this writing in late July—I’ll have to build one. Sure, it would be nice to have a certified sim to log my approaches, but with the occasional IPC, I’ll remain legal anyway. Then, I’m free to use the sim I’d build for proficiency. I just can’t log the time—which isn’t a major drawback.

With that realization, I’m going to change my tune. I still believe that a simulator is an essential element in maintaining proficiency. But, it’s not the only one. Simulator time should be combined with time in the airplane, probably yielding the best of both worlds. Besides, I’ll never be able to buy a certified sim that matches my airplane, but I can build a non-certified sim that’s pretty close. See? It’s a win-win.