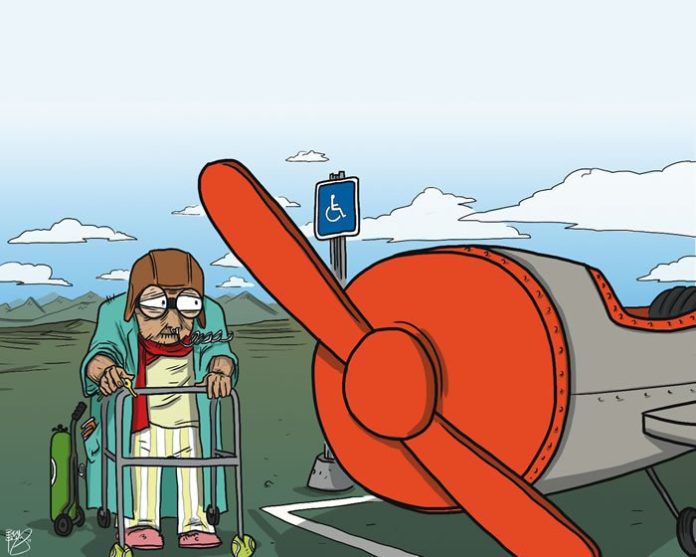 Many times I’ve mentioned that my day job is flying airliners. With flying as a second career for me after 30 years in the computer industry, I’m often asked how long I intend to fly. My flip answer has always been, “Until I bust a sim check, line check or medical, or until the company pisses me off one too many times.” I never thought to add, “Until I age out.”

I’m reaching that numerical age where yesterday, according to the FAA, I was suitable to hold responsibility for all those lives in my—thus far—capable hands, but tomorrow I am not. This barrier has caused me a lot of reflection.

I could retire, but I simply don’t want to. I like to fly. Is an age cutoff for Part 121 airline pilots appropriate? If so, shouldn’t it also be for all pilots? After all, safety is an absolute concept, not a variable depending on bureaucratic regulations. (Truth is, the history of the age restriction is politics and economics, not safety, but that’s a different rant.)

The medical exam is one step. But how valid is it? How many of us actually have an accident for medical causes? The answer is statistically insignificant, suggesting the medical exam is doing its job. That leaves performance.

We’ve got the Biennial Flight Review. But, given some of the pilot antics we all see, apparently it’s not enough.

A few years ago I participated in a pilot-aging study. Each year I took a battery of mental acuity tests and performance tests in a simulator to evaluate attentiveness to, and handling of abnormal situations. A baseline performance level on tests like these could be scientifically established below which a person’s inherent capacity to fly an airplane (or drive, for that matter) could be called into question.

That could be part of the BFR. But these kinds of tests require a controlled environment and can’t be performed by your local CFI. Special testing centers would need to be established and the cost would likely reach $1000. I’d pay that to keep flying, but many of us would not.

Airline pilots get frequent classroom and simulator evaluations and regular line checks. That might be a happy medium. The BFR could include something similar and the regular training aspect should be useful to anybody. Let’s face it, whatever the answer, the current structure is inadequate to properly evaluate who should (shouldn’t) be flying.

Me? Well, since neither the FAA nor ICAO has seen fit to evaluate airline pilots based solely on ability and performance, I’ve decided to seek a job flying under Parts 91 or 135 where I can continue until I bust a sim check, line check or medical, or until the company pisses me off one too many times.