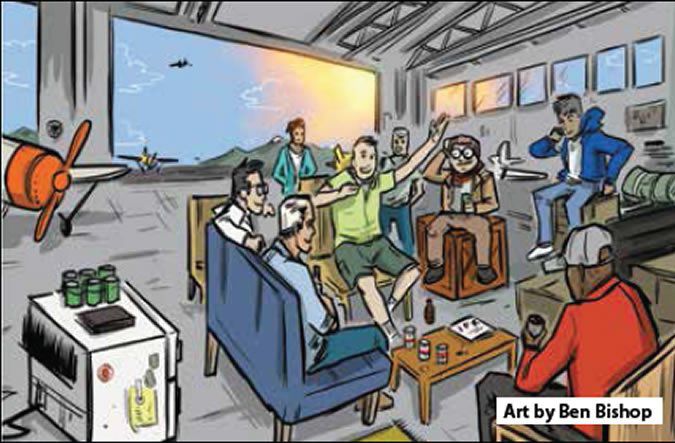 I was once an active “airport bum,” hanging around the home ‘drome in much of my spare time. Then things got busy, the complexion of the airport changed and, well, I miss those days.

Not only were they socially rewarding, but many conversations were truly enlightening. Sure, we had our share of “there I was” stories to impress (The first liar doesn’t stand a chance, right?), but just as often we’d end up discussing some obscure aspect of aviation. Our group included students, airline pilots, a helicopter jock and an aerobat. Aircraft included a homebuilt, a Pitts and a twin. At those sessions we were all equals, we all contributed and we all learned. Oh, and we all drank our share of beer.

Of the many contributors who make this magazine what it is, Fred Simonds and Jordan Miller are a couple guys who can get to the bottom of anything, even if it means poring through various arcane FAA documents or even the Federal Register. So, in an innocent looking e-mail, I asked them to collaborate to dig into the topic. I had no idea of the monster I was creating.

The plan was simply for a one-page article. Now, a one-page article would pay barely enough for the effort to write it, much less the—as it turned out—extensive research necessary to draw a supportable conclusion. Or two. But they jumped in willingly.

The result was hangar flying at its best. They went back and forth, one explaining what additional information he’d unearthed. That sent the other off to dig deeper and, inevitably, he’d come up with something more. Me? Well, I was out of my league with these first-class researchers, so I donned my most officious editor’s posture and played moderator, pretending to grasp the nuances of what they’d found.

Along the way, the plan changed. About half way through the extended electronic hangar flying, we decided that both answers were supportable. So, with perfect Solomon wisdom, I asked them each to take a differing stance and write their one-page article. I’d then put them in the magazine on facing pages with a point/counterpoint kind of presentation, leaving the conclusion up to the reader.

In the end, the plan came full circle. We concluded that a final answer was available—and will appear next month—if the path to it is fraught with controversy and misinformation, even from the FAA. Now, while this is an important topic, the biggest benefit to us was the process. That collaboration was fun, rewarding and productive—the best hangar flying possible. All we missed was the beer.

(Hangar flying is a fun, cheap way to stay in the game. While it doesn’t build skill, it can hone your knowledge and keep you stimulated. Consider finding like-minded pilots in a social setting, or even joining a group like the IMC Club.)