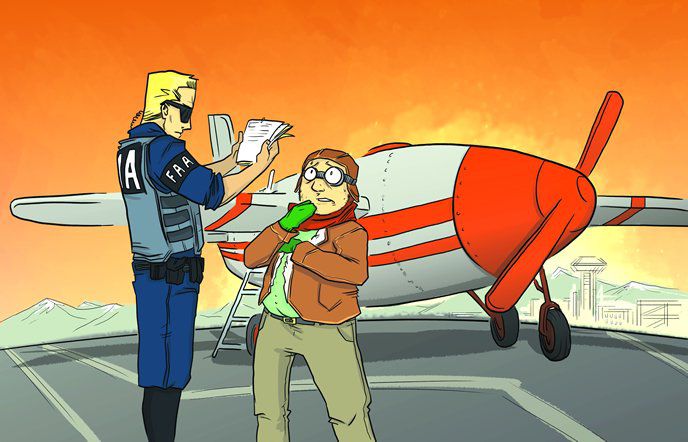 Of the many tens of thousands of FAA employees, most are conscientious hardworking folks who want to do a good job. Nonetheless, the FAA has a reputation for overly aggressive, yet seemingly arbitrary enforcement action by certain individuals in positions of authority over pilots.

A quick read through 14 CFR Part 91 offers a near-infinite number of ways a pilot can run afoul of the FAA with little to protect us. About our only defenses are a legal assistance plan like the AOPA offers and the wholly pilot- and safety-focused Aviation Safety Reporting System (ASRS). (If you don’t know about ASRS, download, read and study AC-0046E. Now. My meager words here can wait.)

Sen. James Inhofe, a pilot, was the subject of an FAA investigation in 2010 for violating the catch-all regs, 91.13 (Careless and Reckless) and 91.103 (Preflight Action). He didn’t like how he was treated, so he introduced the first Pilot’s Bill of Rights Act (aka the “Inhofe Revenge Bill”). It became law in 2012.

Among other things, that law requires the FAA to provide timely, written notification to an individual who is the subject of an investigation relating to the approval, denial, suspension, modification or revocation of an airman certificate. It requires the FAA to inform the individual as to the nature of the investigation. The individual need not respond and if the pilot doesn’t respond the FAA is prohibited from making any adverse inference. The pilot must be advised that anything said may be used against him or her, including on calls to ATC facilities, which are routinely recorded without explicit notice.

The law further provides access to air traffic data from the FAA or contractors. This addresses claims that the FAA has withheld such information because it would help the individual’s defense, show that the FAA—typically ATC—was at fault and not the pilot, and sometimes because data was held by an FAA contractor. Some even claim that the FAA has erased radar data in an effort to protect themselves at the pilot’s expense.

The Pilot’s Bill of Rights was a step in the right direction. It offered some legal protections that had been sorely lacking. But that did not satisfy Sen. Inhofe. In March he made a speech on the Senate floor supporting Pilot’s Bill of Rights 2, S.571, that was introduced in February. The timing is fortuitous because it fits right in with a series of hearings the Commerce Committee will be holding this year for FAA reauthorization. Money talks.

Most pilots absolutely love this bill because it abolishes the third-class medical for most recreational flying. But the bill also contains important additional provisions that not only strengthen pilots’ rights but also place more burdens on the FAA to make its case. The bill even gives FAA lawyers more flexibility in resolving cases using warning letters or letters of correction as opposed to suspension or revocation.

So do we at last have some rights? Yes, we do and may get more. However, the Pilot’s Bill of Rights 2 (S.571) is not yet law. If you favor it, let your Congress critters know. Better yet, contact their office and offer to take ’em for a ride. Just make sure that FAA inspector you’ve been avoiding isn’t lurking in the shadows.