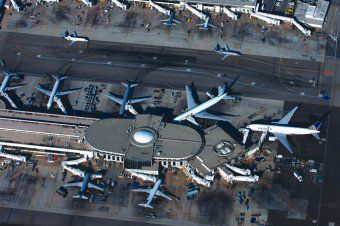 Recently, I witnessed a ground collision between an airliner and a baggage tug. While I tend to be rather stoic in such matters, in retrospect this incident left me surprisingly rattled.

As I’ve previously mentioned in these pages, by night I’m editor of this magazine, but by day I wear the hat of an airline pilot.

We had just landed at one of the busiest airports in the world. Most large airports have hectic and often chaotic ground movements with all the aircraft, baggage tugs and carts, catering trucks, fuel trucks, etc. I often remark that I’d rather hand fly a CAT II ILS to minimums using raw data while picking up ice in a blustery snow storm than taxi in from the runway. Thus, I tend to be rather slow and deliberate—and occasionally a bit hesitant—when taxiing at large or unfamiliar airports.

The other night I was a little uncertain about how to proceed and I began to miss the turn from the taxiway down my assigned alley. That’s not a big deal since the alley is wide enough for multiple aircraft. Realizing the error I was making, I simply turned into the alley a bit late, angling over to the line I was supposed to be on. It seems that my hesitation, though, induced the aircraft behind me to cut the corner into the alley on the same taxi line. He ended up in front of me, so I stopped a bit abruptly to let him in. As he cut the corner to the taxi line, his wing and a baggage tug collided. Fortunately, nobody was seriously injured, but the wing was damaged and the tug was on its side.

This unfolded right in front of me. As we sat there, blocked by the accident, I reflected on what might have happened had I not been hesitant, had I been familiar with that ramp. Would I have been the one not to see the tug, possibly ending my day job forever?

I want to think that either my first officer or I would have seen the tug. The truth is, though, that it was night, dark, overcast and raining, so it’s quite possible that I’d have been as oblivious to the presence of the tug as the unfortunate pilot in front of us.

The takeaway from all this for me was that in many cases, accidents happen not when we’re doing something difficult, but when we’re doing something routine. When things are difficult, our senses are heightened and we’re paying close attention. When things seem routine, our attention wanders and it’s often easier to have a mishap because we’ve simply done this same thing uneventfully hundreds or thousands of times before, making us complacent.

For me, I’ll continue to taxi a bit slower and more deliberately, especially at the busiest or unfamiliar airports. But even at the most familiar airports, I’ll be trying to guard against complacency and watch carefully for anything that might be coming out of the shadows on a collision course.

Oh, and if you encounter some interloper at your home ‘drome who seems hesitant, don’t be impatient. Sure, his hesitation might delay you a moment or two, but not nearly so long as the accident investigation will delay you if something goes wrong in your complacent hurry.