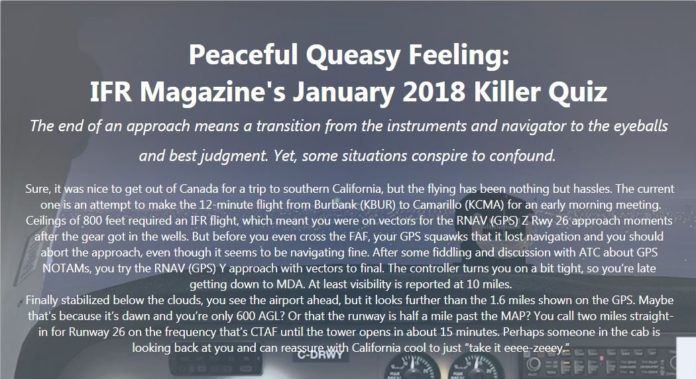 Sure, it was nice to get out of Canada for a trip to southern California, but the flying has been nothing but hassles. The current one is an attempt to make the 12-minute flight from Burbank (KBUR) to Camarillo (KCMA) for an early morning meeting.

Ceilings of 800 feet required an IFR flight, which meant you were on vectors for the RNAV (GPS) Z Rwy 26 approach moments after the gear got in the wells. But before you even cross the FAF, your GPS squawks that it lost navigation and you should abort the approach, even though it seems to be navigating fine. After some fiddling and discussion with ATC about GPS NOTAMs, you try the RNAV (GPS) Y approach with vectors to final. The controller turns you on a bit tight, so you’re late getting down to MDA. At least visibility is reported at 10 miles.

Finally stabilized below the clouds, you see the airport ahead, but it looks further than the 1.6 miles shown on the GPS. Maybe that’s because it’s dawn and you’re only 600 AGL? Or that the runway is half a mile past the MAP?

You call two miles straight-in for Runway 26 on the frequency that’s CTAF until the tower opens in about 15 minutes. Perhaps someone in the cab is looking back at you and can reassure with California cool to just “take it eeee-zeeey.”

Click the preview image below to take our new and improved Killer Quiz! 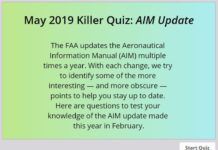