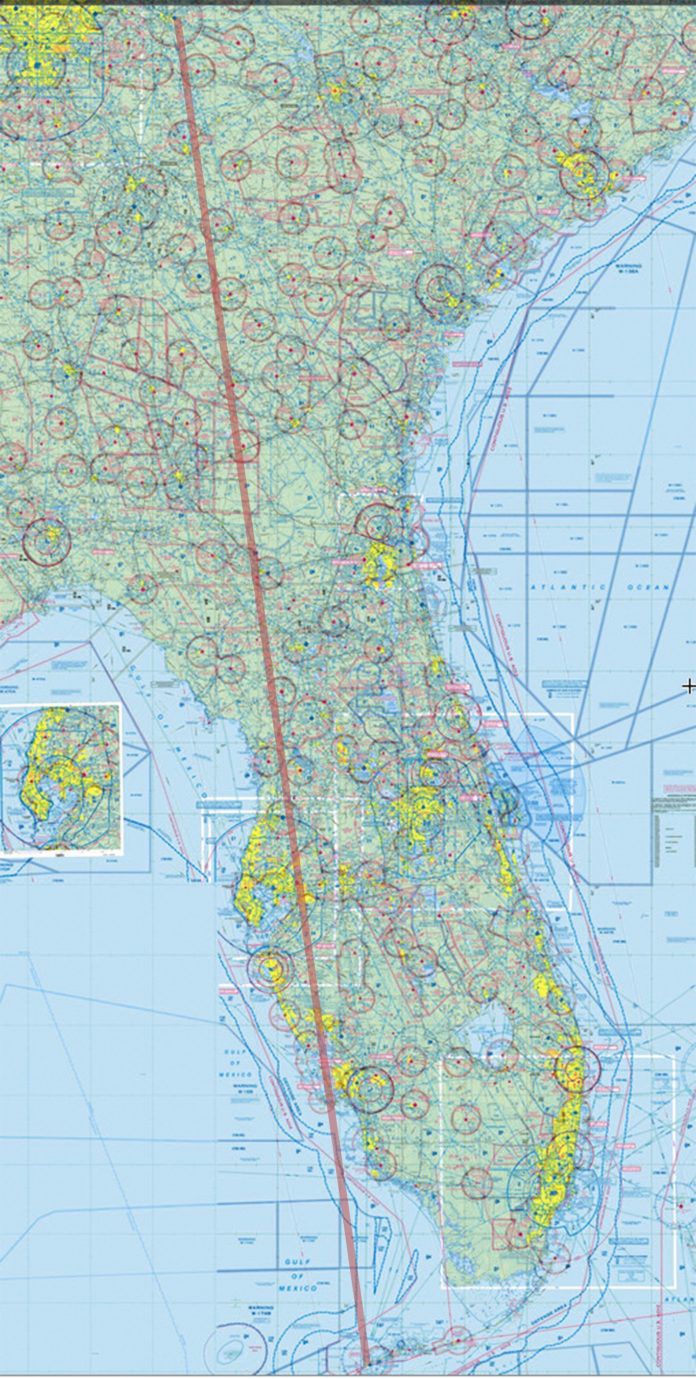 Congratulations! You’ve planned a trip to the beautiful Florida Keys and found the time to take it. Say goodbye to the wintry chill in Illinois and head for the beach! As the pilot of a six-seat single with gobs of space for two more friends, you are a rock star.

Naturally, you want blue skies and full sun to get the most out of such a trip. There’s usually no issue with that, but the Gulf region and Florida Keys have their share of showers and thunderstorms. Hurricanes and tropical storms not withstanding, weather here is dynamic, so you’re going to start familiarizing yourself with this new territory early. Little do you know that it’s the mapping, not the weather, that will catch you by surprise.

A week before the flight you’re perusing two legs to file from Springfield, Illinois. Your first leg to Athens, Georgia for a fuel stop is a no-brainer; it’ll be about two and a half hours and you can top off for the remainder of the trip to the Keys.

It’s immediately obvious that the second leg will take some examination. Plotting from KAHN to KEYW to check the distance, you see the three-hour route slicing right over a whole lot of Gulf after passing Fort Myers, plus a bunch of serious-looking airspace layered together. So direct would require a lot of research, even if you wanted to spend more than 100 miles overflying water, which you don’t. You keep looking.

Your next option is to find a fix over land. How about KAHN to DEEDS then direct EYW, which will put you over water for 73 NM? Put that in the maybe pile. Next option: DEEDS DVALL V157 to EYW. This cuts the overwater distance to 57 miles. (You don’t know this yet, but moderate precipitation just offshore will eventually have you deferring this option for another time, maybe for the trip back.)

Then you see that V157 gets awfully close to some kind of restricted airspace you’ve not encountered before, but you’re sure it’s something important. Since you want minimal time over water anyway, this route also goes on the maybe pile.

Okay, on to the next option: How about fly DEEDS to The Florida Keys Marathon International on the east side of the archipelago, then cancel IFR and take a scenic flight to Key West? Now that sounds like fun. With just 27 NM over water from the mainland to Marathon, this offers safety from the airspace and for the over-water flying. Your decide to file DEEDS, overfly Marathon and head to KEYW. Done.

Not so fast. A closer look at the Marathon airport (a good stop for another break and fuel fill-up) shows that the associated navaid is not, as you first assumed, a VOR. It’s an NDB. The chart also shows an airway-like light brown line from DEEDS to MTH. This is in fact an airway for the non-directional beacon, labeled B9 with an MEA of 2000 feet and MOCA of 1500 feet—interesting, but not enough to warrant extra research. You won’t need to use either.

Just watch out for the restricted airspace R-2916 to the north of course. Those you do know about as they’re sprinkled around the Midwest, usually within large swaths of MOAs (Military Operations Areas). R-2916 isn’t an issue unless it’s closed to traffic, in which case aircraft would be rerouted.

Now back to the unknown airspace in the Gulf. After all, weather, clearances and such could mean a reroute. Even if you negotiated something with less time offshore, you might end up compromising a bit. Finding a legend isn’t always easy on an EFB, and yours is no exception. The go-to source for any chart symbol is the Aeronautical Chart User’s Guide, which you can save as a PDF in the documents section of most electronic flight bags.

Start with the ADIZ, or Air Defense Identification Zone. The chart guide says that under 14 CFR Part 99, “an ADIZ is an area in which the ready identification, location, and control of all aircraft is required in the interest of national security. ADIZ boundaries include Alaska, Hawaii, Guam, Canada and the Contiguous U.S.” AIM Chapter 5, Section 6 notes that an ADIZ requires a flight plan and, for IFR, “normal IFR position reporting.”

Moving on to the Warning areas, which include W-174F and G and W-168 embedded within the ADIZ. These have, according to AIM Chapter 3 Section 4, “activity that may be hazardous to nonparticipating aircraft.” Even if you were to penetrate a warning area with more direct routing, you’d be coordinating with ATC, so it’s not as big a deal as all that water.

In all the excitement over airspace, you get behind schedule figuring out if you want additional gear for the over-water leg. Now, as a personal flight in a light airplane, you know you’re not required to have stuff like life rafts and such as referenced in 91.509. Nevertheless, you’ve got three life vests, and can even a borrow four-person life raft to tuck behind the seats. Sure, why not? Still, you don’t feel prepared for a ditching or other over-water emergency; all the survival gear on board is only as good as the knowledge of how to use it.

All in all, the airspace, routing and the charts took more time than you’ll use to examine the weather, which is calling for good VFR on the trip south. As far as flying over water, you ultimately chose to spend the least number of miles offshore. You also are keeping a safe distance from special use airspace while taking the time to understand the whole picture. Now, time to sit back, relax and enjoy the flight to Florida. Spring break, on the beach, with a few adult beverages awaits.

Elaine Kauh is a CFII in eastern Wisconsin. She likes to fly just off the shores of northern Lake Michigan, which does have islands, sandy beaches and surf, but no palm trees.