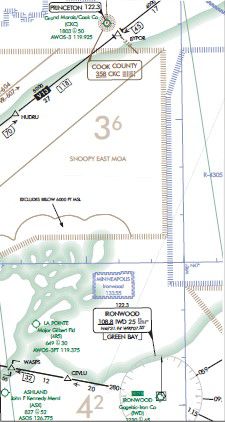 During the summer, many pilots in the Upper Midwest plan half-day flights for vacation, and it’s inevitable that we have to contend with theGreat Lakes. Whether we stop short, go around, or go across, there’s always added bulk to the flight planning.

Want to overfly Lake Superior for both the view and the shortcut? There’s a lot to consider. Even if you’d never do that, plan it anyway as you’re guaranteed to pick up some useful knowledge. So dive in—the water’s really, really cold.

Picture yourself in a piston single, two miles over your favorite Great Lake. Are you thinking, “Not me,” “Never,” or “Maybe”? There are probably a couple of “Sure, always” types, but we don’t hear from them much. For the “Nevers,”— most of us—it’s obvious: Why increase the risk when you can simply fly around the lake? That makes perfect sense.

Those in the Maybe column think the same way. But they would (consider) flying over water under certain conditions: 1) When water temperatures, even if only tepid, are warmest; 2) Only IFR; 3) Only with clear skies, or at least above 15,000 feet; and 4) With emergency equipment on board, personal flotation devices at the minimum.

Assuming it’s still a go, we turn to routing. If flying over Lake Superior, pick a destination in the far reaches of the Wisconsin/Minnesota borders. There are many options, such as circumnavigating the lake or slicing through the southwestern corner so that you’re over water for only a few miles.

To make it more interesting, we’ll cross Lake Superior from Grand Marais, MN (KCKC), to La Pointe, Wisconsin (4R5). After a pleasant night at Grand Marais, today’s plan is to fly south to La Pointe’s Major Gilbert Field (4R5), a single runway on Madeleine Island. This popular hiking/boating destination is just off the state’s northern shore, part of the Apostle Islands. The 3000-foot paved runway (4/22) has one RNAV approach for each end.

Sounds like fun, but why not fly down along the shoreline towards Superior/ Duluth, then head east towards Ashland to reach the island? Logical, but it wouldn’t happen today. That light east wind has the shoreline airports socked in with fog.

Lesson one: These big lakes can have unusual weather patterns. And, due to an abrupt temperature change, today it’s clear with haze over the lake on the Wisconsin side. On days like this, visibility can be reported as 10 SM, but in reality, it’ll be just four or five in flight.

So, it’s 64.8 miles straight-line from KCKC to 4R5, and an instrument approach is in store at the destination. Distance-wise, this is a typical journey, although you can conjure routes that might take you 100 miles or more (shore-to-shore).

Although there are many airways over the Great Lakes, there isn’t one we can use, so plan to go direct. But it’s not just empty airspace. The route across cuts through two MOAs: Snoopy West and Snoopy East. The West section floor is 6000 feet MSL and goes to 17,999 feet. Normal hours are “intermittently 0800-2200, Monday-Saturday” and by NOTAM. Snoopy East has the same effective times, but its floor is 300 feet AGL.

Excluded is the airspace within five miles of the islands, below 6000 feet MSL. There’s a good chance ATC will reroute you depending on their ability to provide IFR traffic separation in the MOA. On the plus side, you won’t get directed further east out over the lake the adjacent Restricted Area R-4305. 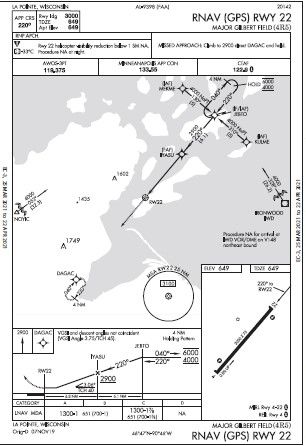 Lesson two: Large bodies of water, including the Great Lakes and oceanic shorelines, have lots of Special Use Airspace.

It’s a warm day, 25 degrees C (77 degrees F if you haven’t made the transition) at Grand Marais, with standard barometric pressure. We’re taking a Cessna 177RG, and, not having looked much at climb performance as of late, we’ll find a convenient chart in the POH called “Time, Fuel, and Distance to Climb.” Actually, there are two charts for this: normal and maximum rate of climb. Grand Marais (elevation 1803 feet) is close to 2000 feet pressure altitude today, so use that line on the charts. Does it matter which climb speed you use? Sure does.

You might wonder why we are climbing so high for such a short flight. Section 3 of the POH also includes a Maximum Glide chart. It indicates, rather imprecisely, a glide of about 16 NM from 10,000 feet AGL. This may not get you to an airport but perhaps to the shoreline if a power failure is experienced. If you want the next IFR altitude of 14,000 feet for added insurance, other caveats emerge. First, the regs for supplemental oxygen under 14 CFR §91.211 come to mind, but for 50-60 miles probably won’t apply: If at 12,500 feet to 14,000 feet for longer than 30 minutes, oxygen must be available to the crew. That’s covered, but do you know if you can handle those altitudes without oxygen, or will you be testing that today?

Also, you’re off the performance charts as there’s no climb rate or glide distance above 12,000 feet. If you know you’re OK physically, one option is to climb to 12,000 feet over Grand Marais, either climbing to a VFR altitude before calling for your IFR clearance or getting the OK ahead of time to depart under IFR and do a climb-in-hold.

Now on to the destination. The expected approach at Major Gilbert Field is the RNAV (GPS) 22, an LNAV with an MDA of 1300 feet. What, no circling MDA? You don’t need one, as a similar approach to Runway 4 is available, both for straight-in and circling. The MDAs for Runway 4 are a bit lower than the other runway, 1240 feet for Categories A/B.

You make a mental note that if for some reason you need the other runway, you’ll have to get creative about circling VFR or just requesting direct to an IAF for the other approach.

The missed approach for RNAV 22 is a climb to 2900 feet, straight out for the hold at DAGAC. The fix also just happens to be a few miles north of the alternate, Ashland, Wisconsin. This is way more comfortable than a hold at JEBTO from the RNAV 4; that one’s out to the northeast over the islands. So, Runway 22 wins out as the lack of a circling approach isn’t much of a sacrifice.

Through the haze, it’s still seven SM visibility, and the Ashland weather station says as much, but over that much water, there’s no visual reference—just like flying in solid IMC, 100 percent on instruments. Are you up for this highworkload cruise over the lake, followed by a reduced-visibility approach?

Some things to contemplate: Are you not just IFR current (that could be months ago), but 30-days current? Are you proficient in flying this aircraft solely on instruments (and partial-panel) to minimums? Are you feeling not just
okay to tackle this flight but great and well-rested after a full flying day yesterday? Do you have an autopilot to help with the workload?

Lesson four: Most good personalminimums checklists don’t include all this, and perhaps they should for any flights with unusual conditions. If, in the end, you go from Maybe to Never, that’s okay—you know more about the capabilities of you and your aircraft.