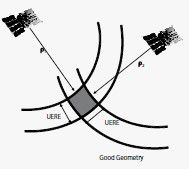 Receiver Autonomous Integrity Monitoring is a mouthful, but it’s descriptive. RAIM independently assesses the integrity of positions reported by a GPS receiver.

RAIM is essential because half a dozen error sources can result in position errors ranging from negligible to unsafe. RAIM detects and, in some cases, corrects these errors. Only then can a pilot know the GPS is accurate.

GPS failures are unique in that degraded coverage moves constantly. If a satellite fails or is taken out of service, it’s not immediately clear what, if any, airspace is affected. RAIM fills the twohour gap the GPS control system can take to detect transmission errors.

Once a second, RAIM uses signals from multiple satellites to produce several GPS position fixes, seeking inconsistencies to determine whether a fault lies in any satellite signal. RAIM alerts the pilot if a consistency check fails. 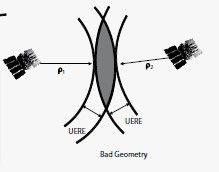 RAIM is available if 24 satellites or more are working. If fewer (a vanishingly small likelihood), an in-cockpit RAIM check will fail. Still, a preflight RAIM check can preclude surprises.

RAIM works exclusively in the horizontal plane and does not support vertical navigation.

GPS receivers require precise clocks. When a GPS satellite transmits a signal, it includes its time and current position. Knowing the signal travels at light speed and when it was sent and received, a GPS receiver calculates the distance to each satellite, called a pseudorange.

RAIM compares the difference between each expected and observed pseudorange and the number of pseudoranges. When more satellites are available than needed for a position fix, the extra pseudoranges should be consistent with the computed position. A pseudorange that differs appreciably from its expected value can indicate a satellite fault or a signal integrity problem like ionospheric dispersion.

The illustration below shows circles centered on two satellites where each circle’s radius is a pseudorange GPS solution. Multiple pseudoranges produce overlapping circles. Allowing for pseudorange error, each ring is guaranteed to contain the actual position of the receiver. The difference between actual and estimated positions is the Position Estimation Error (PEE). The gray area containing your position becomes smaller with more satellites. As you see, geometry dramatically influences the area of the GPS solution.

RAIM then computes a Horizontal Protection Limit. HPL is calculated based on a RAIM threshold and satellite geometry at the time of measurement. If HPL is within the Horizontal Alarm Limit, RAIM is available.

RAIM offers two kinds of fault messages. The first says that insufficient satellites are available for RAIM, meaning that GPS positioning might be wrong. The second occurs if RAIM detects an outlier satellite in the navigation solution. The probability of a false alarm is 1/15,000, so trust these messages. A RAIM failure means it’s time for VORs.

Non-WAAS receivers can optionally use FDE, but WAAS receivers require FDE. FDE permits a pilot to file based on a GPS approach at either their destination or alternate.

FDE applies WAAS corrections if available. In effect, WAAS adds a satellite to FDE. WAAS availability is often shown on the GPS status page and may be titled SBAS as shown above.

During preflight planning, you can visit www.nstb.tc.faa.gov to find out if an LPV approach will be available at your destination. It includes standard GPS predictions. Wide-area predictions are more conservative than actual to accommodate very low-end receivers. You should also check GPS NOTAMs for LPV approach availability.

The inaccuracy is mainly due to ionospheric “billows,” which randomly slow radio signals below light speed. Since GPS relies on timing the signals to measure distance, delays make the satellite seem farther away. Billows move slowly and can be quantified in models or by examining GPS signals received by WAAS ground stations. Three WAAS satellites broadcast correction information to GPS receivers every two minutes, significantly reducing errors. These two radio systems are called differential GPS or DGPS because GPS and WAAS differences are compared.

GPS satellites orbit at an altitude of about 12,550 miles. Each satellite circles the earth twice a day. The GPS constellation is organized as six equally-spaced orbital planes around the earth. Each plane has four baseline satellite slots. With 24 slots, receivers can see at least five satellites from virtually anywhere on earth.

Of the 31 orbiting satellites, 27 are active. The extra satellites may increase GPS performance but are not part of the core constellation. The remaining four are spares. GPS navigators often support 15 or so satellites. Typically seven to twelve satellites are in line-of-sight, but fifteen’s not unusual.

The Estimated Position Uncertainty or EPU is drawn from the Fault Detection and Exclusion algorithm. If you fly in an area lacking WAAS with WAAS enabled, EPU could read higher than usual. Another caution: GPS-derived altitude can be way off.

If you haven’t used your GPS in a few months, it will take some time to acquire almanac and satellite information. Until enough satellites are acquired, you might not see the time or other data. The same happens if you turn the unit off and on again several hundred miles away. 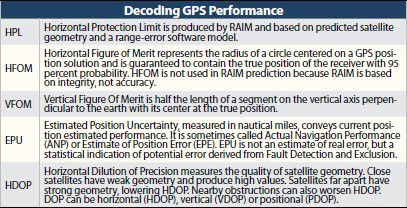 It’s wise to check destination RAIM en route and before descending to land. An approach RAIM prediction is valid for 15 minutes plus or minus the time entered. If unavailable, your unit will not offer a GPS approach or may remove an active approach.

Should an alarm occur on approach outside the FAF, go missed. If inside the FAF, the receiver gives you five minutes to complete the approach but going missed might be smarter. On a nonprecision approach, an alarm must occur within 10 seconds of failure; for an LPV, it’s 6.2 seconds. Fortunately, RAIM outages are usually under five minutes.

Since the FAA’s TSO requirements for non-precision approaches require considerably better satellite coverage than other flight phases, RAIM might not be available for some approaches.

Get a RAIM Check

AC 90-100A tells us that pilots using non-WAAS GPS equipment must confirm timely availability for the intended route via GPS NOTAMs, RAIM prediction in their flight planners, FSS, or sapt. faa.gov (per AC 90-100A). Pilots may alternatively use receiver RAIM prediction. We recommend performing both. If a predicted continuous loss of RAIM greater than five minutes appears along the route, delay, cancel, or reroute the flight to use VHF navigation. Users of WAAS-equipped receivers need not perform the RAIM check if WAAS coverage is confirmed available along the entire route of flight.