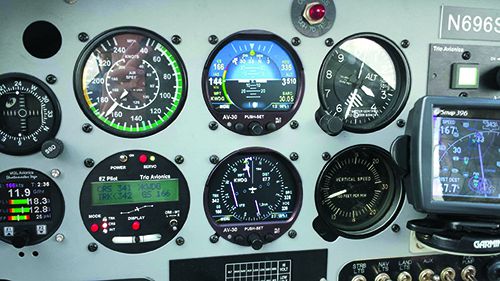 Pricey EFIS retrofits have been available for years, but today the market offers more affordable options. Plus, most all of the choices permit removing the vacuum system, saving weight and space with an all-electric instrument suite totally immune to dreaded vacuum pump failures.

New standards for instrument certification allow blanket approval via AML-STC (supplemental type certification via an approved model list) instead of the age-old TSO certification. This simpler process yields some prices well below $5000. Compared to the cost of maintaining iron gyros and vacuum systems, that’s enticing buyers to pull the trigger on EFIS, and ultimately enhance IFR safety and capabilities in even the most basic aircraft. Let’s see what Aspen, Garmin, and uAvionix have to offer.

What started as a non-TSO instrument for experimental aircraft became one of the most popular primary retrofit flight displays for certified aircraft thanks to a broad AML-STC. Fitting existing 3⅛-inch-round instrument cutouts, the square-bezel (3.4 inches wide by 3.6 inches high) G5 is approved for Class 1 and Class 2 singles and twins weighing under 6000 pounds.

All in, you’ll install two—one as an AI and the other as an electronic HSI (EHSI). In the most basic interface you can install one G5, but a pair of G5s offers redundancy where the EHSI can function as an AI should the primary fail. Each display has a 4-hour backup battery, and they share the same chassis and the same 3.5-inch QVGA LCD color display.

For raw nav data display the G5 EHSI only supports Arinc 429 databus inputs (Garmin GNS and GTN navigators, primarily). Analog navs (such as the venerable King KX 155) require the GAD 29B nav data converter. For magnetic heading display the G5 EHSI interfaces with Garmin’s GMU 11 magnetometer. This is a remote magnetic heading sensor that can feed two G5s. Speaking of remote boxes, if you have a third-party autopilot (S-TEC, BendixKing, and even Century and ARC/Cessna models) the G5 EHSI can provide heading command with that GAD 29B converter.

The G5 AI is a an all-in-one instrument displaying airspeed, attitude, altitude, vertical speed, slip/skid, turn rate, configurable V-speed references and altitude select (for reference or for interface with the GFC autopilot). The G5’s altitude alerting is useful and the feature set is logical. When passing within 1000 and again at 200 feet of a selected altitude, the set altitude value flashes for five seconds. Bust the altitude by 200 feet and the altitude data box changes to yellow text against a black background. There are also audible outputs.

When interfaced with Garmin’s GFC 500 autopilot, the G5 takes the interface one step further and displays flight director command bars. You can’t exactly navigate with the G5 flight instruments, but the built-in GPS receiver (the unit has an external GPS antenna that can be mounted inside the cabin) provides on-screen groundspeed and ground track data. The G5 is capable of handling extreme maneuvers, so if you have an aerobat, it’s up to the challenge. We’ve flown a G5-equipped aerobatic aircraft and the G5 is indeed robust enough for anything we threw at it.

The E5 is Aspen’s answer to Garmin’s budget-based G5s. The E5 is approved under an AML-STC blanketing over 300 aircraft models. Aspen’s E5 combines both an electronic DG/EHSI and attitude display in one device. Keeping with Aspen’s original Evolution 1000 design, the 4-inch-deep solid-state gyro can on the rear chassis slides into the ex isting attitude gyro round cutout, while the bottom portion of the instrument simply sits over the DG cutout.

The E5 has a full complement of flight instruments, but only the attitude and heading are approved as primary instruments. So, the rest of the existing six pack has to stay, as is the case with the G5. Like the G5, the E5 gets nav data via an Arinc 429 input (such as from a modern navigator). Analog VHF nav radios (such as the KX 155) require a remote analog converter unit (ACU). This accessory adds $1000 to the $4995 base price.

With 32,768 colors, 400 by 760 display resolution, and high-intensity white LED backlighting, the 6.0-inch diagonal TFT active matrix LCD screen is noticeably more crisp and brighter than earlier Aspen units. The company said it designed the new display for better dimming and even at the lowest brightness, the screen remains clear. That’s important given its small size and our aging eyes.

The E5 screen is divided into three parts: an upper attitude display, a lower navigation/EHSI display—with 360-degree and ARC compass-rose displays, and a data bar in the middle for GPS groundspeed (GS) and barometric pressure. When any of these values are either invalid or not available, the field is dashed. You’ll need a compatible GPS navigator to display GPS groundspeed. There’s also the numeric display of the current magnetic heading, the selected heading and selected course on the lower nav display.

Since the E5 uses pitot and static pressure input as part of the AHRS attitude calculations, loss or corruption of the pitot or static pressure (perhaps an iced up pitot tube) can influence the accuracy of the displayed attitude data. That’s a bugaboo with other legacy Aspen units; a compromised pitot reference can result in the loss of all primary flight data—even attitude. Refreshingly, thanks to GPS assist, that’s not the case with the E5 when it’s connected to a compatible IFR GPS navigator, including a Garmin GNS or GTN. That’s because the E5 can use GPS groundspeed instead of indicated airspeed as part of its overall AHRS solution.

Like every other Aspen PFD, the E5 comes with a remote sensor module (RSM) that works together with the sensors inside the E5 for 3D magnetic heading and GPS computations. The RSM installs much like an external GPS antenna and its placement in an interference-free area on the top of the fuselage is critical for accurate heading resolution. Choose a shop that’s skilled and experienced.

Garmin recently announced the GI 275, an electronic flight instrument family in a traditional 3⅛-inch round-gauge chassis. Unlike the G5, the GI 275 has full TSO certification, and it can be configured to display most everything you need. It also has capacitive touchscreen, plus a control set that’s accessed with an outer and inner control knob. It has built-in Wi-Fi and Bluetooth for connection with Garmin’s Pilot app.

The GI 275 can be configured as a 4-in-1 flight instrument, an attitude indicator, attitude directional indicator (ADI), course deviation indicator (CDI), horizontal situation indicator (HSI), and engine indication system (EIS). It has a 60-minute backup battery.

There are three variants of the GI 275 and it won’t be uncommon to install multiple instruments to replace existing round gauges, but that won’t necessarily be a budget upgrade. There’s the GI 275 Base, GI 275 ADAHRS and GI 275 ADAHRS+AP (autopilot). The GI 275 ADAHRS model is the primary EFIS with its built-in air data attitude and heading reference system for configuring the display as an AI with airspeed and altitude. 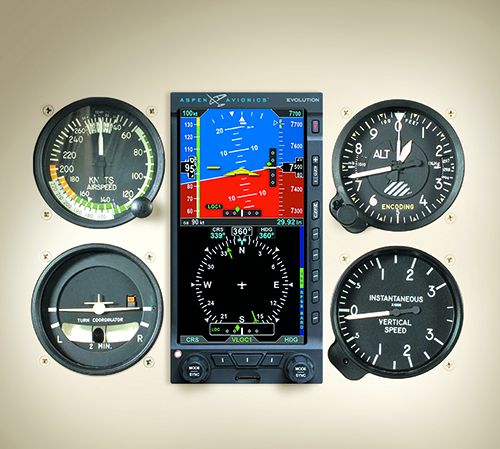 Additionally, it displays magnetic heading (when installed with Garmin’s magnetometer). It can also be configured as an EHSI, while overlaying moving map, terrain, weather, and traffic. Plus, there’s a built-in VFR GPS. There’s also an option for Garmin’s SVT synthetic vision. When paired with Garmin’s GDL 69 SiriusXM datalink receiver, the GI 275 displays satellite broadcast weather. It can also display (FIS-B) weather from Garmin’s GTX 345 ADS-B transponder or the GNX 375 navigator.

The GI 275 Base doesn’t have ADAHRS and it’s essentially an MFD with no attitude or flight instruments, plus it can also be used as an electronic engine monitor. When installed as a CDI or EHSI, the GI 275 is designed to accept a variety of GPS or navigation inputs, allowing up to two GPS sources and two VHF navigation sources. The GI 275 even has an internal OBS resolver for interfacing with third-party GPS navigators. Finally, Garmin’s flagship GI 275 ADAHRS+AP outputs pitch and roll data for driving autopilots. The GI 275 base starts at $2995; EFIS starts at $3995; and EHSI starts at $4295.

But Garmin wasn’t the first to develop a traditional round-gauge chassis with an electronic display. It was Aerovonics (now part of uAvionix) that developed the AV-30 (and smaller AV-20) flight instruments. These instruments don’t yet have FAA approval for installation in certified aircraft, but it’s in the works and we think the 3⅛-inch AV-30 is worth watching. We like what we see so far.

The under-$2000 AV-30 has a highly customizable attitude indicator display that mimics a traditional spinning gyro, but overlaid with data such as indicated airspeed, altitude, baro, AoA, OAT and GPS track data.

It’s natural to compare the AV-30 with Garmin’s GI 275. Both have round faces that will flush mount in a standard 3⅛-inch instrument hole from behind, allowing retention of that molded-plastic panel overlay used in some aircraft.

As noted, the GI 275 family is TSO’d, so it can be primary in virtually any aircraft for any of the supported displays. The AV-30, like the G5 and E5, will be approved by an AML-STC, so your aircraft might not be on the list. Additionally, the certified AV-30 is planned to be primary only for AI and DG/EHSI.

Last, the GI 275 hosts an entire family of displays that far exceeds the standard AI and DG/EHSI in the initial AV- 30. The GI 275 has a touchscreen; the AV-30 does not.

But uAvionix has done something interesting with the AV-30 (and smaller AV-20) by adding transponder controlhead capability for the uAvionics tail‑ BeaconX ADS-B transponder. For more on this interface, see the installation field report in the March 2020 issue of sister publication Aviation Consumer. 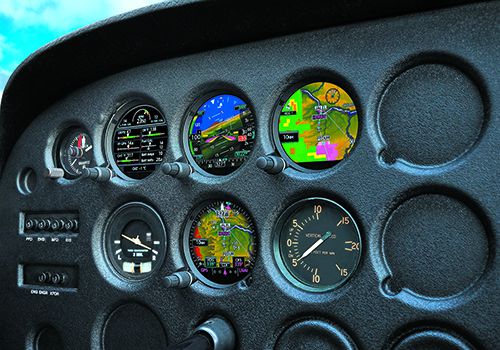 Also worth mentioning—and watching—is Dynon Avionics. Recall that it was Dynon, along with EAA, that earned an STC for its D10A experimental EFIS a few years ago, setting the trend for budget-priced primary EFIS. Dynon is in the process of introducing a fresh primary small-screen EFIS to compete with Garmin, Aspen and uAvionix. We’re keeping tabs on it.

Whatever you choose to fly in the clag, we recommend getting good demos before buying. There’s a lot of data packed in relatively small screens and you’ll want to get a feel for font, screen clarity and the general feature set. You’ll also want to work closely with your shop to be sure the features you want are compatible with your existing avionics, particularly when it comes to autopilot interface. The price can escalate pretty quickly when adding adapters and additional wiring to make it all work. Plus, compare a full-up install with a larger screen EFIS to see where the numbers fall. You might conclude that the larger screen area is worth the extra money