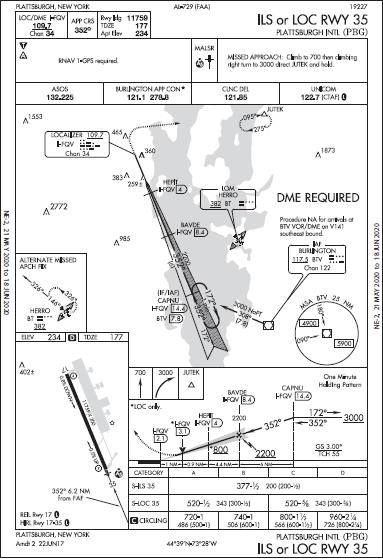 Our IFR avionics are getting evermore capable, allowing us single-pilot fliers to shoot RNAV approaches once reserved for the big iron. While most standard satellite-based approaches have become basic fare, there are now some new notes we’re finding on the charts that require figuring out what the onboard GPS really is allowed to do. This can be an easy check in flight—does the database have it? But sometimes, the answer’s buried elsewhere in the airplane, i.e. on paper. And by the way, we’re not even on an RNAV approach today; we’re going for the good old-fashioned ILS, which is always the former but not always the latter.

Here’s an example of this kind of approach, which we can expect to see in growing numbers. You’re preparing to fly to an important meeting in Plattsburgh, New York, landing at KPBG. While waiting for the low ceilings to come up a bit, you plan for a close-tominimums day.

Given the north winds and the single runway at Plattsburgh, you have two approaches to pick from: ILS or LOC 35 and RNAV 35. The ILS 35’s straight-in mins are 377-½ for all categories, while the RNAV 35 has LPV minima of 427- ½, just 50 feet higher. Usually, the LPV’s steadier glideslope is favored, so why bother looking at the ILS? Low weather, of course.

The low-IFR you see blanketing Plattsburgh and airports a hundred miles around make this the kind of day where another 50 feet could be the difference between making it in or possibly missing at another low-IFR airport.

Clouds are now at 200 feet; you’d like to see it remain steady or improving before you launch. And for the alternate of nearby Burlington, Vermont, you prefer 700 feet instead of the legal alternate minimum of 600. You won’t bother going at all unless there’s a good chance of making Plattsburgh on the first approach.

If the clouds remain low, that 50 feet on the ILS might come in handy. Plus, the LOC straight-in MDA is 520-½, compared to the LNAV MDA of 700-½, so if you need to switch to the non-precision MDA, the localizer’s better.

Your chosen approach is titled “ILS or LOC,” so anyone with a basic VOR/ LOC receiver and course indicator can fly this, right? Yes, but … they’ll also need something fancier to technically fulfill the equipment requirements noted in this particular briefing strip: “RNAV 1 – GPS required.” You have a Garmin GTN 650 for enjoying LPV approaches. But requiring GPS for an ILS approach is new to you. (For a primer, see “The GPS/ ILS Approach,” IFR September 2013).

First off, what’s RNAV 1-GPS? There’s a hierarchy of RNAV classes outlined in AIM’s Chapter 1, Section 2, Performance-
Based Navigation (PBN) and Area Navigation (RNAV). RNAV units with or without onboard performance monitoring can be certified as RNAV-1 (1 NM accuracy 95 percent of the time), RNAV-2 (2 NM) and so forth. The list jumps to RNAV 10 for oceanic operations— further east than we need today.

Along with the associated FAA Advisory Circulars, the AIM also answers some FAQs, such as: Where do I find the type of GPS in my aircraft? Section 2 says: “The Aircraft Flight Manual (AFM) or avionics documents for your aircraft should specifically state the aircraft’s RNP eligibilities … As a safeguard, the FAA requires that aircraft navigation databases hold only those procedures that the aircraft maintains eligibility for. If you look for a specific instrument procedure in your aircraft’s navigation database and cannot find it, it’s likely that procedure contains PBN elements your aircraft is ineligible for or cannot compute and fly.”

The supplement in the POH has the Garmin GTN 650’s paperwork including its Technical Standard Order “TSO C146c” approval, which allows you to fly LPV, LNAV/VNAV approaches, etc. It’s also good for RNAV 1 and 2, meeting the requirement for the ILS 35 at PBG.

If the weather gets worse and warrants more hours of light reading, AC 90-108, “Use of Suitable Area Navigation (RNAV) Systems on Conventional Routes and Procedures,” outlines the array of TSOs for typical RNAV units. The common moving-map IFR units such as the non-WAAS GNS 430 for example, fall under TSO-C129, which requires an alternate means of navigation (i.e. VOR) should GPS integrity be lost.

The AIM adds that RNAV 1 is not to be confused with RNP 1, which is just an additional equipment standard for Required Navigation Performance, aka “on-board performance monitoring and alerting.” Most newer units have this, but some approaches specify “RNP APCH” or “RNP AR” (Authorization Required), which are off-limits to the light GA crowd.

There’s a note on the plan view declaring: “DME REQUIRED.” Of course, the GPS is your DME. The approach is lined with several fixes from the intermediate fix (CAPNU) to the FAF (BAVDE, also identifiable using glideslope intercept per the lightning bolt) and three more leading to the runway threshold. IFRcertified GPS navigators have long been allowed in lieu of DME fixes, VORs, etc. so long as there’s nothing specified otherwise and, of course, all the applicable elements of a procedure are available in your GPS database.

Approaching from the southeast, you’ll load ILS 35 using the Burlington VORTAC (BTV) as a no-procedureturn initial approach fix. This heads straight to CAPNU for about a 12-mile final. As a backup to the ILS glideslope, the localizer MDA is 520, but according to the profile note, you’ll first need to clear HEPIT because the segment from BAVDE requires a minimum of 800 feet for the localizer-only.

The missed approach is: “Climb to 700 then climbing right turn to 3000 direct JUTEK and hold.” Just be clear on how the GPS will navigate to and identify the holding fix. Yours will automatically swap to localizer mode to capture the ILS, then switch back to GPS mode if you activate the missed approach and must navigate to JUTEK, which appears on the planview to be GPS only.

But actually, it’s not. If GPS blinks out for some reason, a well-briefed PIC would know that JUTEK is also 20 DME from BTV on V487, but you’d have to look at the en-route chart to see that. If you did, it’s a good idea to plug in BTV on your no. 2 CDI (if you have one) and have it tuned to the 014-degree radial (V487) or have direct-to BTV activated on your no. 2 GPS (if you have one).

Even if you didn’t know JUTEK was an airway fix or didn’t have a second CDI, the best way to cover yourself would be to determine that a heading of about 085 points you toward JUTEK, after which you’d check in with ATC and regroup when you have the time. Speaking of which, this record-setting approach briefing couldn’t have been
accomplished at altitude, even if you had all the FAA publications available. The hour it took to confirm you’re okay with the approach was enough to see the weather improve at Plattsburgh to 300 feet—still low for the RNAV approach but just fine for the ILS.

The RNAV requirements for non- RNAV approaches like this ILS, while not standard yet, are becoming more common as ground-based navaids and related fixes diminish in number. The same equipment applies, for instance, for Cordele, Georgia’s LOC 10, where the chart’s briefing box, packed full with other notes on minimums, includes “ADF required” in the fine print, along with a big “RNAV 1-GPS or RADAR REQUIRED” in the planview. Just goes to show that RNAV can mean different things in different places. This has become more of the norm than ever, so be prepared by knowing what you have (and don’t have) on board.