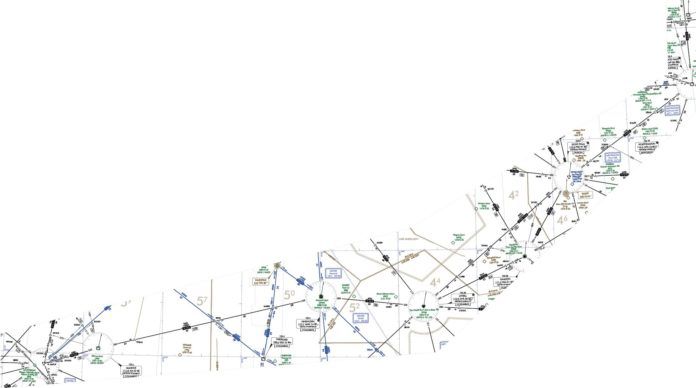 Changing a route in flight happens every day. Just request a new fix or airport with Center and briefly give the reason, right? But if you’re already busy navigating through unfamiliar territory, that extra workload can be difficult. And if you’ve made promises to passengers, adjusting on the fly could result in mental overload, if you let it.

You’re flying two friends from St. Cloud, MN (KSTC) to Scottsbluff, NE (KBFF) but anything west of South Dakota is new for you and your four-seat single. First step: Plot the direct route. KBFF is 469 NM southwest. Headwinds are likely, so figure on over three hours. This is still non-stop with adequate reserves.

Next: Chart review. The first thing you spot is rising terrain as you get into western Nebraska. Your default cruise westbound has always been 6000 feet. But now the MEAs top out at 7500 feet. Also, you want to fly off the airways and RNAV routes, so you can’t just rely on nearby MEAs for safe altitudes.

Time to check Off-Route Obstruction Clearance Altitudes. These start at 3400 to 4000 feet then quickly get up to 6000. The terrain continues to rise towards 8000 feet past Scottsbluff. Uh, we’re not in Minnesota anymore. OROCAs, as defined by the Instrument Procedures Handbook, are for situational awareness and emergency use. While OROCAs provide standard obstacle clearance margins (1000 feet in non-mountainous areas), you can’t count on them. You decide it’s safest to file for 8000 feet.

There’s also the matter of the Lake Andes MOA mid-route. That airspace runs from 6000 feet to 17,999, mornings and afternoons Tuesday through Saturday. Of course, you want to go through at 10 a.m. on Wednesday at 8000 feet. One option is to skim along the airspace floor at 6000 feet to save a few miles, then get 8000 on the other side. Or file for the two-hour break in the MOA activity and hope that works, or stick to 8000 and negotiate routing with ATC. This seems the most practical, so you file FITAS, then the Redwood Falls VOR, with plans to ask Center from there for a shortcut.

The weather briefing that morning shows marginal VFR around your ETA. That’s comfortable, and no alternate is required. However, there’s an icing AIRMET between 3000 and 9000 feet and above 13,000 feet for much of Nebraska. There are no PIREPS along the route, and the temperature aloft forecasts ranges from -10C to 5C.

More decisions. You can re-file for 10,000 feet to stay above the AIRMET, or climb en route if need be. There’s no onboard oxygen, and you don’t know for sure that you (or your passengers, for that matter) will feel any effects at 10,000 feet. At any rate, 91.211 precludes going above 12,500 feet for more than 30 minutes. Flying through an AIRMET with no ice is one thing, but if it starts adhering to the airframe, the situation becomes not just unsafe, but legally questionable. (See “Knowing Ice—Again,” January 2019).

You’ve already committed to taking your passengers this morning, so you decide to keep 8000 feet with a Plan B to coordinate ahead for a climb before entering the AIRMET zone, then descending as soon as possible, while the OROCAs are still below 6000 feet. The nice flight plan you assembled is getting messy with what-ifs and backups, but you’re still on task. While taxiing out, the clearance comes in as FITAS to RWF to ONL, a VOR south of the MOA, expect 8000.

Soon after Redwood Falls, you request direct Scottsbluff. Unable, due to military activity. Descend to 6000 feet direct? Center doesn’t like that either, so now you’re on a more southerly heading to the O’Neill VOR, now 100 miles ahead. The OAT was steady at two degrees C, but a few miles later, it dips a couple degrees and light frost appears on the windshield. You’re not in the official AIRMET, but this is the real deal. Ten thousand feet is now your first choice, oxygen or not, so you report light rime and ask for higher.

By the time you cross ONL, you’re on top and clean again. Next problem: Getting down through the layer, probably with ice, and fly the RNAV 30 approach at KBFF. Now you wonder if you should’ve figured out a route at 6000 feet, or gone further south for warmer air, or even diverted to Ainsworth, Nebraska, just southwest of the MOA. Problem is, you hadn’t briefed yourself or your passengers on the possibility of landing elsewhere. You’re too busy now to backtrack; you’re cleared to 7500 feet and the AIA VOR, a transition to the approach starting at DIVPE. You finally remember that the approach starts at 6700 feet—so much for thinking 6000 would work. Down into IMC you go. The ice is back, but aborting now means returning to the same conditions. At AIA, it’s eight minutes to DIVPE, then a quick turn at HAKAB and down to 5700 feet, where you break out, light rime and all, and see Runway 30 with five miles to go.

That’s right, the cloud bases were 2200 feet AGL/6200 feet MSL, which is why you broke out earlier than planned, forgetting to adjust your brain for the higher numbers. Finally, one good surprise today, and you managed to get the passengers here. From now on, though, you’ll be sure to prepare everyone on board, pilot included, for a possible diversion to prevent a rough road from becoming rougher.

Elaine Kauh is a CFII in eastern Wisconsin, where 10,000 feet is for jumping out of airplanes, not cruising on the airways.