GPS in general aviation aircraft has become ubiquitous. So much so that the FAA’s move to a Performance Based Navigation (PBN) world based primarily on the Global Navigation Satellite System (GNSS) is well underway. We are already seeing the cancellation of “redundant” and “underutilized” VOR (and NDB) approaches. For en-route navigation, we have the Minimum Operational Network (MON) initiative, which plans to reduce reliance on VORs and the associated Victor airways in the Lower 48 while retaining just enough stations to act as a backup to a possible widespread GNSS outage. The goal is to shut down a little over a third of the VORs by 2025.

Despite the prevalence of IFR GPS navigators, not all aircraft are so equipped. Or, even if they are GPS equipped, some pilots still prefer to fly in the familiar comfort of Victor Airways, whether they use VOR or GPS navigation. This raises questions about what to do as VORs and their associated airways disappear.

MON isn’t exactly the answer since it is designed for a GPS world in which the GPS is unavailable. It will guarantee an aircraft is always within 100 NM of an airport with an ILS or VOR approach, but the route can be more circuitous. And what happens when the most convenient VOR is down for maintenance?

To illustrate, while not part of the MON initiative, the Bradley, Connecticut (BDL) VOR was decommissioned in 2012. It’s similar to what we might see in a MON world: a Class B or C primary airport with no direct Victor airways and fewer VORs around the edges. Our VOR-only flight is from Danielson, CT (LZD) to Kingston-Ulster, NY (20N). Direct is through the heart of the Bradley Class C but there’s no VOR there. With the surrounding VORs decommissioned (Putnam, PUT; Norwich, ORW; and Pawling, PWL) decommissioned, our best choices are off-airway routings via either Westfield (BAF) north of BDL or Hartford (HFD) to the south. Both routes are within the updated MON service volume, 70 NM at 5000 feet above the VOR transmitter. We file via HFD.

We depart Danielson with our clearance, contact Departure, and begin to receive vectors. Then, Yankee Approach offers us direct to our destination. Our only certified navigation equipment is a dual VOR setup with DME. But we have our tablet EFB with its moving map with “own ship” depicted. We know it’s not approved for primary IFR navigation. But could we, as I have heard some suggest, use dead reckoning for primary navigation and our EFB for “situational awareness”? Is dead reckoning a proper and viable form of IFR en-route navigation or is DR “dead” for IFR?

“RNAV” means “area navigation,” flying point to point. It may or may not be defined by ground-based navaids. It is not tied to a specific process or box. A modern IFR pilot flying direct to destination with the latest Garmin or Avidyne navigator is engaged in area navigation. So is a VFR pilot using dead reckoning and pilotage to fly visual checkpoints and follow powerlines and lakes.

I suspect when some talk about dead reckoning as their means of navigation, they are really talking about off-route radar vectoring using a non-certified GPS for situational awareness. Many of us did that in the early days of GPS when IFR-certified panel mounts were the exception. The most honest form of the conversation went something like this:

“Unable direct, but I have a handheld GPS and it looks like a heading of 320.”

That’s reader vectoring over what AIM 5-1-8 refers to as a “random impromptu route”—an off-airway direct course from present position to a NAVAID, waypoint, fix, or airport. Unless to a location in the database of an IFR-certified GPS, it must be done in a radar environment with ATC monitoring the flight.

“Dead reckoning is navigation solely by means of computations based on time, airspeed, distance, and direction” [Pilots Handbook of Aeronautical Knowledge]. If you are using dead reckoning for “primary navigation” under IFR, it means you are using those calculations to navigate the U.S. National Airspace System (NAS). If you’re using your EFB for “situational awareness,” but that means it’s no big deal if it overheats or runs out of power while you are in a solid cloud deck. You continue on your clearance through the middle of Class B airspace in the clouds or at the MEA through the mountains based on your preflight calculations of winds aloft. You don’t even need to report the malfunction to ATC under §91.187(a).

True DR as a primary means of enroute navigation in the NAS today is as impractical as IFR en-route flight in uncontrolled airspace. But what do the regulations and FAA guidance say?

According to §91.205(d)(2), “no person may operate” an aircraft under instrument flight rules unless the aircraft has “navigation equipment suitable for the route to be flown.” For non-VOR area navigation, “suitable RNAV” is a “system that meets the required performance established for a type of operation, e.g. IFR.” It must “meet any route performance criteria that may be prescribed…” [§1.1 in the regs]. The regulation defers the details to FAA guidance material. 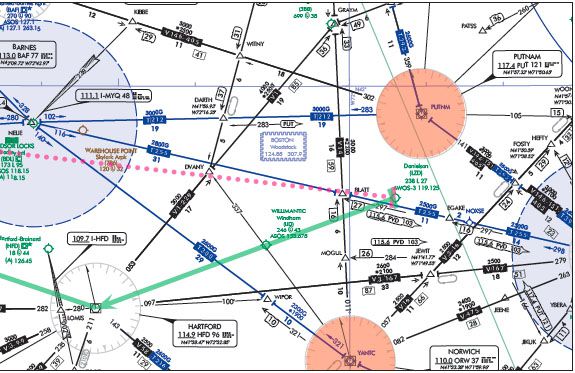 The “route performance criteria” is the Required Navigation Performance (RNP) capability of the equipment used. Generally, it’s the lateral navigation accuracy required at least 95 percent of the time. For en-route IFR, RNAV 2 capability is required—lateral accuracy within two nautical miles. It gets tighter as we move to busier airspace and closer to the ground. RNAV 1 (1 NM accuracy) for terminal operations including RNAV SIDs and STARs; RNP APCH certification for instrument approaches. “RNAV equipment must meet system availability, accuracy, and airworthiness standards.” [AIM 5-1-8.d.] As FAA Order 8900.1, the Flight Standards Information Management System (FSIMS) guide for FAA operatives, puts it, RNAV used for IFR must meet “the performance criteria for the proposed area of operation,” the precision mandated to allow for separation from traffic and obstacles.

Some are familiar with the military use of TACAN “point to point” navigation. To simplify and analogize to civilian VOR/DME, the pilots triangulate the signals in a way that permits them to navigate from one VOR/DME location directly to another. If interested in the methodology, I recommend Chapter 6 of the Navy’s Flight Training Instruction, Primary Instrument Navigation manual. But as reliable as it has historically been, TACAN point-to-point has moved to a disfavored position when flying in the NAS, as this excerpt from the current Air Force Flight Operations manual (11-202, Volume 3) shows:

“Pilots will not file a flight plan nor accept a clearance that requires navigating direct to a navigational fix unless the primary navigation equipment onboard the aircraft is certified for the appropriate RNAV capability. Pilots of aircraft without the appropriate RNAV capability will reply with “unable” when given a clearance to proceed direct to a fix. ATC may provide radar vectors or an alternate routing under these circumstances.”

So, not even a navaid-based system used by the military is a legitimate method of IFR navigation, let alone one based on E6B calculations. It just doesn’t meet the required performance criteria.

The reality that dead reckoning simply does not meet today’s requirements for point to point navigation does not mean IFR DR does not exist. It does. DR is specifically permitted and even necessary at times.

VORs have both service volume and line-of-sight limitations. The result is gaps in signal coverage, typically in mountainous areas. These gaps are the MEA GAP we can see on some airways. The Instrument Procedures Handbook (FAA H-883-16B), describes how to treat them: “Proper flight planning will help pilots prepare for MEA gaps by insuring that appropriate maps are available as they may need to dead reckon through the gap. Calculating the ground track (with adjustments for winds) before and after the gap will also help to stay on course when navigational course guidance is not available.”

Navigation gaps are limited. Only one gap is permitted in a VOR-to-VOR segment. The entire segment cannot be a gap, and the gap must be straight, with no turns. The maximum length of the gap is zero at sea level and increases linearly to 65 NM at 45,000 feet MSL. In the example of V134 northwest of Carbon VOR, the gap must be less than 19 NM. At an MEA of 3200 feet the maximum gap is about 4.5 NM.

Some approaches have dead-reckoning legs. Consider the segment from LATHA to the extended final approach course leading to the IF at PUWGO on the KSPI VOR/DME RWY 31 in Springfield, IL. If we view the approach chart in the en-route context, we will see there is no ground-based course guidance between LATHA and PUWGO. Accordingly, the usual transition route symbology—a course line with altitude on top, course in the middle and distance on the bottom—is gone. In its place is, a note with instructions telling us how to get there via dead reckoning. Fly a heading to approximate a 246 course for 7.9 miles until you intercept the localizer where, if your wind correction is perfect, you will be 4.5 miles from PUWGO. That’s the best they can give us under TERPS and procedure design guarantees in this terminal environment. 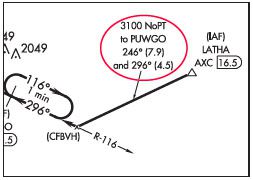 Another approach example is presented by the RNAV (GPS) 10 approach into KGKT in Sevierville, Tennessee. The note, “LNAV/VNAV: Fly visual to airport 102° – 3.2 miles” appears in both the plan and profile views. This is a published visual flight path or visual segment [AIM 5-4-5]. These exist at the end of the final approach segment in limited cases to deal with obstacles. Here, the instruction is limited to BARO-VNAV systems, but it can exist with other systems. Although we would use whatever guidance we had available, the charted heading and distance are “approximate.” It is designed as a dead-reckoning course, although we are expected to have the minimum approach visibility, remain clear of clouds, maintain visual contact with the ground, and visually avoid obstacles when we descend below the MDA. 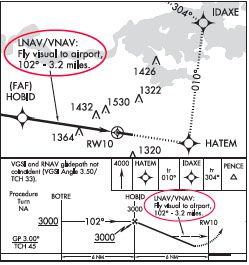 Obstacle Departure Procedures based on ground navaids can have dead-reckoning legs. FAA Order 8260.46C, Departure Procedure Program, mandates, “ODPs must be developed using ground based NAVAIDs, RNAV, or dead reckoning guidance wherever possible.” A DR example is the ODP out of Luray Caverns, Virginia (KLUA). Nestled in the Shenandoah Valley between two mountain ridges, the ODP departing Runway 22 calls for a “climbing left turn heading 200° to intercept LDN VORTAC R-230 to 5000 before proceeding on course.” If you plot that heading and intersection from the midpoint of the KLUA runway on a Sectional or Low Enroute chart, you find you will be dead reckoning approximately 4 NM through the valley as you climb at the nonstandard climb gradient of 400 feet per nautical for the first 4000 feet.

The important thing to note is that our examples of authorized dead reckoning are exceptions. They all involve specific situations in which the course has been vetted for obstruction clearance on the assumption that wind conditions may blow us significantly off-course and yet still be safe for us to fly. As a more general proposition, dead reckoning might have been fine for Lindberg’s Atlantic crossing, but it has no real place in the modern IFR en-route system. 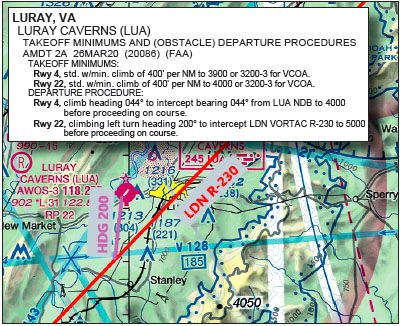