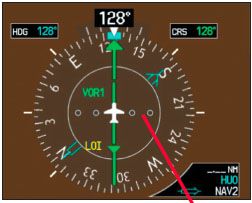 Garmin has sold over 16,000 Garmin G1000 units since its introduction in 2003. Properly used, a G1000 can make you look mighty good trekking the skies under IFR. Pilots gravitate to its feature-rich GPS capabilities. Yet too many pilots shortchange themselves if they neglect the machine’s considerable VOR resources.

If your G1000 lacks WAAS, then its use under IFR requires an alternate approved and operational means of navigating the proposed flight route, per AIM 1-1- 17.2.a.2. Practically speaking this means VOR. If your G1000 is WAAScapable, it requires no other radio navigation equipment. Unsure? Go to the AUX MFD page and press the SBAS button. The unit is WAAS-equipped if WAAS is checked.

AIM 1-1-3.f reminds us that pilots flying GPS—or WAAS—equipped aircraft that also have VOR/ILS avionics should diligently maintain proficiency in VOR and ILS approaches in the event of a GPS outage.

The Minimum Operational Network is the VOR-based alternative means of navigation should GPS fail or become unavailable. The MON is useful only to a pilot who is skilled in VOR navigation. Built on about 600 strategically located VORs, you are at 5000 feet MSL or higher outside the Western U.S. Mountainous Area the MON can lead you to an ILS or VOR approach within 100 NM that doesn’t need GPS, ADF, or DME. But, do you know how to use your G1000 for VOR navigation, especially if there’s no GPS position to drive the moving map and other sensors?

(Taking advantage of WAAS as a sole-source system, some newer GPS navigators exclude VOR receivers. Unless you have and retain a VOR receiver in the panel already, this seems a false economy. If GPS fails, the pilot is left with no chair to sit on if the GPS music stops.)

Like any VOR, the correct order of operation is essential. First, tune the desired VOR just as you load communications frequencies.

Next, the G1000 automatic identifier attempts to read the station’s Morse code. It won’t be instantaneous, but if it works, there is no need to listen to the audio identification. (AIM 1-1-3.c) Sometimes a VOR plays the ID too fast or reception isn’t sufficient for the G1000 to decode, so you must identify the VOR by ear. Push the NAV volume knob to disable the audio filter that normally suppresses the tone. Again, read the fine print: PUSH ID. The letters “ID” appear between the standby and active frequencies. If there is no tone, the station is unusable even if it seems to work. Sometimes TEST in Morse code (− • ••• −) is sent, which the G1000 cannot decode.

If the VOR also has DME, each transmits its ID if it’s working but synchronized, so they don’t step on each other. The DME ID is sent once for every three or four VOR IDs. If the VOR fails, the DME repeats about every 30 seconds. The VOR ID is at 1200 Hz. The D M E tone is higher at 1350 Hz to help you tell them apart. (AIM 1-1-7.f) 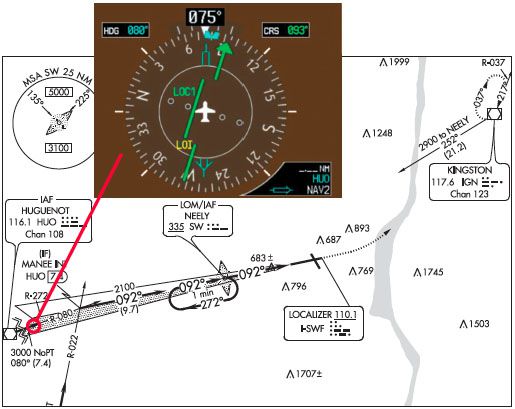 Next, press the CDI button repeatedly to select which NAV source to use: VOR1, VOR2, or GPS. If you choose VOR1, the NAV1 inner frequency turns green, meaning active. Press CDI again to select VOR2 on NAV2. Use the inner triangular CRS button symbolizing a course pointer to center the deviation bar. You can center or “sync” the cursor instantly by pressing the button, as the fine print says. The CDI always centers on the green TO arrow. If you want FROM, rotate the course 180 degrees.

The absence of a deviation bar means no working VOR is selected, or with the magenta GPS bar, no waypoint ahead exists.

You are flying southeast, navigating along V167 via GPS. You cross FITRE on the HNK 128 radial at 20 NM. Lacking a cross radial, the only way to identify it is with DME or GPS. The GPS rolls up to 20 NM, and you’re there.

Moments later, the military cranks up its airborne GPS jammer as published in the GPS NOTAM you overlooked. The GPS deviation bar is replaced by a yellow LOI, meaning Loss Of [GPS] Integrity [monitoring]. The G1000 Pilot’s Guide instructs us to crosscheck with other NAVs. Uh, okay…

The flight plan knows only airports, intersections, GPS waypoints, and VORs in terms of lat/long. It knows nothing of radials unless you program one.

Back in the Cockpit

Your first thought is to stay on course. Push the NAV button to put the white NAV1 standby frequency in the cyan box. Enter the HNK VOR frequency of 116.8, then flip it to the inside box. The G1000 quickly identifies the station, but the frequency only turns green once you scroll through the CDI source button and select NAV1. Done promptly, you’ll be close to the airway. Turn the CRS knob to the HNK 128 radial. The CDI now shows the VOR behind you, centered.

Get ready to identify the next fix, KERRI. Whoops, that’s a GPS T-Route. Look again, though. You can identify it off the HUO VOR’s 357-degree radial. Now’s the time for that bearing pointer because it spares you from having to flip-flop the CDI between HNK and HUO VORs.

A bearing pointer is very intuitive: it always points toward the station. Oldtimers call it a “bird dog.” It’s simple to understand and virtually no work to use.

To prevent confusion, consider standardizing with NAV1 always operating the CDI for course steering, and NAV2 driving the bearing pointer to identify cross radials. Accordingly, enter HUO’s frequency of 116.1 into NAV2 standby and flip it to the active frequency.

The needle swings immediately to aim at HUO. Read the back of the needle to see that you are crossing the HUO R-346. You are not yet at KERRI because the HDG bug is set to 357 degrees. The needle will turn clockwise until it reaches 357.

Pilot and ATC transmissions hopelessly clog the radio. You might as well be NORDO. You decide to land, but where? Looking down the road, you spot a MON airport at Stewart International.

SWF’s approach charts show that Runway 9-27 has ILS approaches at both ends. It’s a PIC moment because going to Stewart means deviating from your clearance. But it’s a legitimate emergency.

Nearing the aptly-named WEARD intersection, you can fly V489 to HUO, an IAF for the ILS 9. There’s a sharp 120-degree left turn at HUO from about 200 to 080, but you can fly safe charted routes. As set, you can identify WEARD without any navigation changes. You preset HUO in NAV1 standby. Nearing WEARD, you start a right turn to 199. The bearing pointer turns with you to help you roll out on course. You swap HUO into the NAV1 active box, and it shows green. Set the CRS to 199 or, more quickly, press CRS CTR to get close. The bearing pointer and the CDI both point to HUO. Cool.

En route, you anticipated what happens at HUO. You turn left to fly the 080 radial, then join the I-SWF localizer at MANEE. You set the localizer in NAV1 standby. But how to track the 080?

Again, the bearing pointer can help. HUO remains set in NAV2. When the needle flips, use it to turn left to 080. All you must do is swap the LOC into NAV1. It will show the localizer to the left. Thinking ahead like this, if the LOC needle does not display correctly, you will know immediately. Although the CRS knob is inactive on LOC frequencies, set 092 as the inbound course to remind you what to fly.

Concerning the CDI, you are forewarned of HUO station passage when the deviation bar starts wobbling as you near the cone of confusion. The green arrow will flip to FROM. You can turn early to ease the sharp turn.

Bearing pointers do not work on LOC frequencies because LOC signals contain no azimuth information, as do VORs. Otherwise, they have lots of creative uses. For instance, if you tune a VOR and the deviation is off-scale, the bearing pointer can confirm you are flying it correctly.

Joining the localizer is an easy 12-degree turn. You don’t need ADF to identify NEELY. On the glidepath, you cross NEELY at 2100 (2096) feet.

As if this flight wasn’t odd enough, you hear ATC call a military jet and issue “Stop Buzzer.” The jamming stops, and GPS returns to normal, but too late!

You only have 11,817 feet of runway. Heavy jets do touch and goes here. You can land and take off at least four times in a Cessna 152. Take my word for it.