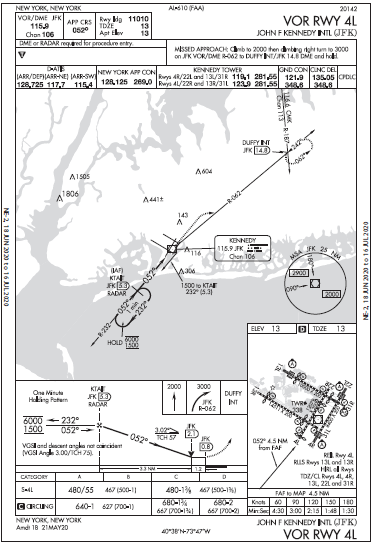 Over the past months, some of us decided that flying was essential and a social distance of 6000 feet was a thousand times better than six. They got a rare treat: The Class Bravos were their playground. We heard stories of near silence on the frequency in NorCal/SoCal and Boston controllers giving full-length low passes of the runway before beseeching the pilot to “please tell your friends.” One pilot completed a low approach to Newark International in visual conditions and asked New York Departure what altitude he should fly on his way home. The controller replied: “Any altitude you want.” It’s the end of times, folks. Or, is it?

Fun in the Class B

If you didn’t get your Class B jollies while you could—or even if you did— fire up the sim with the airplane on the ramp at Poughkeepsie (KPOU) for this rapid-fire round-robin of NYC’s Class B trifecta. To make this realistic, dial all frequencies for towers and TRACONs, and get each ATIS as you go. Your first stop is LaGuardia (KLGA). Your clearance is DUCHS8.POU PWL NOBBI.NOBBI5 at 4000. Use real-world weather if you can, or give yourself some fair-weather northerlies. Depart the best runway and assume you get direct PWL on reaching the first altitude listed in the departure for the runway you used. From PWL flow right into the NOBBI 5, but hold as published at Carmel (CMK). Spin long enough to prepare for the KLGA LDA-A and update any Approach frequency you should use. Leave the hold with instructions to cross HAARP at 3000 and depart CRAWLY heading 190 to intercept the localizer. Fly to the MAP—at which point, look out the windshield, suck up the gear and flaps, pour on the coals, and make a high-speed full-length low pass of Runway 22. Then zoom up to join the published missed to PROUD. While you spin at PROUD, get the Kennedy ATIS and tune the approach and tower frequencies. Then fly direct to the JFK VOR at 3000 for the VOR Runway 4L at Kennedy (KJFK). Missedinstructions will be to fly heading 310, climb and maintain 3000. Fly the approach to straight-in mins and make the same “Yee-haw!” pass down the runway. Zoom up and fly the assigned missed. When able, go direct TEB to cross at 3000 for the VOR/DME-B at Teterboro (KTEB). Change all frequencies to what you’d expect from the chart, including getting the ATIS. The moment you can descend below 900 feet, pick either Runway 24 or 19 for one more low pass and fly the published missed to PATRN. Your last airport is Newark (KEWR). Plan the ILS Runway 22LCAT II & III. Special authorization? Consider yourself promoted during a period of national emergency. Keep changing frequencies as you would have to and keep your speed up until established. Ditch the GPS and set up everything you would need to fly this approach—all of it—with only ground-based navigation. To end this sim challenge, do an instruments-only blind landing on the Newark pavement. Try not to crash and shut down the airport for hours. Not that it matters much these days anyway. 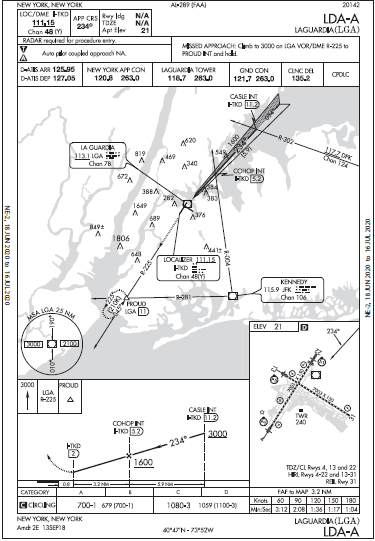 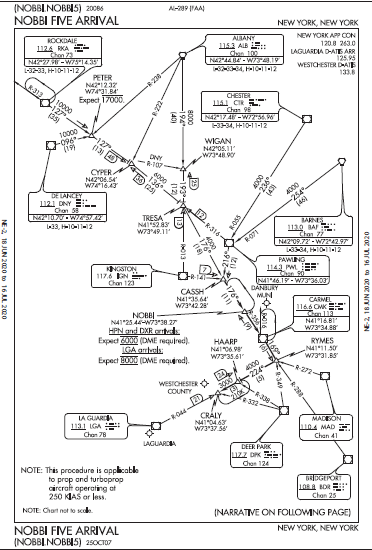 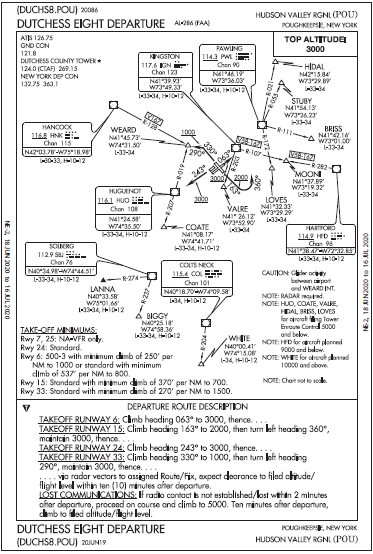 How’d you do? How many tries did it take you to nail it? If the answers are, “No problem,” and, “Well, just one, of course,” then don’t bother with any more of these sim challenges. If, however, you struggled like the rest of us, congratulations on getting through. Now, answer these questions to see if you caught everything. 1. If you got the DUTCHESS 8 for KLGA in the real world, which fixes would you actually expect? 2. When did you slow down approaching CMK? What did you use to fly the hold, on what course and turning which way? 3. If you didn’t have a moving map (or three) how would you anticipate the turn onto the KLGA localizer? 4. Do you have to worry about a late missed at KLGA after that low pass? 5. What altitude did you fly outbound from the VOR on the KJFK approach? How can this approach not require DME? Which way did you turn after crossing the VOR? Which tower frequency did you use during the low pass? What altitude did you use to turn on the missed? 6. What altitude did you use from PATRN to the IAF for KEWR? What heading did you fly after the IAF? Did you get all the VORs dialed in for the approach including the missed? Identified? 7. What speed did you use for the Newark approach … and how did you decide when to flare? 8. You read with interest the article on Page 6 about CAT II ILS for GA and decided to equip your Bonanza. What minimums would you use at Newark? How high above the TDZE will you be at that point? 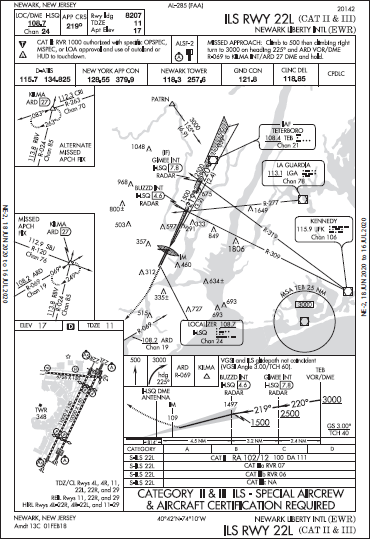 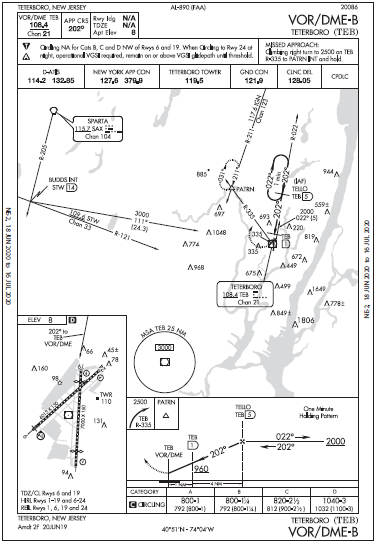 Possible Answers (Your Mileage May Vary)
1. Per the notes, for tower enroute control you’d expect HUE, COATE, VALRE, HIDAL, BRISS, or LOVES. But we needed something you could do non-radar. Other fun departure note: Beware of glider activity if you’re heading for WEARD. 2. The ground-school answer is three minutes, but in the real world, slowing early—with ATC permission—can alleviate holding all together. If you do hold, and use GPS, just put the hold in your flight plan. If that’s not an option, a simple OBS mode on CMK or direct to CMK on a course of 196. But your holding fix, CMK is a VOR, so you could ignore the GPS altogether and do it old school, just with a timer and your VOR. All four holds on the arrival are left turns. 3. Keep LGA R-044 in view (from the arrival). The localizer is closely aligned with V-99, which is R-055. About full scale on one CDI should have you centered on the other. 4. Um, yeah, there’s a city with skyscrapers. But these are practice approaches in VMC, so it’s on you. Still, when you practice IFR procedures under VFR don’t simply count on someone else watching to keep you out of trouble. 5. It’s 1500 outbound to KTAIT. Hold that until inbound with KTAIT radar identified, and these days New York might actually have time to do that. Tower for 4L is 123.9. Way past the MAP is a no-man’s land for altitude. However, Tower knows what you’re doing and is probably expecting you to treat this like a departure—turn above 400 feet AGL. 6. It’s 3000 PATRN to TEB, so you should have climbed 500 feet. The IAF is TEB, and then it’s a VOR radial to GIMEE, but we’d probably all just join the loc—especially using JFK for step downs and position awareness, and then ARD and either RBV or SBJ (or DME) for the missed. Man, that’s a bunch of frequencies in short order. And that’s not even looking at the alternate missed or counting the com changes. 7. Slowing on the ILS is a core skill, but also you need to configure for landing. Flare? Without the radar altimeter it would be tough, but you could start slowing your descent at 40 feet or so to establish about -150 fpm and wait—a float plane technique on a lake-wide target. Yours is only 150 feet wide, but at least it’s over two miles long. 8. The first minimums line is for you: “RA 102/12.” That’s 102 feet on the radio altimeter and 1200 feet visibility, from runway visual range (RVR) measurements. CAT II DA is normally 100 feet above the touchdown zone, which would be 111 feet MSL on your pressure altimeter. The ground below the exact center of the glideslope at 111 feet MSL is a bit lower, thus the 102-foot RA reading reflects that difference between the RA and the 100-foot DA. The free online div table editor allows you to create and convert nice grids for your websites. Please subsribe for an HTMLG membership to stop adding promotional messages to the edited documents.