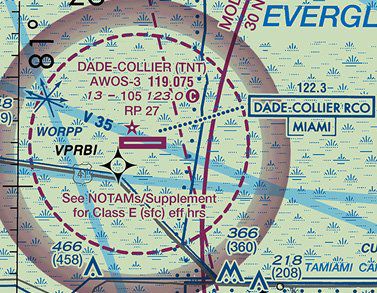 As you probably know, there have been two powerful forces that address the possibility of reducing but not eliminating circling approaches. First, that’s a good thing because circling approaches in low IMC are much higher risk than landing straight in. One force is the proliferation of straight-in RNAV (GPS) approaches to many runway thresholds, many of which can be flown to Localizer Performance with Vertical Guidance (LPV) ceiling and visibility minimums.

Do You Want to Circle?

Nevertheless, the instrument rating Airman Certification Standards (ACS) requires circling approaches: “Circling Approach: Maneuver the airplane, at or above the MDA, 90 or more from the final approach course, on a flight path permitting a normal landing on a suitable runway.” Clearly, we’re supposed to be able to circle.

Let’s consider a situation. We are flying over the Florida Everglades in low IMC. Our alternator just died, which clearly counts as an emergency in IMC. So, we must land. Now! Wind is blowing from the west at 25 knots and we are close to Dade-Collier Transition and Training Airport (KTNT). Although it used to have three approaches to Runway 9—an ILS, an NDB and an RNAV—the only one now available is the RNAV (GPS) RWY 9 approach. With that wind, we certainly will not be landing on Runway 9, even though the runway is 10,500-feet long.

We could consider using Runway 27 instead but will have to do a circling approach with one-mile visibility and a minimum descent altitude (MDA) of 400 feet or higher, depending on approach category. We chuckle for a moment at the old concept that legal doesn’t necessarily equate to safe as we realize that there’s no way we want to be circling an unfamiliar airport at less than 400 feet AGL and only a mile visibility.

What are the alternatives? We could still go ahead and circle to land on Runway 27 or go to another airport with favorable winds with straight-in approaches, perhaps even with vertical guidance. In thinking about going elsewhere, we think about the battery and can’t remember the last time it was replaced. We might not have many more electrons, and if the battery goes, we’ll be completely out of options.

Fly a Visual? In IMC?

But we have another choice. We all know that visual approaches and charted visual approaches (See “Charted Visuals” in IFR Magazine, February 2018) are legitimate approaches issued to IFR traffic during operations in VMC. But there is another visual approach that is available. Call it the G-Visual for Garmin Visual. It’s available in Garmin navigators such as the GTNs and later model G1000’s. It uses WAAS to provide straight-in lateral and vertical guidance to many runway thresholds, even if a runway already has a straight-in published approach. It is a safety feature, especially when flying VFR into a new airport or approaching an airport at night.

If this becomes your chosen option in IMC, and considering the surface-based controlled airspace, it must be done under a declared emergency. We do get some protection from the regulations that we should definitely use. Part 91.3(b) states, “In an in-flight emergency requiring immediate action, the pilot in command may deviate from any rule of this part to the extent required to meet that emergency.”

So, there it is. If you declare an emergency, you go do what you need to do. If that means flying a visual approach procedure that’s not been surveyed or flown for obstacle clearance, then you do it and hope for the best.

There are many airports that don’t have published approaches; however, this number is shrinking over time. Take for example Everglades Airpark (X01) on the southwest coast of Florida nestled among mangroves, swamps, and brackish water (but excellent stone crabs in Everglades City). The airport does not have any published approaches but has G-Visuals for Runways 15 and 33. Of course, these are not instrument approaches and are intended to provide supplementary guidance only in visual conditions. But, as above, if I found myself in a serious emergency and absolutely needing to land at X01 in IMC, even though it is uncontrolled Class G airspace from the ground up to 1200 feet AGL, I would still declare an emergency because I would most likely be descending from controlled airspace.

G-Visuals add a level of safety in providing many runways with lateral and vertical guidance that is especially useful at unfamiliar airports and at night, but strictly for VFR use. G-Visuals all use a three-degree glideslope but it has not been properly surveyed. So, pilot beware. But if an emergency calls for an immediate landing in IMC, a G-Visual is better than blind flying. However, it has to be treated as an emergency procedure, and that means declaring an emergency and squawking 7700. And don’t forget to write-up a NASA report.

Safety is relative. For example, walking alone at night could be safe or dangerous depending on where you are. There are degrees of safety and to answer the leading question requires looking at the big picture.

If you’re planning a flight to an airport where the available approaches don’t suit you, no, merely flying the G-Visual is not safe. But, add our scenario where the weather is at minimums (or a bit below), you’re running on battery alone and doubt there’s enough battery to get you safely to another airport, then a G-Visual becomes more attractive.

Again, it’s degrees of safety. Which do you think would be safest in the scenario in the article? Would you land on Runway 9 with that tailwind? Would you circle to Runway 27 on the Runway 9 approach? Would you risk ending up completely dark by going elsewhere? Or would you use the guidance from the G-Visual approach to land straight-in on Runway 27?

It continues with a note: “If the GTN does not have a valid terrain database, advisory vertical guidance is not available for visual approaches.”

To drive this home to the pilot, once a visual approach is selected, one of two cautionary messages pops up, with the difference being between displaying the glidepath angle and threshold crossing height as shown in the note depicted, or simply displaying “NO VERTICAL GUIDANCE” to stress that fact that Garmin doesn’t think the computed glidepath is safe. —FB

Luca Bencini-Tibo hasn’t had to do this. But now that he’s researched it, he’s prepared if he is ever left with that as the best option.